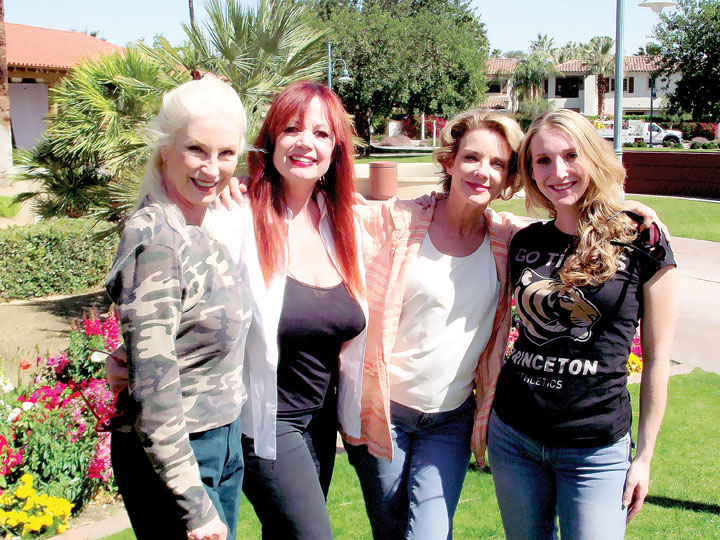 at the Palm Canyon Theatre

The Coachella Valley is filled with many choices of entertainment, so I ask, when was the last time you enjoyed live theatre?

We are fortunate to have a very inspiring play at the Palm Canyon theatre, “Steel Magnolias” by Robert Harling. The engagement is this weekend only at 8 p.m. on Friday, March 30, and Saturday, March 31, with a matinee at 2 p.m. on Sunday, April 1. Tickets are $25 and available by calling (760) 323-5123, at the door or online at PalmCanyonTheatre.org.

The show is directed by Steve Fisher with lighting design by Phil Murphy, scenic design by J.W. Layne and costumes by Se Layne.

“Steel Magnolias” is starring Judith Chapman (from The Young and the Restless) as M’Lynn, along with local celebrities Joey English as Ouiser and VJ Hume as Clairee. Also featured in the show are Denise Strand as Truvy, Heidi Harper as Annelle and Terra Marine as Shelby.

Set in Truvy’s Beauty Parlor in Chinquapin, Louisiana, “Steel Magnolias” illustrates how the lives of six distinctly different women interweave through the unending cycle of birth, marriage and death.

For those who know Joey English, the thought of her playing the role as Ouiser, a grouchy, two-time widow, who always looks at the negative side of life, one might not be able to picture it. But then again, that is what makes her such a talented actress. “I enjoy playing odd characters,” English said with a smile and whispered, “Plus, I’m doing it without eyelashes.”

She was very proud to say she “discovered” Terra Marine at the after cast party from “Sordid Lives.” Marine graduated with a degree in Theatre and spoke to English, who put her in touch with Se Layne. Marine auditioned for Annelle, but they wanted her to play Shelby.

Also involved in this production is English’s grand-daughter, Shelbey Mae, who is the “unofficial” production assistant to director Steve Fisher, who directed Mae when she starred in Palm Canyon Theatre’s production of “Annie.”

“The interesting thing is there are no men in the stage play, it all takes place in one place, the beauty shop. It talks about a lot of things that happen in the South, that are universal, like “Sordid Lives” in that sense. There’s a lot of values that go on in the South and women bond strong and they don’t cry in public, and this play talks about that.”

The interaction of the characters is very emotional. It brings lots of laughter and many tears. “It’s really a tear jerker, but then it comes right back out with the steel magnolia Southern grit.”

Judith Chapman is back in town after her triumphant “Vivian” and is being called the Master Thespian. “Judith is commuting from LA just to do this with us. She is phenomenal as M’Lynn. We try to do something together every year.”

Thanks to the Layne Family and the City of Palm Springs, we have a wonderful theatre with top notch actors, directors, set and costume designers. They are currently in rehearsal for their production of Brigadoon opening on Friday, April 13.