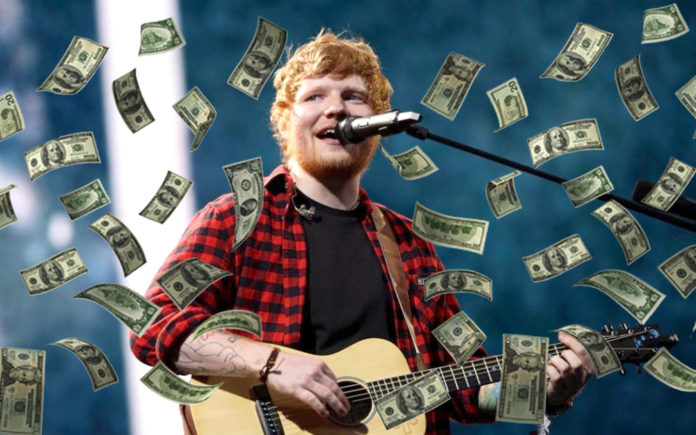 On Friday, Luke Bryan closes out the Stagecoach Music Festival and a three-week span where Empire Polo Gardens was the center of the music universe.

Looking at data compiled by Billboard and Forbes for 2018, the musical performers that earned the most for the year was U2 at $118 million for approximately $30 million a band member.  Coldplay was second at $116 million. While Chris Martin most likely gets the largest share, this averages to $23 million each.

The individual performer who, by far, earned the most in 2018 was Ed Sheeran at $110 million.  As a reminder, Sheeran came to the United States as a 21 year old kid on holiday and was playing coffee houses when Jamie Foxx saw him and helped Sheeran to become what he is today. How much of that $110 million is owed to Foxx and his team is unknown.  The same can be said for most of those on this list as it is very expensive to be so successful.

Close behind Sheeran is Bruno Mars at $100 million followed by Katy Perry at $83 million and Taylor Swift at $80 million.

Mr. Beyonce aka Jay-Z earned $77 million…which seems wrong as his much more talented wife, Beyonce Knowles earned 78 cents for every dollar that Jay-Z earned.  At minimum, I hope Jay-Z pays for dinner when they go out.

One of Coachella’s favorites, Roger Waters, is next at $68 million followed by Sean Puff Daddy P. Diddy Diddy Puff Love Combs at $64 million and another Coachella favorite, The Weekend at $57 million.

If we look at celebrities as a whole, Floyd Mayweather earned the most in 2018 at $285 million.  George Clooney is second on the list at $239 million due to the sale of Casamigos tequila brand that he co-founded and sold for $700 million.   Kylie Jenner is third at $167 million with a net worth of $1 billion at the age of 21.  Jenner makes this money because of 177 million social media followers who buy her cosmetic products.  Judge Judy Sheindlin is fourth at $147 million followed by Dwayne The Rock Johnson with $124 million.

While performers and celebrity get all of the headlines, very few make as much as America’s top corporate CEOs.  Bloomberg recently reported that the average salary for the top 132 CEOs in the United States is $12.4 million a year.  The Economic Policy Institute estimate that CEO pay is 312 times more than the average of their employees.

Haddon Libby is the Founder and Managing Partner at Winslow Drake Investment Management.   As a reminder, use a fiduciary advisor instead of a broker advisor in managing your stock and bond investments.  Why?  Fiduciaries must use a Fiduciary Standard of Care that put your interests first or a fiduciary can get in a lot of trouble as Wells Fargo recently proved.  Broker advisors meanwhile put their firm and themselves first and second meaning…caveat emptor…buyer beware.

Fiduciaries who make up only 6% of all advisors must disclose every penny that they and their firm earn while brokers do not.