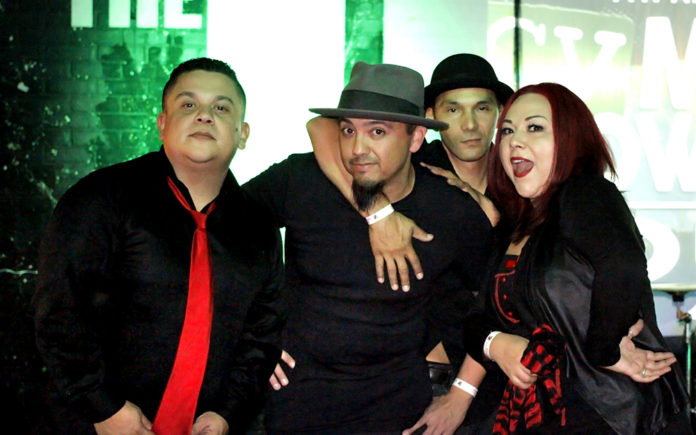 Last Sunday, Dec 1st, musicians and fans packed The Hood Bar and Pizza to experience the first, nail-biting round of competition leading up to the finals on May 4, 2019, where the winners will receive $2,000 cash, 4 hours studio time by Melrose Music, a photo shoot, and other prizes that will be announced soon.

No one in attendance, including myself, envied the tasks handed to the judges considering the quality of all 4 bands competing who were absolutely top-notch in both musicianship and performances. In the end, it was literally 1 to 2 points that separated the winners from the runners up.

The round 1 judges included singer/songwriter, Chelsea Sugarbritches, frontwoman for the bands 5th Town and Long Duk Dong. Ms. Sugarbritches has received multiple CV Music awards and nominations over the years including Best Frontwoman. Her bands, have also received many awards over the years.

The second judge was the lovely, Rebecca Luna. A long-time supporter of the local music scene, Ms. Luna was part of the original staff that launched KCOD radio in 2011. Crossing over from college to commercial radio in 2015, she works for Alpha Media in production and recording voice-overs for commercials that can be heard on multiple, local stations.

Rounding out the panel of experts for the evening was David Williams, owner of Melrose Music Studios in both Hollywood and Palm Springs. A long-time producer, audio engineer and musician, over the years Williams has built up an impressive list of clients including, The Pointer Sisters, Taylor Dayne, Jodeci, Clay Aiken and many more including many up and coming artists from all spectrums of music.

Taking first place in the 1st, preliminary round and winners of $200.00 cash was Empty Seat!

Fronted by a dynamic singer/songwriter who is as sassy as she is talented, Erin Ferrer, AKA, “Red,” dazzled the audience and judges alike with her beautiful yet powerful vocals and dynamic interaction with her bandmates and the crowd. Although relatively new to the Coachella Valley, Empty Seat has been together as a band in one form or another since around 2002 and it shows not only through the quality of musicianship, but the sheer cohesiveness they display as a band, unit. Originally based in LA County, 2 of the band members transplanted to the desert while the other 2 are spread out between LA and Hesperia, their obvious dedication to their project is now reaping the rewards of their growing recognition as a force to be reckoned with on our beloved local music scene. Empty Seat has hit the ground running and I for one can’t wait to watch them take the valley by storm. www.facebook.com/EmptySeatband

The first competitors to take the stage are a group of guys who have been experiencing a bit of a snowball effect of local recognition in just the past year and have quickly found themselves becoming a staple act on the Coachella Valley music scene. That says a lot considering the fact that the band consists of members ranging between the ages of 17 to 19. I’m sure they probably get annoyed by people constantly bringing up their ages but, the fact of the matter is that their ages are indeed a factor in what makes them so impressive. Their sound is both original and unique. I can’t really think of many other bands to compare them to and I have yet to ask them what genre or subgenre, if any, they think they fall into. That being said, if I personally went out on a limb to describe their sound I would say it is sort of like…psychedelic punk? In addition to their unique vibe, the judges and audience were impressed by their instrumentally driven songs and their habit of switching vocals from member to member throughout their set which is fun to watch. Although Frank Eats The Floor didn’t come out on top this time, they are clearly not going anywhere, anytime soon. www.facebook.com/FrankEatsTheFloor

This is not Do’s first rodeo, nor will it be his last. The last time he competed in this competition he ended within one point of taking first in his round and that was without a band. This time he showed up packing heat and ready to rumble with his secret weapons in the form of his drummer Erik Mouness and the multi-instrumentalist wonder herself, Bri Cherry, who played double duty on both bass and violin. Accompanying himself on keys, Do, literally captivated the audience with his vocals that are as swoony as they are powerful. With dreamy lyrics and looks to match, Krystofer Do has that, “It” factor that makes him seem destined for pop-stardom and I wouldn’t be the least bit surprised to see him packing in crowds of screaming girls sometime in the not-too-distant future.

Maybe better known by their full name, The Classy Motherf***ers, this 3-piece is on the short list of favorite local bands of pretty much every performer in the valley who has had the pleasure to experience them live. These guys are super young but have always impressed me with their well-seasoned sound that comes across as though they have been doing this for decades. This night of competition was no different than any other CMF show. They brought the funk and brought it hard. Although they are a very instrumentally driven group that thrives on strong, bluesy bass lines and epic guitar solos…the fact that their frontman, Joseph Vaughan is carrying around one of the best set of pipes of any male vocalists in the desert is another part of what makes these guys truly fantastic. They bring a youthful vibe to a classic sound and with talent like theirs they will likely be around for a long time.

Upcoming Showcase preliminaries will be held at The Hood Bar & Pizza on:

January 13, 2019: Cody White & The Easy Ride/Giselle Woo & The Night Owls/Cakes & The Assholes/Reborn By the Sunshine