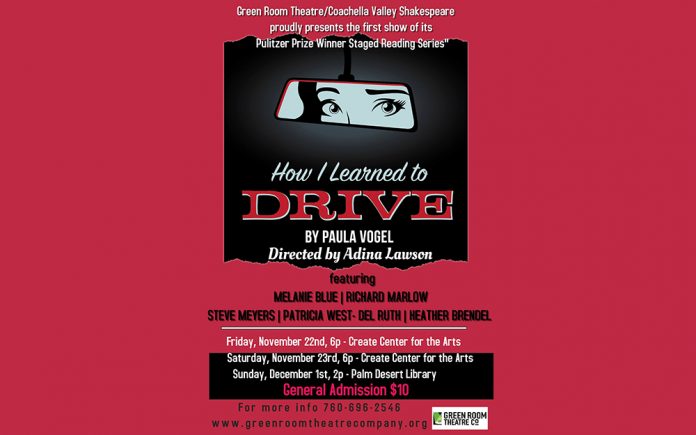 One known common wisdom in the theatrical world is that theatre is most certainly a collaborative art.  The performance an audience sees when the curtain rises is the culmination of many layers of dedicated artists.  A playwright sometimes spends years writing and rewriting a script in order to ready it for a production.  The script is then entrusted to a theatre company who agrees to produce and goes about bringing in a Director who will read the script and then set about casting and bringing the words on the page to life on the stage.  The actors will spend endless hours memorizing dialogue, rehearsing stage direction and breathing life into characters.  Then it is finally put into the hands of an audience with the hope that their collaborative efforts will be appreciated.

In 1998 Paula Vogel won the Pulitzer Prize for her play, “How I learned to Drive.” A dramatic and moving telling of a story about a teen girl called L’il Bit, and her incestuous sexual relationship with her Uncle Peck.  The relationship began when L’il Bit was a pre-adolescent child and continues until she starts college, when she finally finds the courage to break it off.  Vogel uses driving lessons as a metaphor for the progression of the relationship, and in the mix of this dark topic, she weaves humor and some tenderness, as she tells the tale of pedophilia, incest and how women and girls are sometimes viewed.

The Green Room Theatre, founded by Karen Lin and David Catanzarite, produces this series of Pulitzer Prize winning Staged Reading series and continues with their mission to bring quality theatre and education to adults and youth in the Coachella Valley with the staging of this Pulitzer Prize winning script.  Bravo to this hard-working group of theatre professionals.

How I learned to Drive, is truly a brilliantly written script, and when mega talented director, Adina Lawson sprinkles her magic into the presentation, it’s sure to make an impact.  Best known for her incredible acting performances on various states around the desert, Lawson puts on her Director’s hat for this staged reading.   Melanie Blue as L’il Bit, and Richard Marlow as Uncle Peck, are two well established actors in the Coachella Valley. You can bet that any show featuring their talent is going to be mesmerizing.  Steve Meyers, Patricia West-Del Ruth and Heather Brendal round out this wonderful cast.

Performances of “How I learned to Drive,” were presented on Friday November 22 and Saturday November 23.  The final performance can be seen on Sunday, December 1, at 2pm.  The Palm Desert Library, 73300 Fred Waring Drive, Palm Desert, COD.