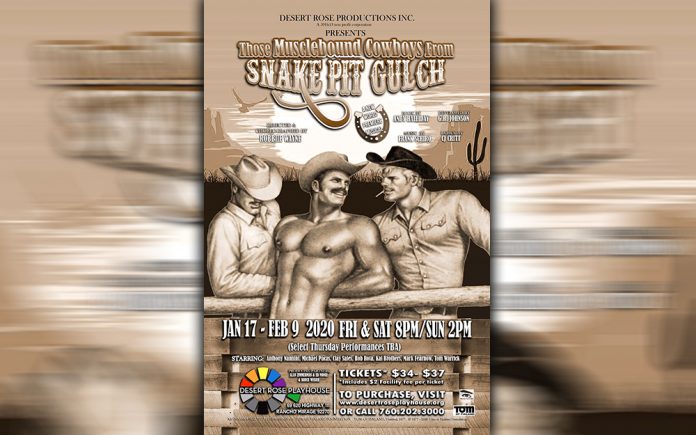 Author, Margaret Wolfe Hungerford, is credited with first writing the famous idiom, “Beauty is in the eye of the beholder.”  It’s a quote from her book, Molly Bawn (1878).

It is such a commonly used expression that it requires little explanation.  We all have our own unique interests and attractions.  The same can definitely be held true when it comes to theatrical productions.  Just about any playwright will tell you that their work is not going to capture the interest of all theatre goers. There is usually a target audience for most shows.  It’s what makes theatre so diverse and rich.

I will be honest in saying that I am not usually the biggest fan of camp shows that are obviously targeted towards a gay male audience.  So when I accepted the offer to review the current Desert Rose Playhouse production of, “Those Musclebound Cowboys from Snake Pit Gulch,” I had a few doubts that it was a show which would capture my attention.  I was thrilled and pleasantly surprised to find that this show was so much fun and I had a great time.  Like most productions happening at the Desert Rose Playhouse these days, Robbie Wayne knows how to bring a touch of class and quality to any show he produces.

“Those Musclebound Cowboys from Snake Pit Gulch,” a very campy musical, is written by a team of creative types.  CJ Critt (Lyricist), Andy Halliday (Book), G.R. Johnson (Development), and Frank Schiro (music).  I won’t pretend to say it’s the best written script I’ve ever seen.  It’s not.   This was a world premiere and I am somewhat curious to see what it actually looks like on the page. A few more rewrites maybe should have been involved in the process.  But under the skilled direction of Robbie Wayne, this show took on a life of its own and was so entertaining, that I would dare a member of any demographic not to burst out into laughter a time or two.  Wayne’s choreography was the absolute cherry on this delightful cake.

It’s 1849 and the gold rush is in its heyday.  But in the town of Snake Pit Gulch, the sheriff’s been murdered and claims are being jumped.  New York Pinkerton Detective, Stanley Whimple is on the case.  Disguised as Femme Fatale Daisy LaFleur, the detective heads out to this western town where there are no women and most of the men are ok with that.  Anthony Nannini, as Daisy Lefleur is a performance that you really do not want to miss.  Nannini, is absolutely wonderful. Funny as hell, and just a downright pleasure to watch.  Daisy Lefleur, is a woman to be rekoned with and Nannini’s inspired performance, makes her one to be remembered.

Big Jack Slade (Michael Pacas) is the menace that has taken over Snake Pit with his cheating, gambling, hot coffee in the groin and lots of claim jumping. Every story needs a bad guy to stir up conflict and Pacas is perfect in the role.

When Brothers Even (Clay Sales) and Sam (Kai Brothers,) get to town, they find that Slade has stolen their claim, so they team up with the new Sheriff, Wheezy, (Tom Warrick,) who hasn’t experienced sobriety in a long while, to get their claim back. Topeka, (Rob Rota,) is the Slade’s pretty boy toy who performs and keeps the men entertained.  But when Topeka falls for Sam, it’s a game changer and Big Jack ends up on the losing end of that hand. It’s easy to tell that this talented ensemble is having a lot of fun and they make sure that the audience is with them every step of the way.

Michael Mclean’s wild west scene design is beautiful.  I love a well-crafted set and this one does not disappoint.  I admit that I sometimes fail to give appropriate credit to talented lighting designers, so let me fully acknowledge Phil Murphy’s lighting for this show.  I loved it.  I was captivated by the realistic beams of sunlight shining in the blue sky behind the saloon doors. Jaci Davis’ musical direction was spot on for this production.  Music creates the atmosphere and Davis does a wonderful job of providing the right mood for this show.

“Those Musclebound Cowboys from Snake Pit Gulch,” is recommended for adults and is running through February 9th, at The Desert Rose Playhouse located at 69-620 Hwy 111, Rancho Mirage, CA 92270.