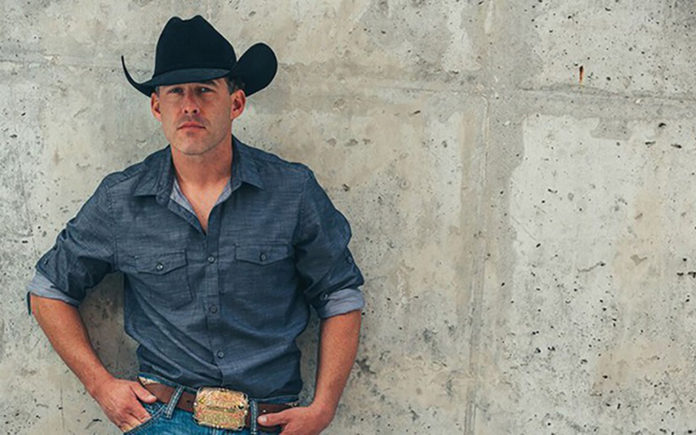 Aaron Watson is cut from sturdy cloth and hand sewn.  He’s not one of a million out of a factory – he is his own real deal, and after 18 years, has earned his place on the Mane Stage Sunday night, just hours ahead of Garth Brooks. “It doesn’t really matter whether I’m playing a dancehall in Texas or a stadium tour around the world, I’m just me,” he says. “I won’t change. I’m just too rooted in what I believe in. When you’ve played for such a long time to nobody, now that there’s somebody, you really don’t take that for granted.”

Watson has recorded several independent albums in his career. Watson was sitting at his kitchen table in 2015, as his wife Kim was scrambling eggs when he got the call – The Underdog had debuted at No. 1 on the Billboard Country Albums Chart. It was the first time an independent, male country artist had ever outsold majors to premiere at the top spot. “We started jumping around and squealing like kids,” he says. “It was a beautiful moment because I got to share it with the girl who believed in me when I was broke and playing some pawnshop guitar. It is something I’ll never forget…Once we dried the tears of joy, it hit me,” Watson says. “I had my work cut out for me for my next album.” In 2017, Watson had his first major radio airplay hit with “Outta Style,” which reached top 20 on Country Airplay.

Watson’s latest, Vaquero, is the follow-up to 2015’s The Underdog. In it are songs that play like an old vaquero delivering timeless wisdom. There is also a song he feels is possibly the best song he’s ever written: “They Don’t Make Them Like They Used To.”  In the spirit of Haggards “Are the Good Times Really Over for Good,” the song takes you on a unique journey from a sentimental moment to a thoughtful and insightful rant about our times.  It is neither a left of right point of view; it is simply a human observation. In my opinion, as long as there are guys like Aaron Watson, there is evidence that yes, they do still make them like they used to. Like his forefathers in country music, he builds on his roots, but no one will tell him how to do it. It’s not an easy position to hold in these music times, but if Haggard, Waylon and Cash were outlaws, then so is Watson.

CVW: “Since becoming and 18-year overnight success, would you mind sharing with me what has been the absolute most heartbreaking part of the music industry (or at least the toughest to push through)?”

Watson: “I think every job or dream has it’s struggles and disappointments, but honestly, if there’s something I’ve learned through my 18-year journey is that it’s just that – the journey.  I’ve learned not to get too focused on a certain milestone or disappointment.  I’ll tell you a quick story. When I was young in my career, I got an opportunity to go to Nashville and sing some songs for a big record executive.  I thought he was going to think I was the greatest thing since sliced bread.  To make a long story short, that’s not exactly how it went, so I went back home to Amarillo, Texas. I was having coffee with my dad telling him about it and basically how this guy said I wasn’t good enough.  My dad took a sip of coffee and said, ‘Don’t worry, that’s the same thing they said to Willie for all those years.’ There I was thinking, ‘Yeah, me and Willie!’  Then my dad says, ‘You know Willie finally made it by the time he was 45 years old.’ I’m about 20 at the time and I asked him, ‘Am I really going to have to grind it out for 25 years to make it?’  He just sipped his coffee and grinned and said, ‘Yep, if you want it bad enough.’  That changed my entire outlook.  It’s about the passion and grind, and I love what I do so I just focus on working hard on the things that I can control.”

CVW: “Want to brag on your wife a bit?  As an artist myself, I know how hard it is for significant others to remotely understand the demands and the drive.  Some tolerate it. Some don’t.  And some are with you in spirit every step of the way, the latter being the rarest.”

Watson: “My wife is wonderful, a true blessing.  We’ve been married almost 15 years, have three wonderful kids and another one up in Heaven.  She’s just been so supportive whether we were starting out scratching to get by and I was in a white van, or now when things are a bit more comfortable.  It’s important to have a home and that support system to rely on because it’s certainly not an easy or normal life and career.”

CVW: “Did you ever seriously consider hanging it up?

Watson: “You know, not really.  I’ve always had a passion for making music, writing songs, singing.  It’s what I’ve dedicated my life to. About 7 years ago my wife and I lost a little girl, Julie Grace, and I went through a tough period.  It was hard to go out on the road and perform to people wanting to have fun when I was homesick and heartbroke. But at the same time, daddy’s got to make a living and this is what I do.  I have three wonderful healthy babies at home, and on the road I have an amazing band and crew that have been with me forever.  Everyone I’m surrounded with really helped me through that period.”

CVW:  “What are your favorite venues to play, since you’ve pretty much played them all?”

Watson:  “Oh yeah, definitely seen a lot over about 2,500 shows.  So many are great for so many reasons.  The legendary venues…Billy Bob’s, Gruene Hall, Cain’s Ballroom in Tulsa, Grizzly Rose, Buck Owen’s Crystal Palace just because of everyone that has played those.  Getting to do the big rodeos like Houston, San Antonio, Cheyenne, Calgary (just to name a few) were definitely bucket list performances.  I’ve gotten the opportunity this year to step up to some larger arena shows, playing both where I grew up in Amarillo just last weekend and Abilene where I live now.  The Pacific Northwest recently has just exploded, and I love the folks up there. The UK and Europe is always fun.  I don’t know, I could go on and on.  I really enjoy going all over playing our brand of country music and every performance is special and unique.”

Watson: “Honestly, I feel like I’m living the dream now. I get to do what I love for a living, making a good living while doing it, providing for my family and taking care of my guys.  Of course I’d love to be home more and coach some more baseball and see some more ballet.  I’m ambitious and definitely want to keep growing, but I’m not particularly reaching for that brass ring or thinking there’s a finish line.”

CVW:  “Any words of advice for the earnest fledgling singer/songwriters out there throwing themselves on the sword for a music career?”

Watson: “I meet a lot of them; it’s been really special that they find some inspiration in my journey. I just tell them, ‘Believe in yourself and work hard.”  There’s no secret trick – you just got to hustle and get better.  Believe in yourself, write all the time, know who you are, go out and find your own audience.”