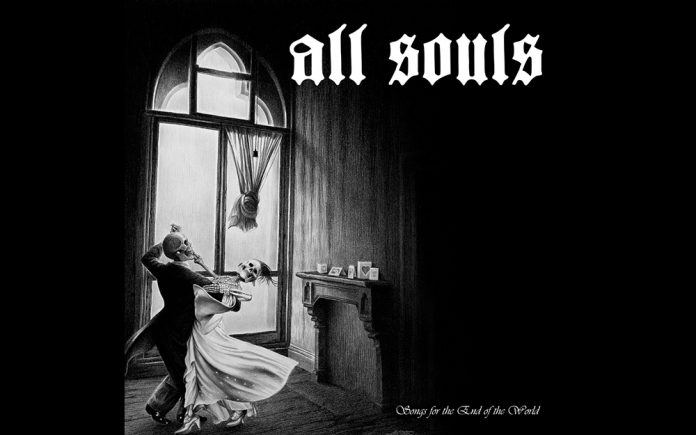 SONGS FOR THE END OF THE WORLD ALBUM REVIEW

Rock band ALL SOULS have toured clubs, theaters and arenas with the likes of Red Fang, The Sword, Kvelertak, and Torche. What seems like eons ago, in 2019, a band highlight was their opening slot on the TOOL tour. Prior to that stint they had been working on their second full-length album Songs for the End of the World. Their 2018 debut self-titled album remains on playlists of thousands of Rock fans, including this writer. Once again joining forces with prodigious producer and madman genius Toshi Kasai (TOOL, The Melvins, Foo Fighters) at Sound of Sirens Studio in Los Angeles, ALL SOULS is prepared to release their newest batch of songs that kicks 2020 in the balls and sticks a big middle finger in the face of COVID-19. 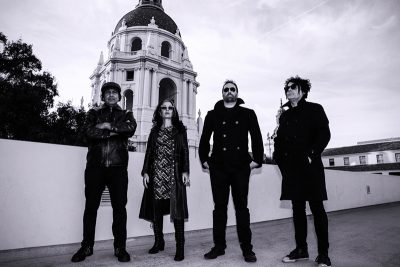 The first single from Songs for the End of the World, ‘You Just Can’t Win’ is available on all platforms. The official video for the song was directed by Chilean artist Marcos Sánchez (The Breeders) with animation by Sánchez and Simón Jarpa. Footage was provided by the Prelinger Archives, a collection of films relating to United States cultural history, the evolution of the American landscape, everyday life and social history. The video can be viewed on ALL SOULS’ YouTube channel.

Subsequent singles include ‘Twilight Times’, ‘Winds’ and ‘Death Becomes Us’ which are available now for purchase and streaming on all major platforms. The track ‘Coming With Clouds’ was recently premiered and streamed on Heavy Music support site The Obelisk. The entire album will be released worldwide on October 2, 2020, and will be available digitally, on CD and on vinyl in two different bundles. Album artwork by Laurie Lipton is fitting, poignant and no doubt will be invaluable to ALL SOULS fans and vinyl collectors. In conjunction with the album release, the video for ’Winds’ will also be premiered.

CV Weekly asked Castellanos about the album in 2019. “It sounds like ALL SOULS. It has a depth, and a darkness to it, but there is an inescapable pop element that we are always drawn to because we love hooks!”

This is the Coachella Valley Weekly album review for Songs for the End of the World.

Just what I expected as an opener. Impressionable rock with the ALL SOULS reiteration. Having seen them perform live several times, this song will fit nicely into the set list as a show opener with its fast tempo, drum intro and accentuated guitar. I’ve always delighted in the ‘clap and snare’ combo, it gives a song that atmosphere of participation. This is the new ‘Arena Rock’…what a way to open the new album.

That melancholic guitar intro holds me spellbound. Another headlong and uptempo tune. A nostalgic sound with a newfangled feel. The Rock song to listen to as the sun sets and you gear up for good times. The first two songs remind me why All Souls are a band that traverse all Rock species and protrude from the rest.

A heroic poem…Tornay’s snare and bass drum work tempers the song…almost military-esque in nature. The song is wafting with passion from each performer; Aguilar’s haunting vocals, Castellano’s persistent bass work, Trammell’s shredding and Tornay’s ebb and flow produce a sonic blast of emotion. The song clocks in at 7:14 and provides as much affectivity as it does music. It’s reminiscent of YES, DREAM THEATER and TOOL respectively with a multitude of temperaments within the track. The song is best heard live in a 15,000+ arena.

Another bravado of a song…the musical swagger and lyrical murkiness drive the song. I have the impression that this could have been on their first self-titled album. It expresses the connectivity between albums and that the ALL SOULS loudness is indeed an identifiable sound.

Ominous lyrics abound…Castellanos’ bass lines should be canonized. The distinct sonic wall of guitars Aguilar and Trammell set forth are unrelated to any present day duo that comes to mind. In defiance of the playful chord progression, the song seems to tell us that the end comes for us all, but in that finality, you become a part of the whole. “Say your goodbyes”.

The first single…includes a cutting edge video with time-honored footage with strategic animation by Marcos Sánchez. The song and video appear to represent our infuriation from the suffering of negative consequences brought on by an unjust society. The looming guitars of Trammell and the near-wrathful vocals of Aguilar communicate the dissatisfaction. On the top of my list of repeatable songs on SFTEOTW.

I dig the choppy guitar intro along with the pulsating groove and tempo. No doubt talking about the demise of those who seek absolute sovereignty…bye bye Mr. Trump!

Aguilar is an ardent narrator and earnest storyteller. The song implies a translation of a story about the bitter end and demise of an ill-fated man. The lyrical theme and music align well…“The changing winds…it’s coming down for us, it’s time to…hide”.

Even as a metaphor, it seems impossible…“If I could only make you happy, maybe the sun would shine on me”. That unhealthy confidence is fleeting and leads to loss of self. I’m appreciative of how All Souls share the recesses of their hearts with us while creating resounding music. The song’s composition compliments the text. The last minute of build up and instrumentation provokes a frenzy of fervor for me.

Epic ‘word to the wise’ finale…the impending approach of danger. “The time is finally at hand…it’s coming with clouds, turn away”. A fitting, effective and revelatory end to the album.

The album is quintessential ALL SOULS. When the band are able to take this album to the masses, they will have two albums of material to choose from and intermingle the songs to a fulll headlining set. ALL SOULS have refined a technique of incorporating the listener’s sensitivity while evoking suggestive points of view. You feel what you hear, both at their behest and yours. When it comes to the band’s chemistry, Tornay says it best, “We write music as it comes to us. It isn’t so much about thinking, it’s a lot more about doing.” What you should do is purchase or download this album in its entirety on October 2nd.