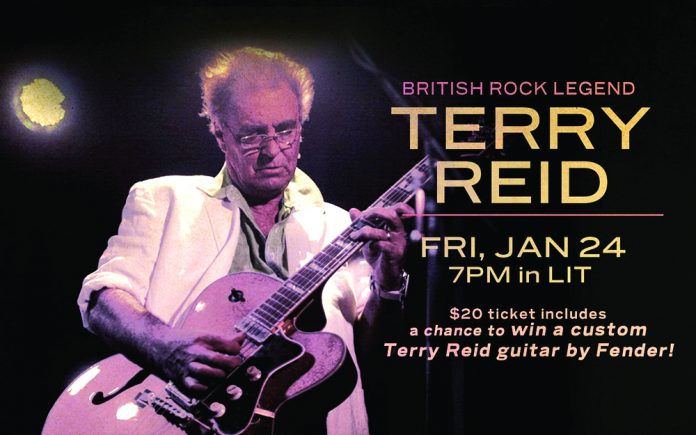 Now the British Blues-Rock legend is performing a special, intimate show with Phil Jones on drums (former drummer for Tom Petty), Jim Wilson on bass, and Robert Davis on guitar at LIT nightclub at Fantasy Springs Resort Casino on Friday, January 24th at 7 p.m. Tickets ($20) are available at the Fantasy Springs Box Office, via phone (800) 827-2946 and at www.FantasySpringsResort.com.

Attendees will have the chance to win a custom Fender Telecaster guitar from Terry Reid’s personal collection.

Born in Huntingdon, England in 1949, Reid’s first brush with fame came as a member of Peter Jay and the Jaywalkers, who toured the UK with the Beatles, Rolling Stones, and Ike & Tina Turner during the mid-’60s. While still a teenager, Reid caught the ear of producer Mickie Most, best known for his work with the Animals, Herman’s Hermits, Jeff Beck and Donovan. Reid’s debut solo album, Bang Bang, You’re Terry Reid, featured five original songs including “Without Expression,” and “Tinker Taylor.”

Also taking notice of Reid’s talents was guitarist Jimmy Page, who was looking to form a new group after the demise of the Yardbirds. In what has to be one of the most fateful job references in rock history, Reid suggested a young Birmingham vocalist named Robert Plant and drummer John Bonham. The rest, as they say, is history.

Reid was then tapped by Mick Jagger and Keith Richards to open for the Rolling Stones on the group’s 1969 tour of America.

Over the next decade Reid concentrated on his solo output, highlighted by 1976’s Seed of Memory, which was produced by longtime friend and collaborator Graham Nash. Reid also became a sought-after session man, appearing on albums by Don Henley, Bonnie Raitt and Jackson Browne.

In 2003, Rob Zombie used three of Reid’s songs in his cult horror flick The Devil’s Rejects, including “Faith to Arise,” “Seed of Memory” and “Brave Awakening.”

Meanwhile, the Raconteurs featuring Jack White recorded a version of Reid’s “Rich Kid Blues” for their second album Consolers of the Lonely.

Today, Reid is acknowledged by his peers as one of the outstanding voices of his generation.

CV Weekly spoke with Reid as he partied it up with Johnny Depp and Joshua Homme at the NAMM Show.

CVW: I know you were going to spend a lot of time at NAMM Show this weekend. How did it go?

Reid: “It was great. Everybody is really good to me. I work with Dixon there and D’Angelico and a bunch of different companies. Gibson was really good too. Danelectro as well. I sat with Seymour Duncan for a while, he’s great. I do this walk-around and touch base with people, grabbed a few things and see if I can get out of there. We got out of NAMM by 6 pm. It’s such a long day. It starts at 11 am and ends at 5. I look around and everybody’s yawning, it’s not just me. It’s a lot of work. This year they did something different. They carpeted a lot of the floors. The walk between the booths and things didn’t seem as bad on your feet as it has been other years. Everybody moaned about that.”

CVW: There’s so much that revolves around the NAMM Show. What else did you partake in?

Reid: “I went to a big charity ball after NAMM that Johnny Depp does, so that was great. I had been there a couple times before and performed with Joe Perry and Hollywood Vampires. Also, this year, I met up with Pat Foley, who was at Gibson, Scotty Moore, who played and supplied Elvis with guitars, it’s too cool. If you want to talk to a guy with stories, Pat is a genius and he works at Orange Amplifiers now. Clifford Cooper, who owns Orange, I’ve known him since my time in England when I was 14 or 15. He remembers me standing outside in the cold looking at the famous Stratocaster in the store that he had, steaming up the windows.”

CVW: You’re from the UK. Where exactly did you grow up? Any cool stories?

Reid: “I’m originally from the countryside. It’s out near Cambridge which is 80 miles north of London. The first time I went to Birmingham, my dad was a car dealer, so he’d travel around to auctions to look for deals and one time me and a friend of mine who was in a group that we had in school and was in a group called Spencer Davis Group and they had this real smooth sound and we are at this big pub while it was raining and there was this spotty-faced young kid on piano singing Ray Charles’ “Georgia On My Mind,” my jaw dropped and I said ‘I’m gonna quit, I don’t think this business is right for me.’ This kid, he just staggered me. It’s so funny because, humbly, later on, I got to tell him that story. The kid was Steve Winwood. And I got to know those guys so well. He said ‘get out of here,’ I said ‘no, we all quit the business to come see you,’ he’s so good, Steve’s a real one.”

CVW: Tell us about your upcoming show at Lit at Fantasy Springs.

Reid: “It’s great. Everybody has been real good to me over there. It will be a real trip, the band from Los Angeles, we’ve known each other for a long time, Phil Jones, Robert Davis and Jim Wilson and then we’ve got two pedal steel players so it works sort of like an orchestra. It’s not like just 100 pedal steel solos, it’s not like that, they’re playing harmony together on top of things. It gets really interesting; it’s not just Country. Pedal steel has moved into a lot of areas, it doesn’t have to just be that technique. It’s just like using strings. The two guys who are playing have known each other for 40 years! There ya go! We’ve played together quite a bit. Keep your fingers crossed, it should really be interesting.”

CVW: Can you describe what it’s like for fans who attend your live shows?

Reid: “I don’t know, I’m on stage! Wrong guy to ask! Haha! I never was big on that running around with your guitar in the audience. Knowing me I’d sit and talk to somebody and never get back up again!”

CVW: What is next for Terry Reid?

Reid: “We may be returning to play Glastonbury 2020. I did the first one in 1970. I was gonna get an old wig and a walker and walk out like Little Richard and then pop up as Terry Reid!”

CVW: We are lucky to have such a Rock icon residing in our own backyard. I, for one, am thankful for you and the fact that you call my home, your home. You are easy-going and a joy to talk to. I’ve spoken to many friends in and out of the music business who enjoy your in-between song banter as much as your performance.

Reid: “It’s very kind of you to say that. It’s a blessing to live here. The truth is always funnier than fiction. You can make stories up and things but over the years that I’ve done it, it’s the funny things that happen to us that make the most memories. It’s about not taking it all too seriously. Ultimately, I want to sing and there are so many songs I wanna play!”