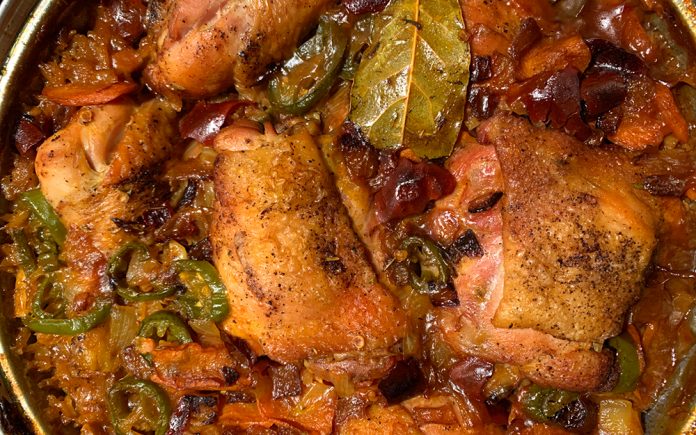 You don’t have to roll your R’s when you say arroz con pollo borracho, just like you don’t have to brush your teeth twice a day, or wear a seatbelt when your drive. I’m not here to be the boss of you and tell you that you can’t wear your underwear two days in row simply by turning it inside out (but that is a pro-tip for those times you missed laundry day). All you have to do to make authentic arroz con pollo is to use whatever ingredients you have on hand. If you have no ingredients on hand yet still feel like you need this recipe in your life, fret not because that’s what Post Mates is for. Chicken and rice is a humble dish that has been around for centuries, crosses cultural divides, and doesn’t look to be going anywhere, anytime soon. 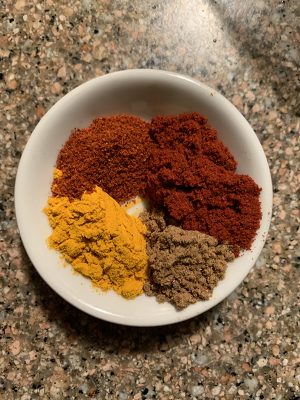 Some sources claim that this dish originated in the 16th century East Indies at a time when the Spanish Empire had conquered Maritime Southeast Asia. Other scholarly sources refute this claim, stating that the origin of arroz con pollo goes back to the 8th century when the Moors (medieval name for Arabs, North Africans, and Muslim Europeans) occupied Spain and influenced many aspects of early Spanish culture, cooking included. Many spices unique to Africa were introduced to Spanish cuisine, including saffron, cumin and coriander; all ingredients used in different iterations of arroz con pollo. The Spanish then brought their culture to Southeast Asia 800 years later, where dishes like Chicken Biryani, Hainanese Chicken Rice, and Claypot Chicken Rice all stemmed from Spain’s arroz con pollo.

This wouldn’t be a Brewtality recipe if it didn’t include beer, and the beer used in this dish is none other than a Vienna lager; more specifically, the north-American twist on the Vienna lager, the Mexican lager. With light hopping, clean flavors and a crisp finish, this is a beer that will not add substantial bitterness when cooked, but rather notes of malt and corn that marry nicely to cooked rice and vegetables. A craft version is always recommended, as they contain less fillers and are generally better than their mass-marketed counterparts. 21st Amendment’s El Sully, or Saint Archer’s Mexican Lager are both available at select grocery stores in your area (I used the Mexican lager that I created for Brewcaipa, Mesa Grande).  Modelo or Tecate will substitute in a pinch.

Spices: 1 tsp smoked paprika, ½ tsp cumin, ½ tsp turmeric, ¼ tsp cayenne, 1 bay leaf. EDIT: Saffron is traditionally used in arroz con pollo but I didn’t feel like mortgaging my house to buy some. If you do use saffron, ¼ tsp will do for this recipe, use instead of cumin and turmeric.

Preheat your oven to 375 degrees Fahrenheit.

Place a large, deep, heavy skillet over medium heat. Add the vegetable oil. Right when the oil begins to smoke, add the seasoned chicken pieces and cook until browned, flipping to cook all sides, about 10-12minutes cooking time.

Remove the chicken and set aside, reduce heat to medium-low and add vegetables to the pan.

Sautee for 3 minutes, then add the rice. We want to toast the rice until it’s a light gold color. 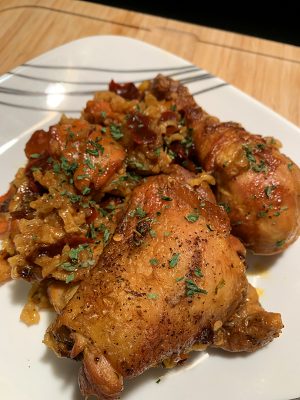 Now, add all of your spices to the pan. We want to wake up the flavors by dry cooking them with the vegetables (omit peas if you choose to use them, they will be added before serving) and rice for 2-3 minutes before adding your liquids. Add the cream of chicken soup and beer to the pan, stirring to blend all ingredients.

Add your chicken back to the skillet, and bring to a simmer.

Cover the pan and place in the oven, bake for 30 minutes. Remove the pan from the oven (stir peas in rice now if using them), top with parsley or cilantro, and serve.