For over 36 years BB Ingle has notably presented some of the biggest and best celebrations in the Coachella Valley. Through his events, he’s supported numerous charities and organizations like Pet Rescue Center, Inland Empire Ronald McDonald House, Girlfriend Factor, FIND Food Bank, Boys & Girls Club of Coachella Valley, and American Outreach Foundation and leaves a path of partying everywhere he goes. As he courageously faces his second battle against cancer, it’s time for us to champion for him and keep the party going! All proceeds from the 36th Annual St. Patrick’s Reunion Party at Big Rock Pub this Saturday, March 14th, will go towards supporting BB’s medical expenses. Festivities will begin at 6 p.m. with live music from Manuel the Band starting at 8 p.m. and Long Duk Dong starting at 10 p.m. Seating is first come, first seated with no reservations. Pre-sale tickets are $10 and are available at tickets.thebigrockpub.com ($15 at the door). 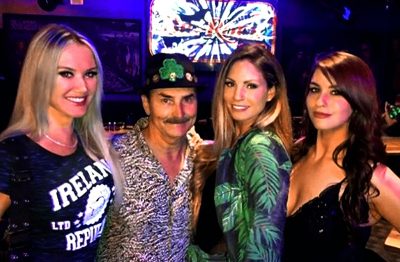 There will be a costume contest, games, prizes and all kinds of shenanigans as well as some of the best live music in Southern California to dance a jig to. Come dressed in Irish garb and the luckiest leprechaun will win ye lucky charms. Eat some corned beef and cabbage, have a green beer or whiskey and enjoy the luck of the Irish, because on this day, everyone is green! “Catch hold of the leprechaun BB and don’t let go, for he will tell you the address of the gold that is unknown.”

Earlier this year, many of BB’s friends and supporters sponsored a petition for a star on the Walk of the Stars Palm Springs and it was approved almost instantaneously. BB’s ceremony is scheduled for Friday, May 8, 2020, at 5:30 p.m. and is the Walk of the Stars’ 2019/20 Season Finale! BB’s will be the 443rd star dedication and will be held at 101 N. Palm Canyon Drive. Immediately following the ceremony, there will be a big block party to celebrate the occasion featuring live music and DJs.

By his own account, the 2019 recipient of the Lifetime Achievement Award at the CVMAs is not done…by a long shot. He recently brought the house down as he sang his signature “Sweet Home Alabama” with the ultimate backing band Sixwire at The Warburton Soirée last weekend at JW Marriott in Palm Desert, California.

CV Weekly spoke with BB about his 36th year hosting the event. He shared his enthusiasm, “I’m excited! If I can keep the tradition going, I will. We decided to call it a reunion party instead of pre-St. Patrick’s Day party because it made more sense after all these years. I’m fired up about the bands, seeing everybody and keeping the party going!”

BB has received several rounds of chemo and has undoubtedly had to turn to his faith to cope with the daily struggle. Along with his faith is the support of family and friends. He shared, “With regard to my illness, people have been pretty upfront with their support. I really appreciate everybody’s blessings and prayers, it seems it’s been helping, I’ve been feeling a lot better lately. I really didn’t expect the level of encouragement I’ve received. I’ve developed a ‘live like you’re dying’ attitude. You must live your life to the fullest as much as possible.” Even before his illness, BB repeatedly encouraged others to be their best. 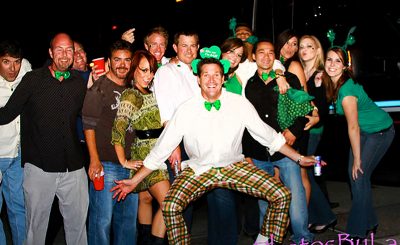 BB has inspired all of us to not sweat the small stuff and realize that despite any circumstances, how we choose to be is ultimately what determines how we live. On a personal note, BB has given me the opportunity to look at myself and regardless of the conditions of my environment or the status of my inner self, I am worthy of reaching my full potential.

BB remains grateful and humble. “I want to extend a special thanks to all those of you out there that have supported the parties over the years; for encouraging me now and allowing me to live my dream and to be your go-to party guy!”

In these uncertain times, one thing is foreseeable, BB plans to continue to fight the good fight and provide the party as long as his supporters continue to show up. The least we can do is be present. Thank you BB!

Long Duk Dong, the ‘Best Cover Band’ for six out of seven years at the Coachella Valley Music Awards, will be getting you into the groove all night long or at least after Manuel the Band takes the stage. Rad members Nicco Ysiano (vocals), Chelsea Sugarbritches (vocals) and Jeff Mazur (keyboards, background vocals), Chris Koenig (keyboards, Keytar), Dub Wallace (bass, vocals & background vocals), Troy Whitford (drums), Eric Willman (guitar) and Martin Barrera (guitar) are best known as ‘The Best 80’s Cover Band This Side of the Dinosaurs’.

The band’s line-up consists of Manuel Grajeda on vocals and guitar, Brandon Charles Worth on drums, George Madrid on pedal steel, Richard Fernandez on trombone and percussion, Matt Kalin on saxophone and Kevin Nowacki on bass.

Their newest album, Room For Complication, is out now and includes the first single, the dynamic tune “Breathe.” Manuel The Band has made an impression on the Southern California music scene with a unique sound stemming from influences such as John Mayer, Dave Matthews Band and Young the Giant.

The band shared their enthusiasm for BB’s party, “We’re very excited to be back in the desert and share our sound. We always love playing out there so to be able to play in this sort of capacity is a real privilege that we’ve been really looking forward to!”

To learn more about BB go to:

For tickets to the event, go to: