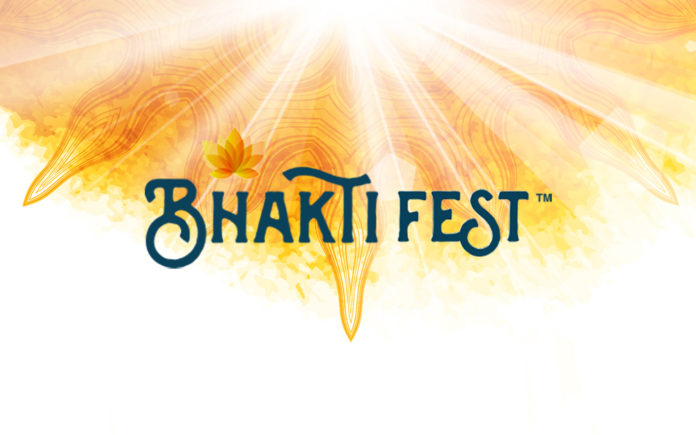 Upon exiting the stage at 1969’s Woodstock Festival where Sri Swami Satchidananda gave the event’s invocation to over 400,000 attendees, the renowned spiritual leader gave Sridhar Silberfein his mission to create a festival where the focus was chanting the names of the divine and bringing higher consciousness to the masses. Forty years later in 2009 Sridhar actualized his mission, and in 2018 we are thrilled to celebrate 10 years of Bhakti Fest, September 12 – 17.

Pulling out all the stops for their 10th Annual Bhakti Fest event, attendees will be treated to a keynote speech from the world-renowned mindfulness leader, Dr. Deepak Chopra M.D., co-founder JIYO.com, in his yoga festival debut. Dr. Chopra will also lead a workshop on The Radiance Sutras, in conjunction with Dr. Lorin Roche; take part in the Spiritual Superstar panel featuring Jai Uttal, Shiva Rea and Prem Baba; and lead a Global Meditation with Grammy nominated artist Krishna Das.

While long known as a Kirtan (chanting) music festival, Bhakti Fest has branched out into Sacred Music in recent years, and for the 10th edition, are pleased to host the festival debut of Radnor & Lee. This new duo features television superstar Josh Radnor, the titular “I” in the Emmy winning nine season hit show “How I Met Your Mother,” along with noted Australian singer/songwriter Ben Lee. Friends for over a decade with a shared interest in philosophy and spirituality, they always said they should write a song together. One song turned into ten and Radnor & Lee was born. Their debut album “Radnor & Lee” came out in November, 2017, and they have amassed a growing and passionate fanbase globally, particularly in Brazil where they completed a sold-out tour in January. They are currently at work on their second album due out later this year. Alternately witty, hopeful, yearning, joyful, searching, meditative, and celebratory, Radnor & Lee make music for human beings who are ready to fall in love with being human again.

Unique to Bhakti Fest, in addition to the music stages, the event’s 10th Anniversary will add a Mantra Dome, a dedicated 360° dome space where attendees can join their favorite artists in for an intimate gathering to chant sacred mantras; a visionary art exhibition; and a Kirtan Camp offering a unique and blessed learning journey of two-hour classes to expand singers’ and musicians’ knowledge of how to utilize instruments and chanting for a deeper Bhav experience.

Bhakti Fest’s sacred music, runs from morning until well after midnight. This year’s special anniversary event brings together many acclaimed artists including Krishna Das, Jai Uttal, MC YOGI, Donna DeLory and many more. “Everyone knows that our line-up of sacred music is one of a kind!” explains Sridhar. “Unlike other festivals which book pop bands, we have immersive music in multiple genres which everyone can sing to. The audience is as much a part of the show as the bands on stage.” The list of artists can be viewed here.

Bhakti Fest also offers wellness and wisdom classes. “We have had over 100 submissions from all over the world for our workshops and have picked the most interesting and current lecturers anywhere including Deepak Chopra, Jeffrey Armstrong, Michael Brian Baker, Prem Baba teaching all 4 days, Krishna Das, Paul Mitchell, Parvathy Baul and more.” says Sridhar. As always, the annual festival will deliver an exclusive taped interview with Bhakti Fest elder, and spiritual icon, Ram Dass, whose book “Be Here Now” helped bring Eastern philosophy to the West in the ‘60s. More information on speakers and workshops is here.

In recent years the festival has added sacred spaces for gender specific workshops. Bhakti Kid’s Land, sponsored by Sun Warrior, will feature the Peace Guardians who are taking the children’s program to a whole new level with a packed line up of classes and performances every day from 10am-6pm.

The festival also features a Healing Sanctuary offering a multitude of bodywork options, and the best raw, vegetarian and vegan food options. The Artisan Marketplace offers a treasure trove of jewelry, clothing, art, yoga gear, crystals, incense, furnishings and books from all over the world. Bhakti Fest’s own Bhakti Shoppe will feature highly sought-after items from the bazaars of India.

The Sound Temple has become a new favorite at Bhakti Fest, with a variety of sound baths and sound healing experiences taking place in the evening in the center’s unique, Frank Lloyd Wright-designed Sanctuary. The Joshua Tree Retreat Center plays its own role in the fest, with a sublime high desert setting on 420 acres of sacred ground which includes a pool for aqua-yoga, a walking labyrinth, and traditional medicine wheel.

Bhakti Fest offers a family friendly, drug and alcohol-free environment. These elements combine to create an unprecedented high vibration heart opening experience for all who attend. Bhakti Fest is a non-profit that donates to a variety of charities in India and the US.

The international yoga community is coming together for this anniversary celebration of this truly devotional gathering which welcomes all. Sridhar says, “In reflecting on ten years, we wanted to build spiritual community where every family and attendee can feel safe and be honored on their path.”

Passes and intensive tickets are now available for Bhakti Fest 2018, with discounts offered to local residents, veterans, military, seniors and students, at https://bhaktifest.com/buy-tickets/