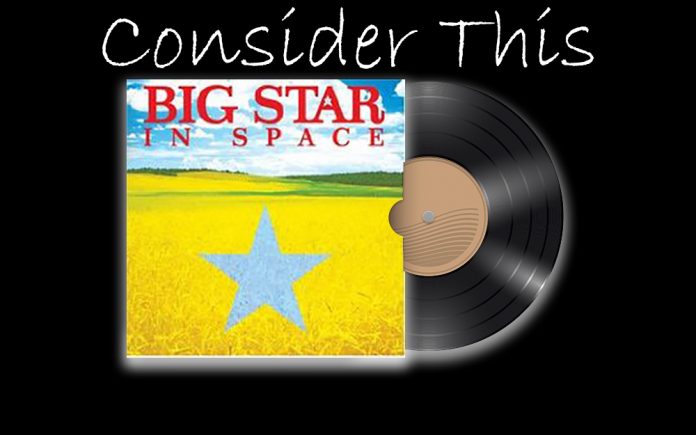 Brian Eno, founding member of Roxy Music, acclaimed producer and Ambient Music pioneer once noted, “The first Velvet Underground album only sold 10,000 copies, but everyone bought it formed a band.” The same could be said about Big Star. The Memphis four-piece never achieved World dominion when they released two completely brilliant records in the early ‘70s, (plus, a thoroughly eccentric third album that saw the light of day in 1978).

Still, their music resonated with musicians who came of age in the ‘80s. Big Star, which featured Chris Bell (guitar, vocals), Alex Chilton (guitar, vocals), Andy Hummel (bass) and Jody Stephens (drums), formed in 1971. All four members had floated through various bands on the Memphis scene, but Alex, at age 21, was the seasoned veteran of the group, having spent his teens fronting the Box Tops. A sharp amalgam of Bubblegum Pop and Blue-eyed Soul, the Box Tops dominated the charts with hits like “The Letter,” “Cry Like A Baby” and “Soul Deep.”

After the demise of the Box Tops, Alex briefly pursued a solo career in New York before returning to his hometown and reconnecting with Chris, who had formed Icewater with Andy Hummel and Jody Stephens. They quickly repaired to Ardent Recording Studio to create their debut. They took their name from the Southern grocery chain that was across the street from the studio.

Arriving in 1972, the flippantly entitled “#1 Record” served as the band’s calling card. Ardent had recently partnered with the Stax Volt label and Big Star was the first Rock group to be affiliated with the venerable R&B label. But slipshod distribution guaranteed the only people who embraced the album were critics. Chris Bell was devastated and quit the band.

He briefly rejoined when recording commenced for their second album, but left for good before it was completed. Radio City, released in 1973, was just as brilliant as their debut. Once again, the Rock cognoscenti grasped their genius, but even though Columbia Records had now partnered with Stax and Ardent, the record never reached the record-buying public, and radio airplay was minimal. Andy Hummel decided to return to college. Alex started working on solo material and Jody joined in. Technically, the duo was still Big Star.

By day, Memphis was as wholesome as apple pie, by night, it was a different story. After dark, a decadent demi monde took hold. It was this hedonistic atmosphere that influenced the creation of Third, (also known as “Sister Lovers”). Produced by Jim Dickinson, the album was finished in 1974, but no label would touch it. It sat on the shelf for four years until the tiny PVC label released it as 3rd. Abandoning the sunny Power Pop of their preceding efforts, the album was dark and desolate, critics were slightly gobsmacked by the stylistic 180, but championed the record nonetheless.

By the time it was finally released, Alex embarked on an erratic solo career and Jody had retreated into production, working with Ardent. Chris had been to Europe, was tentatively recording solo material and was working for his family’s restaurant chain. Two days after Christmas, he lost control of his Triumph sports car, wrapping it around a utility pole. He was killed instantly. He was just 27 years old.

Big Star was a band plagued by missed opportunities and bad luck, but by the end of the “Me Decade,” a bit of mythos began to grow around the band. Music critics and record store clerks already understood their brilliance. Since the original albums were in and out of print, it became something of a rite of passage to receive a homemade cassette featuring “#1 Record” and “Radio City.” Anyone given the opportunity to truly hear Big Star came to the same stunning conclusion. Here was a brilliant American band that the music industry just threw away.

Rather organically, a Big Star renaissance was in the works. In 1986, The Bangles fired the first shot, by including a reverential version of “September Gurls” (the closing cut from “Radio City”), on their multi-platinum album, A Different Light. A year later, The Replacements announced their musical man-crush with their exuberant single, “Alex Chilton.” Soon artists as disparate as Robyn Hitchcock, the dB’s The Posies, Teenage Fan Club and This Mortal Coil were covering their songs or pledging their undying devotion. R.E.M. took it a step further and recorded their sixth effort, Green using the same mellotron Alex and Jody used on 3rd.

Alex and Jody agreed to do a one-off concert as Big Star in 1992 (Andy chose not to participate). Part-time acolytes and full-time Posies Jon Auer and Ken Stringfellow agreed to sub for Chris and Andy, and they were well-received. A few years later, Cheap Trick’s version of the Big Star favorite, “Out In The Street” became the theme song for the TV series “That ‘70s Show,” and the mainstream began to discover that Alex and Chris were truly Memphis’ answer to Lennon & McCartney.

The new incarnation of Big Star continued to perform sporadically, but it was a bit of a surprise to Jody, Jon and Ken when Alex spontaneously announced that the band were ready to record an album. In 2005 they returned to their old stomping grounds, Studio A at Ardent and began the process of collaborating on new songs that would become the album In Space. Although Alex was notoriously dismissive of past Big Star glories, he entered into the recording process exhibiting his own brand of cynical enthusiasm. Now the cool kids at Omnivore Recordings have reissued In Space with a surfeit of bonus tracks.

The album glides into gear with “Dony,” a twinkling ode to instant attraction. Splayed guitar chords are bookended by slithery bass lines and a chunky backbeat. Alex’s vocals remain appealingly rough-hewn and boyish even as his powers of seduction seem a bit rusty; “Surely you’re aware, you’re blowing my mind/The sun in your hair seems to stop time.” A surprising saxophone solo asserts itself on the break, tangling with skittery guitars.

As the recording process for In Space commenced, Alex insisted the band try their hand at “Aria Largo,” a classical piece from Baroque composer George Muffat. A version of the song made the album along with a couple more tracks that explore new musical territories. “Love Revolution” is powered by a four-on-the-floor beat, chicken scratch guitars, call-and-response vocals, rubbery bass, plus a honking sax and coronet. The lyrics offer up a series of tongue-in-cheek ultimatums; “Brothers and sisters, we need a love revolution, here’s our list of demands/1. We need to get it together, 2. We demand the right to do it all night, 3. We need a platform, 4. We need some platforms.” The song lands somewhere between the down home Soul of Archie Bell & The Drells, the satiric protests of Country Joe And The Fish and the syncopated groove of the Style Council. Then there’s the willfully primitive “Do You Wanna Make It,” which wraps Surfin’ and Spyin’ instrumentation around the time-honored questions; Do you wanna make it, feel it and get it? The listener might require a post-coital cigarette after this one.

The best tracks here feel like a Big Star/Posies amalgam. “Lady Sweet” is a bit of a backhanded love song, blending chiming guitars, gilded keys, walking bass lines and a hi-hat kick. Stacked harmonies convey the autumnal ache of lyrics like “Lady Sweet, don’t tell me that I’ve gone crazy, and your beauty is only in my mind/For I can say that what I see is exactly what I need to find.” A surprisingly muscular guitar solo whooshes past this equivocation.

Love, according to Big Star, has always been the ultimate Catch-22, So, it’s startling to find all the stars truly aligned on “February’s Quiet.” Sunshiny and effervescent, it’s a straightforward declaration, anchored by jangly guitars, rubbery bass lines and a hopscotch rhythm. Cheerful lyrics like “November rain, December snow, January’s oh so cold, February’s quiet and still March is flowers on the sill, and we’re still together, ‘cause we gotta be together now” are reinforced by honeyed harmonies fuzztone guitar.

Long ago, the Beach Boys rhapsodized about “The Warmth Of The Sun,” naturally Big Star felt it necessary to flip the script with “Turn My Back On The Sun.” Sparkly piano, tensile bass and fizzy guitars lattice over a stutter-step beat. Hawthorne-flavored harmonies, which shiver and shimmer, belie melancholy lyrics like “So, I guess I’ll turn my back on the sun, something about it, just don’t seem to be as fun/I wanted to feel warm and not so alone, and you were right above me every day, then without warning I got so burned, I couldn’t sleep at night when you went away.”

Finally, “Best Chance” fuses sugary guitar licks with chugging bass and a pile-driving beat as winsome vocals crest over the top. The melody and arrangement are sharp and economical, cautiously optimistic lyrics ask that we take a leap of faith; “Rise and greet a brand new day, there’s no reason why we should be waiting, you and I gotta move/Don’t you worry, you’re troubled you’re sad, this is the best chance that we’ll ever have.” The song is a bit of a showcase for the often unsung talents of Jody Stephens, who pounds his kit with alacrity, abandon and authority, recalling thrilling electricity of Keith Moon.

The balance of the album tends to align closely with the guys’ Garage Band beginnings. “A Whole New Thing” harkens back to the birth of Rock N’ Roll.

Snappy guitar riffs echo the primitive aplomb of progenitors like Chuck Berry, Carl Perkins and Buddy Holly, pounding piano notes summon the Killer, Jerry Lee Lewis, while the melody and arrangement are pure British Invasion. The early ‘60s throb of “Hung Up With The Summer” features prickly guitars, rumbling bass and a tick-tock rhythm. Vocally and instrumentally, it splits the difference between Chad & Jeremy and the Byrds. Last but not least, there’s a fiery cover of The Olympics’ “Mine Exclusively.” Swapping out the infectious Soul shake of the Los Angeles band’s original, Big Star weds super-charged guitars and spidery bass to a jittery backbeat.

We join the closing track, “Makeover,” already in progress. This loose-limbed raver recalls the manic anarchy of The Replacements’ Hospital,” and includes Noir-ish sax solos, bee-stung guitars, Ox-ified bass runs and a thwacking beat.  Extemporaneous lyrics seem to take aim at late night infomercials; “Actually fits in the palm of your hand…define your chest…but wait, there’s more!” It’s a shambolic end to a great record.

Bonus tracks include the raw-boned “Hot Thing,” plus a rough mix of “Dony,” a demo of “February Quiet,” two sketches of “Lady Sweet” and a sun-kissed acapella rendering of “Turn My Back On The Sun.”

Sadly, this is the final official Big Star effort. Alex Chilton suffered a fatal heart attack in early 2010; Andy Hummel succumbed to cancer a few months later. Jody Stephens remains the last man standing from the original line-up. In Space might have felt like a disappointment when it was originally released; perhaps because it doesn’t replicate effortless genius of their early ‘70s albums. Instead, the fragility that characterized those seminal recordings has been replaced by a quiet self-assurance. Robyn Hitchcock once remarked Big Star’s music felt like “A letter posted in 1971, that didn’t arrive until 1985.” Some people are still catching on, In Space gives them one last chance.