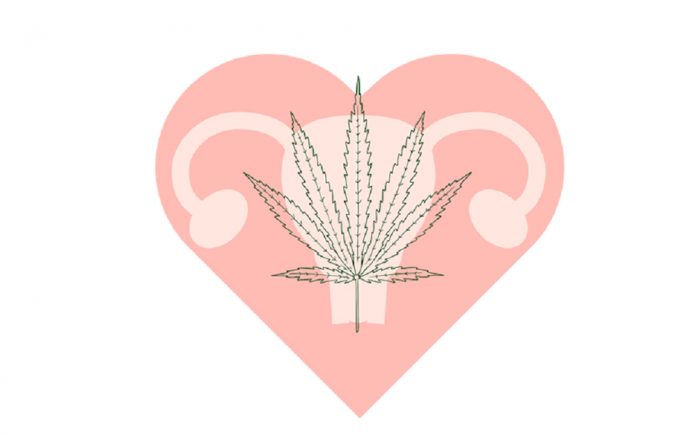 And that’s what we will be exploring today.

Cannabis has been used to treat the human reproductive system in our history. A uterus has it’s very own nervous system and four kinds of ligaments. Not to mention its own system of arteries within itself. Uterus having people experience pain in a cycle monthly from their teens to their old age–all from this life giving organ.

Cannabis is a phenomenal plant that can produce synergistic compounds that work with the human body. The plant can present itself as male, or female, depending on its development. The THC rich version we all love to experience and medicate with is the female development of the plant and is referred to as cannabis. The male plant is called hemp and produces a multitude of CBD rich seeds and no buds. Working with the plant hands on gives you a complete understanding of the separate subtle energies of each version of the plant. The cannabis female plants are very sensitive and responsive. When they are in their optimal living conditions and cared for the plant produces amazing buds filled with mature resin glands and good intentions. I personally believe it’s here to heal us all.

As a female bodied person, I have found immense relief from the cycle of pain my uterus puts me through by working with cannabis. While my uterus does it’s thing, I have learned to care for myself with everything from hash suppositories to cbd baths and smoking concentrate mixed into indica heavy flower joints.. And I’m not alone. Uterus having people across the world have found the plant useful in dealing with these issues. In the 19th century, cannabis was commonly used. It was often that you would find cannabis tinctures and yards of hemp. Most importantly it was researched. I love reading about the 19th century because science was so innocent and the method was firsthand and tried. In the American Journal of Homeopathic Materia Medica and Record of Medical Science by Dr. W.A.D Pierce, the 19th century use of cannabis is well documented and explored by Pierce. Cannabis was formally introduced to the US as a medicine in 1840 and Pierce explored cannabis throughout the end of the 1800s. Queen Victoria herself used cannabis in the late 1800s. Many cannabis enthusiasts cite Queen Victoria as the first woman to use cannabis for PMS.

Cannabis works with the uterus through its vast amount of cannabinoid receptors. At this time research does not tell us why the uterus has so many receptors in the gynaecological urinary tract. The vagina has a mucous membrane that can easily absorb cannabis through the form of a suppository made with high quality cannabis concentrate. In the UK many researchers such as Columbia Care and Westmed are working diligently to learn more about cannabis including its relationship with the uterus. Research available shows that not only can cannabis assist in the monthly cycle of PMS but also endometriosis, menopause, pelvic conditions, and the sexual health spectrum — including pleasure.

Physician T.L Wright claimed that cannabis was helpful for vomiting during pregnancy in the 19th century as well. Across cultures and timelines on the other side of the world, the Egyptian medical text Ebers Papyrus suggested that cannabis was used during active labor. It is also said to have been involved in the pregnancies of high class Roman women during labor. Fascinatingly in her book Cannabis in Medical Practice: A Legal, Historical, and Pharmacological Overview of Therapeutic Us of Marijuana, Mary Lynn Mathre R.N describes a finding in 1992 of the remains of a 14 year old girl in the 4th century died giving birth and they found ashes in her abdominal area containing THC. More recent studies can be found on the women of Jamaica by Dr. Dreher in her comprehensive study over 25 years “Prenatal marijuana exposure and neonatal outcomes in Jamaica: an ethnographic study” in 1994.

As the industry continues to grow there is no way the female bodied person will be left behind. Ask your dispensary about brands like FORIA, Yummi Karma, Kikoko, and Humboldt Apothecary to explore how you can work with your uterus with cannabis.