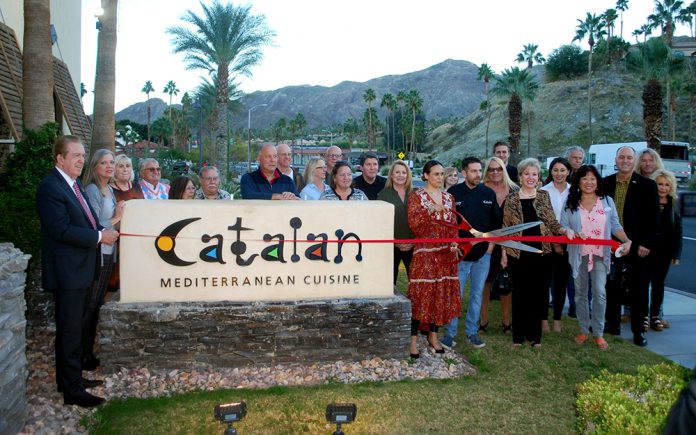 On January 10, the City of Rancho Mirage hosted a ribbon cutting ceremony for local restaurant favorite Catalan Mediterranean Cuisine to officially launch the new Sunday brunch hours. In attendance were members of the Rancho Mirage Chamber of Commerce, Mayor Iris Smotrich, and Director of the 28th Senate District Glenn Miller.

“It says a lot that we had our council members here celebrating this local business because it doesn’t happen all the time. Anytime there’s a significant change or milestone, that is something worth celebrating, especially with all that Catalan provides for the community,” said Executive Director of the Rancho Mirage Chamber of Commerce Katie Stice.

Although the Catalan menu is constantly changing every few months to accommodate the ingredients that are not available all year long, this is the first time that the restaurant will be serving brunch. The new brunch service will be served on Sundays between 10:30 a.m. and 1:30 p.m. Catalan will be open Tuesday through Sunday from 5 p.m. to 9 p.m. for dinner the rest of the week. 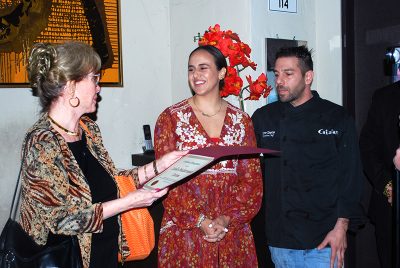 “This is a new year, so we wanted a new business venture. What we bring to our menus is mostly flavors. It’s not that we are serving the exact same Mediterranean dishes, but the overall taste and seasonings mesh very well together,” stated General Manager Cynthia Davis

Some of the new brunch specialty dishes were available to be sampled during the ribbing cutting ceremony like the pork or chicken sausage, Smoked Salmon Hash (made with potatoes, caramelized onion, poached eggs, and grilled bread), and Chocolate Filled Churros. Other brunch specialties that will be available to diners include the USDA Prime Flat Iron Steak & Egg (made with braised escarole and saffron hollandaise sauce), Cast Iron Baked Authentic Tortilla Española (with potato, artichoke, caramelized onion, smoked mozzarella, and white truffle oil), Brioche French Toast, Rock Shrimp & Polenta, and the Ibérico Egg Benedict. 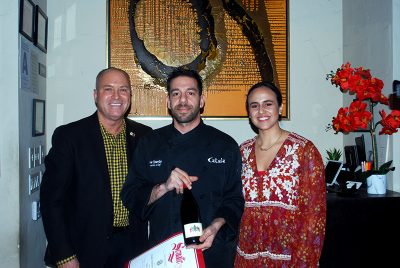 Non-alcoholic house-made wellness shots are also on the new brunch menu. The first selection is made from huckleberry, mint, turmeric, ginger, and lemon while the second choice is blueberry, orange juice, cayenne, honey, and thyme.

“Even though we’ve been here eight years, this is the first brunch menu we have ever done before. There are a lot of classic brunch items on the menu, but they all have our signature Spanish-Mediterranean twist on them. For example, our version of Eggs Benedict has Ibérico ham instead of Canadian bacon. We always try to do things with simplicity,” explained Chef Owner Drew Davis. 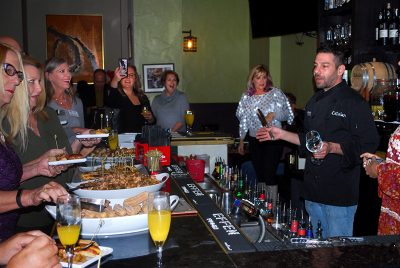 Most of Davis’ career has been centered in New York and Miami, where he worked as a private chef to various celebrity clientele, until he moved to the Coachella Valley eight years ago and took ownership of Catalan Mediterranean Cuisine. Of the new brunch menu items, Davis’ personal pick is the Smoked Salmon Hash with Poached Eggs.

Catalan Mediterranean Cuisine currently has a staff of 25 people, allowing for a close-knit familial atmosphere at work that translates into the expert care put into the food.

“I think what has allowed us to stay in business for so long is that we are a very unique restaurant in the Coachella Valley and we will continue to serve our community with delicious food while treating them like they’re part of the family,” said Cynthia Davis.

A noteworthy deal to remember next time you come to Catalan Mediterranean Cuisine is that all you can eat tapas are available to diners on Tuesday and Thursday nights for $22.95 at the bar area only. To make a reservation at the restaurant or to book it as a venue, call 760-770-9508 or email cynthiadavis@catalanrestaurant.com.