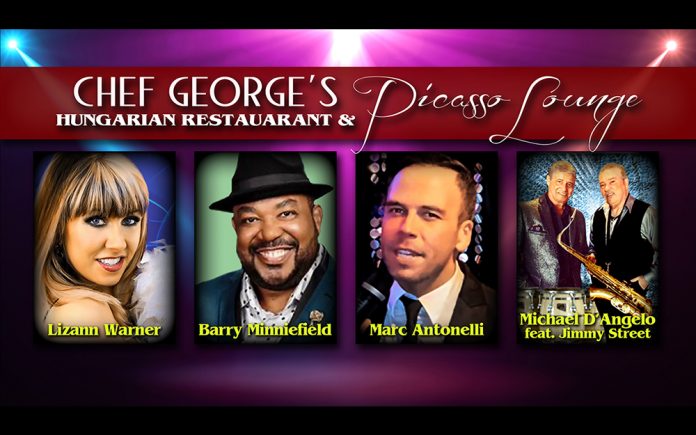 Entertainment in an Intimate Setting

The line-up of entertainment at Chef George’s Hungarian Restaurant & Picasso Lounge is absolutely stellar. The eatery is located at 40100 Washington Street, Suite #125 in Bermuda Dunes, California and is open Tuesday through Sunday 5 p.m. to 2 a.m.

Coachella Valley Weekly spoke with some of the performers.

Lizann Warner is one of the busiest vocalists around. Known largely for her Heart tribute band Dog N Butterfly, Warner emphatically embodies the voice of Ann Wilson. She also has her original music project Eliza which has produced the 6-song EP Anything Can Happen, available on her website eliza-music.com. Warner also has professional recording credits that include television ad jingles and video games including the popular Guitar Hero 3.

With Warner, Chef George customers can expect a show that includes a variety of musical genres that includes Pop, Jazz, R&B, Classic Rock, Country and more. Warner also includes an occasional vocal impression of classic icons such as Cher, Barbra Streisand and Judy Garland as well as contemporary artists like Adele and Lady Gaga.

With over 600 songs in her répertoire she has many favorites like “The Lonely Goatherd” from The Sound of Music, the rarely performed 70’s hit “At 17” by Janice Ian, “Mercy” a pump’n dance number by Duffy, “Half Breed” by Cher and “Cowboy Sweetheart” by Leann Rimes. She also sings the classics like “Misty” by Johnny Mathis, “At Last” by Etta James and “Hallelujah” by Leonard Cohen. And then there’s the more modern titles she delves into like “Wicked Game” by Chris Isaak and “Me Too” by Meghan Trainor.

She also receives a lot of requests for “Shallow” by Lady Gaga. She nails 50’s gems from Elvis, Dion, and Bobby Day as well as 70’s hits from Stevie Nicks, Carole King, and Karen Carpenter.

Warner is a Coachella Valley mainstay and is elated to be a part of the Chef George family. “I believe the best part of Chef George’s Picasso Lounge is that it’s an intimate venue where guests can enjoy live performances in a warm setting while dining on comfort-style food with generous portions and friendly people,” Warner shared.

Warner also enjoys the food of Chef George’s, although she wouldn’t claim a favorite. “It’s hard to nail one favorite dish. I would say my top three are the salmon dinner, stuffed cabbage rolls and chicken marsala,”Warner confessed. “Each is usually served with a side of their signature Hungarian red cabbage which I love.”

You’ve seen Barry Minniefield on NBC’s The Voice’s season 8 as part of Adam Levine’s team belting out the Billy Paul hit “Me and Mrs. Jones” to earn a coveted position vied for by over 100,000 contestants. In the film world, Minniefield is known as “Hollywood’s Singing Chef.” He earned this title for his extraordinary talents in acting, singing, and as a gourmet chef during a 10-year stint at the world-famous Improv Comedy Club. Minniefield has performed and/or prepared gourmet cuisine for a long list of celebrities including: Roseanne Barr, Tom Arnold, Cher, Milton Berle, Jay Leno (on The Tonight Show), Arsenio Hall, Nancy Wilson, Arnold Schwarzenegger, Oprah Winfrey, and Robin Williams. In 1990, Minniefield decided to transition from cooking and comedy to a larger focus on his music. He never looked back.

Through his success, Minniefield credits his family as his biggest influences. “My father would have that stereo blaring with Jazz and Big Band music, especially on Sundays. My grandmother also had me singing Gospel in church and my uncle worked for several different record companies, so I was always immersed in good music, reflects Minniefield. “I dug The Jackson Five; I’d practice their numbers in the basement with my cousins. I used to love watching The Ed Sullivan Show and checking out all the musical acts. Among role models, Minniefield cites Frank Sinatra, Sammy Davis, Jr., Liza Minnelli, Ella Fitzgerald, and Sarah Vaughn. “Stevie Wonder has been a real influence too, both his music and singing. He’s challenged us all to be more creative, to be better.”

Minniefield has taken all of his musical experiences and molded a well-crafted show. “I’m very eclectic. I’ll try to do songs for everyone so they can expect Big Band, Swing, Motown, Blues, a little Country, Soft Rock, Rock ‘n’ Roll and even a little bit of Opera, so I try to cover all the bases in my shows,” he shared.

Minniefield has also been welcomed into the Chef George family with open arms. “Working with Chef George and Lana, it’s a family atmosphere. Very nice people.” He also has a favorite dish. “The Chicken Marsala is to die for!”

Watch Minniefield do his thing on Wednesday evenings 6:30-9:30 p.m.

Marc Antonelli was raised in the suburbs of Boston, Massachusetts and studied vocal performance at both the Boston Conservatory and Berklee College of Music. In 2011, Antonelli started performing in Atlantic City and after only six months, was promoted to a headlining act for two successful productions with rave reviews from the New York Times and Atlantic City Weekly.

In 2017 and 2019, Resorts Hotel and Casino called upon Antonelli to headline the casino’s prestigious, “superstar theater”, where he performed two headlining stage shows on the big stage to one of the biggest turn outs in his young career. Antonelli then decided to take his career to Las Vegas at The Venetian where he performed as the lead vocalist of the ‘Venetian Trio’ for countless guests in St. Mark’s Square and most recently was a tenor for cross-over mega star, Andrea Bocelli at the MGM Grand Garden Arena.

Antonelli has also made one-night headlining visits and lounge appearances in various casinos throughout the Nevada, New Jersey, New York and Pennsylvania. With a repertoire of Classical, Pop, Jazz, musical theater and other contemporary stylings in his arsenal, Antonelli also captivates his audience with the ability to sing in English, Spanish, Italian, and French.

Antonelli has found a cozy desert home at Chef George’s. He shared, “The best part about performing at Chef George’s is being able to connect with my audience on a much more intimate level. Given the intimacy of the establishment, it’s always an evening of musical elegance when I’m there.”

That musical elegance is purveyed by Antonelli as he sings songs from some of the best modern voices of our time. “My favorite tunes to perform at Chef George’s are songs and arrangements from David Foster, Andrea Bocelli, Josh Groban and Michael Bublé.”

The menu at Chef George’s is full of favorites but there seems to be a consensus among musicians that one dish is a must try as Antonelli attests, “My Favorite dish, by far, is the Chicken Marsala. UNBELIEVABLE!”