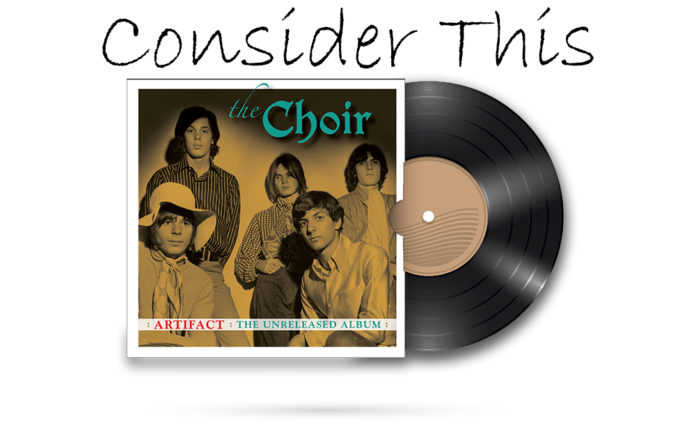 On a Sunday night in February, 1964, America had its collective mind blown when the Beatles made their first appearance on the “Ed Sullivan” show. One of the most long lasting, ancillary effects from that performance is that it motivated kids everywhere to plug their guitars into amps and start their own bands.

Almost immediately, thriving music scenes sprang up in towns and cities all across the country. Sometimes nascent combos, (like the Box Tops from Memphis, the Kingsmen from Portland and the Sam The Sham & The Pharaohs from Dallas) had hit singles chart in the Top 10. But there were literally hundreds of bands (like the Jynx from Memphis, the Nazz from Philadelphia and Zackary Thax from Corpus Christi), who achieved only regional success.

The Choir was that kind of band. Massively popular in their hometown of Cleveland, Ohio, they had a local #1 hit, “It’s Cold Outside.” But the song just missed cracking the Billboard Top 40, only reaching #49 nationwide. Somehow their local acclaim never translated to Worldwide dominion, but it should have.

Originally known as The Mods, multi-instrumentalist Dann Klawon formed the band in Mentor, a Cleveland suburb, in 1965. There were three incarnations of The Mods before they morphed into The Choir. Between 1965 and 1967, they endured a series of line-up changes that severely curtailed their momentum. Three on-and-off members, Jim Bonafanti, Wally Bryson and Dave Smalley eventually achieved international acclaim as 3/4s of the Raspberries.  But that wasn’t until the early ‘70s.  (Ironically, future Raspberries front-man, Eric Carmen auditioned for The Choir, but didn’t make the cut, so he joined their arch rivals, Cyrus Erie).

Line-up #3 was responsible for “It’s Cold Outside,” unfortunately, follow-up singles couldn’t sustain that momentum and the band broke up in early 1968. A few months later a new version of The Choir emerged, sans founder, Dann Klawon, but featuring Phil Giallombardo on organ, Randy Klawon on guitars, Denny Carleton on bass, Jim Bonfanti on drums and Kenny Margolis on piano. Vocal duties were evenly split between all five guys.

Between 1968 and early 1969, the five-piece wrote and recorded 10 tracks at Ken Hamann’s Cleveland Recording Studio. Somehow, the music remained unreleased until Ken’s son Paul, (owner of Suma Recordings in Painsville, Ohio), unearthed the original tapes.  Now the cool kids at the Omnivore label have remastered each song. The end result is Artifact: The Unreleased Album. Although a couple of these songs popped up on a compilation from the mid ‘90s, this is the first time most of this material has seen the light of day.

The album opens with the Baroque splendor of “Anyway I Can.” Kaleidoscopic keys collide with blistering guitar riffs, a propulsive backbeat and quivery vocals. Plaintive lyrics pledge undying fealty to a long-distance love; “When I’m far away she’s good to me, I know my love for her was meant to be.” Jim Bonfanti pounds his kit with such authority, it undercuts the slightly sappy sentiment of the lyrics.

Previous incarnations of The Choir leaned toward the concise Power Pop crunch pioneered by British Invasion bands like the Beatles and the Kinks. But the 1968 edition tilted heavily toward Psychedelia. A couple of tracks, “If These Are Men and “I Can’t Stay In Your Life” add an array of colors to their sonic palette.

“…. Men” weds swirly guitar riffs and polychromatic keys to a walloping rhythm. Despite the urgent,  Alpha-Male melody and arrangement, the lyrics are surprisingly sensitive; “My friends say shy away from her as much as you can, don’t show Your feelings or get hurt, cause you must be a man/But if these are men Then count me out, leave me stand in my doubt, cause I’ve been staying away from you.” On the instrumental break, Phil Giallombardo unleashes a feverish organ solo as Randy Klawon layers in razor sharp guitar riffs over Jim Bonfanti’s pummeling percussion. The tune slows momentarily before launching into a frenetic coda

On “I Can’t Stay In Your Life,” dirty, distorto power chords side-swipe crashing piano notes, sinewy bass lines and acid wash organ, over a whip-crack beat. The lyrics quickly dismiss a Machiavellian ex; “I tried to love you but I soon found out I didn’t fit the clothes you wore.” A tart declaration of independence; “I don’t want what you have or what you’re aiming for/The very next thing that I’ll do is walk right out your door,” is underscored by instrumentation that builds to a cyclonic intensity. The tempo accelerates as rattler riffs coil around spatial keys until the song collapses in a sweaty, sodden heap.

The action slows slightly on two tracks, “Ladybug” and “It’s All Over.” The former blends treacly organ, thumpy bass, a tick-tock rhythm and surprisingly gritty Blues guitar. It locks into a goose-step groove as cryptic lyrics employ the same flower power imagery as “Lucy In The Sky With Diamonds.” The latter is a piano driven lament that is melancholy and surprisingly soulful.

On an excellent record packed with transcendent tracks, two cuts stand out. “Have I No Love To Offer” is the album’s magnum opus. Clocking in at nearly six minutes, it opens with meandering piano chords and plaintive vocals. Soul-searching lyrics unfurl like a cri de couer, asking “Why Can’t I live my life all alone and free, I always dream about the way it used to be.” The melody quickly gathers speed, accentuating switchblade guitars and a crisp bongo beat. Upping the ante on the extended instrumental break, a waspish guitar solo intersects with shimmery organ colors and thundering drums. The song presages the Bee Gees’ sad-sack lament, “How Can You Mend A Broken Heart,” but adds a bit of mid-western grit to the proceedings.

Other interesting songs include the epic instrumental “For Eric.” Here, tentative piano, shaker percussion and fluttery organ give way to a see-saw rhythm. The melody pivots between a sedate Cha-Cha-Cha and a seductive Bolero. The shape-shifting tempo quickly escalates, pounding out a tribal tattoo. Slithery organ notes snake through the arrangement, supplanted by a mind-bending guitar solo. They also offer a pitch perfect take on the Kinks deep cut, “David Watts.” The album closes with “Mummer’s Band,” a bit of a Music Hall- flavored throw away.

Although The Choir influenced a plethora of Ohio bands, and remain a touchstone for Power Pop aficionados, they’ve never really gotten their due. Artifact gives the world another chance to (re)discover this amazing group. 50 years ago they were ahead of the curve. In some ways, they still are.