Chris’ musical education began in the womb. Born in 1984, Kristian Price Perez grew up in Miami, Florida, the eldest son of Betsy and Rudy Perez. His dad was a Grammy Award winning producer and songwriter and Chris grew up with a recording studio literally under his bedroom.

Aside from his dad, his earliest musical inspirations came from a Jackson 5 anthology CD and the first disc of the Beatles’ White Album. (He finally checked out the second disc during his teen years). He began playing piano as a toddler and taught himself guitar at age 17. A good friend had left her guitar and amp at his house, and he placed the guitar on his lap and figured out chords on the fretboard the same way he would with a piano. To this day, he plays guitar, and any string instrument using the same unorthodox method.

Chris was just a kid when he formed his first band, The Dropouts. Not so much a band as a duo, with Chris on keys and his pal Boz on didjeridoo (!) By his teens he had expanded his musical horizons exponentially. Of course the rest of the Beatles oeuvre, (specifically Abbey Road) blew his mind, along with singer-songwriters like Nick Drake, Harry Nilsson, Emitt Rhodes and John Martyn. He was also inspired by disparate styles like Brazilian Psychedelia, Free Jazz, Bossa Nova as well as bands like the Kinks and Big Star.

At Miami Beach Senior High Chris played in the school’s Rock Ensemble. He formed a musical partnership with fellow ensemble-ites, Fernando Perdomo and Roger Houdaille. As Dreaming In Stereo, the trio self-released an EP. Fernando went on to another project and Chris and Roger returned as Monkeypox. The band mined British Invasion bands as inspiration and invented an elaborate faux history that rivaled Spinal Tap. A wildly prolific combo, they released three LPs, five singles and a feature-length film and soundtrack.

In 2005, Chris began collaborating with his younger brothers, Mikey and Corey as well as drummer Alex Ibanez. They simply called their band Price.  The four-piece received a lot of buzz, they quickly signed with Geffen Records and relocated to Los Angeles.

Acclaimed producer Tony Berg (Peter Gabriel, Michael Penn, Van Morrison), signed on and they went to work crafting an album. By 2006 Price earned a feature spot at SXSW. Two Price songs even made it on to soundtracks, “Blonde Ambition” and “Nancy Drew,” respectively. But the full-length album never saw the light of day. Price and Geffen Records parted company.

Next Chris hooked up with ex-Rooney guitarist Taylor Locke for his project, Taylor Locke & The Roughs. They released two well-received albums, Grain & Grape and Marathon, but by early 2012 he was back on a solo path. His next opportunity came when his Blackberry was stolen.

Screwing around with his new i-phone, he recorded a song, struck by the sound quality, he downloaded a four-track app and decided to record an entire album on his phone. The result, Homesick, was released in 2012 and received glowing reviews. Around this time he met a couple of musical idols, Linda Perhacs and Emitt Rhodes.

Linda, who recorded the Folk/Psych masterpiece Parallelograms in 1970, was coaxed into the recording studio after a 44 year absence. Chris produced that album, entitled The Sound Of All Things Natural.

Emitt had been a wunderkind, he began making music as a teenager in the mid ’60; first with the Merry-Go-Round, then as a solo artist. He recorded three solo albums in the early ‘70s, writing and playing everything himself in a studio he built in his parents’ backyard in Hawthorne. Soured by execrable experiences with the record industry, he walked away from performing and recording his own music. Introduced by a mutual friend, Chris had hoped Emitt would produce Price. Those plans never came to fruition, instead, a friendship blossomed.

Chris played his own songs for him, but was respectful of Emitt’s boundaries. One day Emitt surprised him with lyric sheets and chord changes for about 20 songs. Chris encouraged Emitt to record the songs in his long-dormant backyard studio. A surfeit of well-known L.A. musicians lent a hand and Rainbow Ends arrived in early 2016 to unanimous acclaim.

Even in the midst of producing, Chris made time to create his own music, by 2016 he had amassed over 30 songs. Winnowing them down to 14, he returned to the studio, self-producing what would become his newly released sophomore solo effort, Stop Talking. 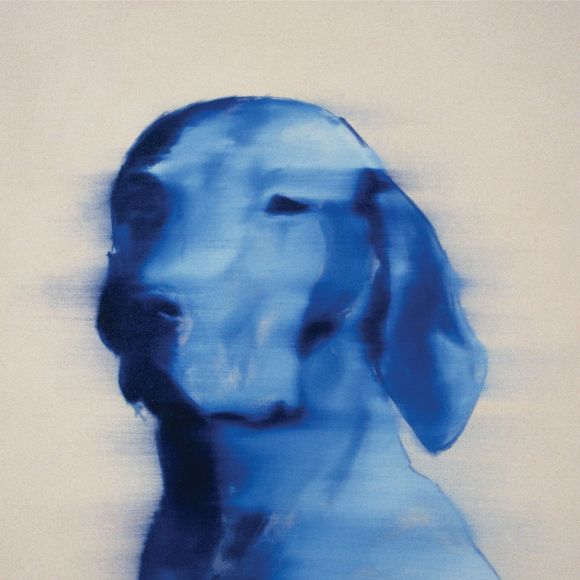 The album opens tentatively with the title track. Hazy loops and pinging sonar effects connect with spiraling guitar and staccato percussion. Jittery lyrics equivocate between the desire for instant gratification; “There’s more to life than being next to grace, I gotta cut to the chase,” and the realization that patience yields bigger rewards.

Three tracks time travel to an era when the intersection of Soft Rock and Soulful R&B wasn’t so incongruous. On “Hi-Lo” sweet acoustic arpeggios lap over a languid melody. Chris’ mien is melancholy as he reluctantly agrees to a break-up. Thumpy drums and ticklish keys are added to the mix as his falsetto vocals echo Marvin Gaye and Hall & Oates in equal measure. His acquiescence seems in question when he makes this impassioned plea; “I can’t turn away, till you turn around, Darling walk away don’t you make a sound.”

40 years ago, the shimmery Soul of “Sigh” could sandwich comfortably between the Rolling Stones’ “Angie,” and the Manhattans’ “Kiss And Say Goodbye.” Chris wears his heartbreak on his sleeve confessing “Between the light and dark I cry, between the right and what’s left I sigh.”

Plinky piano chords are shadowed by soaring strings and shang-a-lang guitar on “Man Down.” Here Chris’ supple tenor shapeshifts from a gentle croon to a grit and gravitas that recalls Robert Lamm, original lead singer of Chicago. The melody and arrangement navigates a series of aural switchbacks that evoke comparisons to Philadelphia Soul, Maria Muldaur’s “Midnight At The Oasis,” English Music Hall music and the Beatles’ “You Never Give Me Your Money.”

Of course, the Beatles’ influence is ever present, especially on three songs, “Once Was True,” “Algebra In The Sky” and “Darkness.” “Once…” employs a buoyant, sing-songy melody that almost takes the bitter sting from a broken relationship. Oscillating acoustic filigrees intertwine with a string section and Chris’ boyish vocals. He searches his soul offering up this brittle post-mortem, “Once I had a sure hand, if I could keep you fixed in my sights it didn’t matter which way the wind blowed/Until we had to crash land, we lived each day like it was the last, now I’ll have to live for tomorrow.”

“Algebra In The Sky” mirrors the supersonic Psychedelia of “Tomorrow Never Knows.” Whooshy guitar roar over mellotron, tape loops and a jackhammer beat. Spongy, squiggly and sticky, it slows to a tick-tock rhythm as Chris imparts some non sequitur wisdom; “But something’s changing me, something under my skin/A soft epiphany to realize the world I’m in, the cycle turns the wheel, a revolution up above/A dream that seems so real, each morning raining down with love.” Backwards vocal and instrumental effects close out the track.

Meanwhile “Darkness” folds three songs into one, pivoting from a gauzy Waltz on the verse to calibrated cacophony on the chorus. Chris is nearly a one-man band layering 12 string acoustic and electric guitar, E-bow, bass, chiptune music, (synthesized, programmed electronic music), and effects. His brother Adam adds explosive drum fills. On paper, it sounds like musical schizophrenia, but somehow it works.

The combined influence of Harry Nilsson, Nick Drake and Emitt Rhodes are synthesized on three tracks, “Pulling Teeth,” “You And Me (And Everyone Else),” and “One Of Them.” “… Teeth” is a minor key masterpiece, fluttery acoustic guitar fills are tethered to a kick-drum beat. Chris’ feathery falsetto and the ethereal arrangement recalls Nilsson’s latter-day gem, “Perfect Day.”

Chris’ multi-tracked vocals lattice over the plaintive piano ballad, “You And Me…” The lyrics offer a carpe diem philosophy; “And the years roll on like clouds, must we waste the time we’re allowed? Don’t pretend there’s more than now, and wait for heaven to be denied.”

Finally “One Of Them” is as brutal a kiss-off as Nilsson’s pithy “You’re Breaking My Heart.” Roiling bass lines and rollicking, barrelhouse piano runs frame this caustic dismissal, “You’re just like one of them,” Chris nearly sneers, “when I thought you were different.”

Probably the sweetest and most poignant tune is “Father To The Man.” Achingly pure and tender, it flips the script on Harry Chapin’s mildly odious “Cat’s In The Cradle.” Lowing cello dovetails with strummy acoustic guitar, Chris paints a vivid portrait of a son witnessing his taciturn father made vulnerable by old age. “Once he was terrifying, I wouldn’t dare to say a word to stand up to my old man/Now he wouldn’t dare to stand without someone’s helping hand, he says ‘go on, put me away.’” As father and son contemplate assisted living, Chris notes “time breezes by and then the child is father to the man.”

Other interesting tracks include the lush “Contrition,” which shares some musical DNA with Crowded House’s “Fall At Your Feet” and the sly Tropicalia of the aforementioned “Just In Time.” The album closes with “Anhedonia.” Choir boy harmonies and finger-picked guitar belie lyrics that touch on a psychological condition that is characterized by an inability to experience pleasure from normally enjoyable activities.

Back in 1968, John Lennon and Paul McCartney were at a press conference to announce the formation of Apple Corps. Famously, they each named Harry Nilsson as their “favorite American singer and group.” Nearly 50 years on, if they could answer that question today, there could only be one correct reply, Chris Price. Stop Talking is a masterpiece from start to finish.