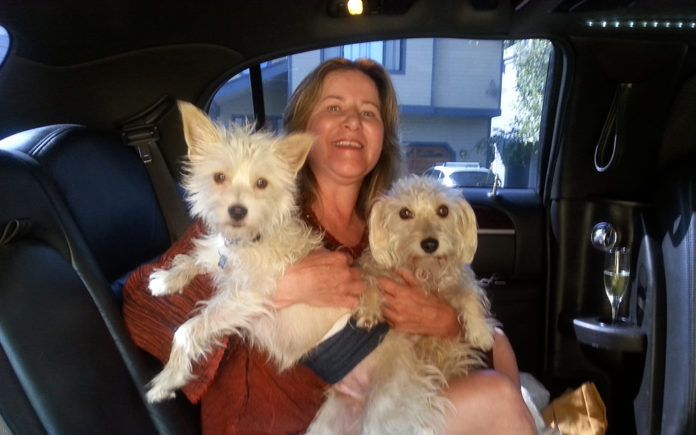 The small white Terrier at the animal shelter was nicknamed “The Climber”. Dogs in public shelters usually don’t have names, but this fellow at the county shelter in Thousand Palms caught everyone’s attention when he climbed out of his kennel and scampered wildly through the public area. In the cartoons, we root for the dogs who escape from the shelter. However, there was no cause for celebrating when it was decided he might be euthanized due to this behavior. The facility simply could not contain the dog any longer.

I spotted the same terrier several days earlier at the shelter, and paused to take a photo for Facebook in the hopes of attracting an adopter. I heard about this amazing ambidextrous pup’s ability to climb out of the shelter’s tall fencing. When the rescue staff telephoned me with the urgent message, “We have to get the white terrier out immediately, can Loving All Animals take him?” we didn’t hesitate.

Karen Phelan offered to foster a dog, and she responded affirmatively told about the dog’s plight. It was critical that the dog we named Duffy be placed in a home with a secure walled in yard from which he could not escape.

Duffy and I arrived at Karen’s lovely home, and the walled in front and back yards were a “fortress” ensuring this little escape artist would be safe. Karen recalls, “The day he arrived, Duffy was afraid and defensive, he didn’t know what was going on. After a few days, his personality began to emerge. He was a hidden treasure, and all he needed was a second chance.”

Karen fostered dogs before. Her own dog KJ is a rescue pup from the Lancaster shelter near Los Angeles. Karen noted that the new foster dog was terrified when she turned on the television, leading us to believe he’d been kept as a ‘backyard only’ dog. She was determined Duffy would have a new life that included being part of a home with his humans.

Karen Phelan is a great advocate fostering. She explains, “Fostering a dog is the most gratifying experience I’ve had with regard to volunteering. I love animals. My volunteer efforts are focused on helping animals and getting them ready for forever homes. It’s gratifying to see them arrive despondent from the shelter and transform to a state of joyfulness by the time they get adopted.”

Dogs often help orchestrate their way to their wonderful adoptive homes, and the events that transpired next were not surprising. Duffy dutifully attended adoption events, but he saved his joyfulness and happy kisses when he returned home to Karen and her roommate, Christine Mason. Christine had previously adopted one of Karen’s foster dogs; a starving pup found on the beach in Mexico she named Mya.

Christine describes what happened next, “Karen left town, and I ended up falling in love with another dog! What was amazing was how my dog Mya and Mario (Duffy’s new name) fell in love too.”

Mya doesn’t like other pups to share her bowls or toys, but she happily shares them with Mario. Mario’s companionship cured Mya of the separation anxiety she used to experience when Christine left the house. Mya and Mario are inseparable, enjoying games by day and sleeping curled up together at night. Christine’s decision to adopt the terrier was an easy one. Christine jokes, “Karen is very good at getting the dogs, and I end up adopting them!”

This story has a “fairy tail” ending for a fabulous pup who climbed his way into his human’s heart. Here we see Duffy riding with Christine in a limousine (he is the dog on the left with his happy ears up). This former escape artist never tries to run away from his wonderful new home.

Head over to the Coachella Valley Animal Campus to meet their wonderful animals. The shelter is located at 72-050 Pet Land Place, Thousand Palms, (760) 343-3644. Adoptable animals can be viewed online at www.rcdas.org. Not ready to adopt? Contact Loving All Animals in Palm Desert at (760) 834-7000 and become a life-saving “Super Hero” foster parent to a shelter dog. With so many snow birds out of town, there is a serious shortage of pet fosters. Maybe one of your friends will adopt!