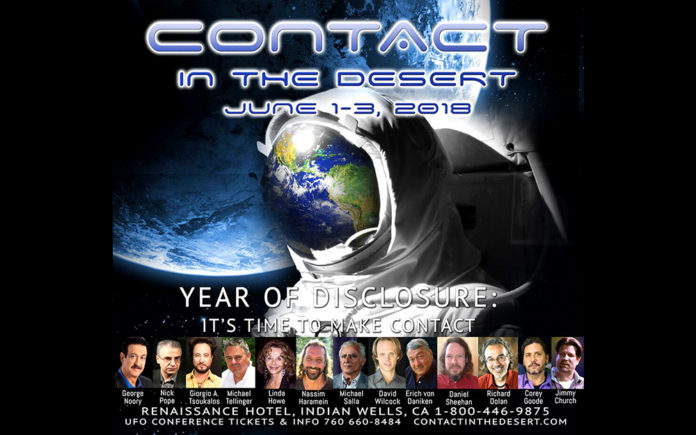 The world’s largest UFO conference, Contact In The Desert, will be held June 1- 4 at the Renaissance Resort and Hotel in Indian Wells.

In its sixth year, the conference outgrew its previous location in Joshua Tree as interest in UFOs flourishes.

Renowned experts include the pioneer in ancient astronaut theory Erich von Däniken, author of Chariots of the Gods; History Channel’s Ancient Aliens star Giorgio A. Tsoukalos, Coast to Coast AM radio host George Noory, and Communion author Whitley Strieber. From FBI, NASA, military, and government officials, to ancient alien researchers and scientists, as well as archeologists and cosmologists, there will be over 50 presenters in the strongest line up ever assembled in the UFO field.

Contact in the Desert celebrates the Coachella Valley area’s rich history of UFO sightings, including an experience of synchronized lights over the Joshua Tree Retreat Center campgrounds, witnessed by over 100 people during the conference in 2015. Indian Wells had its own sightings in 2016 – will there be more unidentified flying objects spotted this year?

Attendees from all over the globe are heading to Indian Wells to be a part of this conversation.  With increased mainstream news coverage on secret space programs and reports of UFOs on the rise, the Contact in the Desert conference promises to be more fascinating than ever.

Weekend passes are $260 single; $470 for couples through May 29, with higher fees at the door. More information at www.contactinthedesert.com