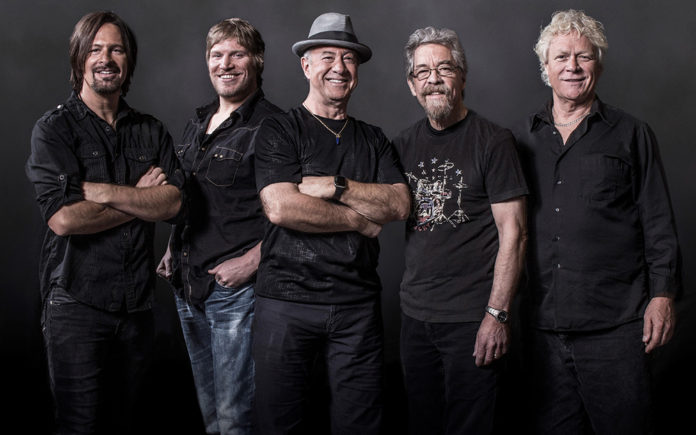 Lifelong friends and former bandmates, Doug Clifford and Stu Cook, formed Creedence Clearwater Revisited in 1995 as a way to reunite and continue to play the songs they loved. Unsure of how this new iteration of Creedence Clearwater Revival would go over and never intending to go fully public, the duo eventually put together a full band and became hugely popular, playing as many as 190 shows a year at one point. Twenty-three years later, they are down to about fifty shows a year, but you can still hear them play your favorite songs, whether it’s “Have You Ever Seen the Rain,” “Proud Mary,” “Born on the Bayou,” “Fortunate Son,” “Down on the Corner,” or…well, you get the idea. Fans can see them play at Fantasy Springs Resort Casino on Saturday, June 16 at 8 pm.

CVW: I read that you grew up with your band member Stu Cook. How did you two start playing music together?

DC: “It’s not really true that we grew up together…because we haven’t grown up yet! I met Stu when I was 13 the first day of school in 7th grade. Our last names start with the same initial, so we were in homeroom together. I sat behind him and we both had our leather jackets on – that was the James Dean look back then. Rock ‘n roll was just fledgling at that point. We talked about music and I told him what was in my record collection and he had the same records in his and from then on we were aligned for future music endeavors. In 8th grade, I met John Fogerty, who was into a lot of music I liked too and we wanted to start a band. Tom Fogerty, who was four years older, was in a band at the time. He had a vision of doing a demo and going to L.A. to get a deal – his band didn’t agree. Tom had always been nice and polite to us – a big contrast to my big brother, who beat me up until I could fight back. Tom came in and recorded a few songs with us and we were thrilled. That’s how it started. Ten years later, we had our first hit when we were 23, with Suzie Q. It was a lot of hard work and staying focused on what we wanted to do. We were playing roots Americana rock ‘n roll in the bay area when psychadelia was all the rage. Lots of people called us “the boy scouts of rock n roll”. I’m ok with that, because last laughs are always good ones.”

CVW: You’ve enjoyed longer and more successful careers in a band than most people could ever hope for – what advice would you give to local musicians starting out, especially in light of music becoming so digital?

DC: “Couple of things: one is show business and the other is the art. The art of what you’re doing – it’s hard to make a living playing music, especially these days. Play what makes you feel good, what makes you happiest. Before we had hits we played in bars and played Top-40 radio hits. We didn’t necessarily want to play some of the songs we were playing but at that level you have to to get a couple bucks. But when you pitch your hat in the ring and want to be yourself, stick with what you like and take it as far as it’ll go. As far as show business goes: Don’t sign anything without a good lawyer.”

CVW: Have the songs evolved over time, the way you perform them?

DC: “Grapevine is like twenty minutes long, so there are a lot of places to throw in little things as long as it makes sense. We don’t put anything in there just for the sake of it, but that doesn’t mean you can’t go off road once in a while. We don’t copy the songs note for note but anything has to make sense at that moment or else we just stick with the groove. The heart of the song and characteristics of each song focus on what the content is and chord changes. You want to stay on that map but there are things you can put in. Those are the guidelines.”

CVW: What is your favorite song to perform?

DC: “My favorite song is Born on the Bayou and I still like playing it. If you want to throw something extra in there that’s the song to do it.”

CVW: After decades of touring, what do you do to keep the shows just as energetic and crowd-pleasing as they’ve always been?

DC: “We have an order. This is our 23rd year with this particular project. We love these songs, they are the heart and soul of what we do. When I don’t enjoy playing these songs I’ll do something else. During a show, we’ll be surprised about the songs people forgot we did and still love. They’re at our show to have a good time and we’re there to provide it. When we succeed, it’s a good feeling, having an effect on millions of people’s lives. It’s a gift. We now have three generations coming to our show. I have to pinch myself sometimes.”

To purchase tickets to Creedence Clearwater Revisited, go to: http://www.fantasyspringsresort.com/prod/entertain/entertain.php#ccr