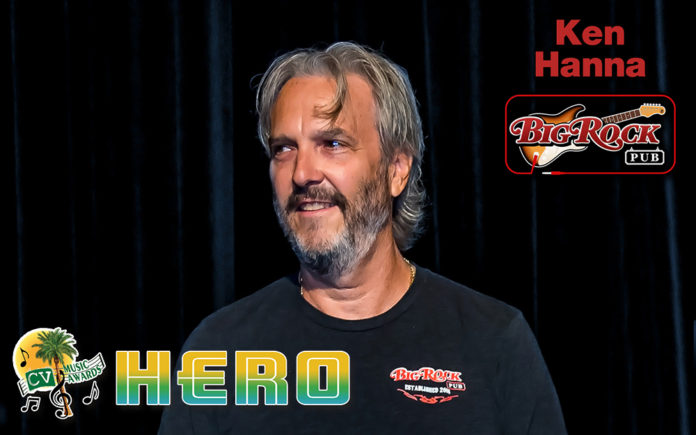 At CV Weekly, we live and breathe music and entertainment. In that arena, we have many heroes those we admire for their raw talent, their ability to make us feel, their selflessness in giving themselves to their craft. After an electrical outage at the Riviera Palm Springs derailed the original CV Weekly Music Awards on June 4, countless hours of time, effort, and advertising dollars were squandered by events completely out of our control. In order to regroup and make this ever-growing event happen, what we needed were heroes. One of our personal CV Music Awards Heroes is Ken Hanna, owner of Big Rock Pub and Indian Springs Golf Club in Indio and founder of CDS Group of Companies. We took some time to talk to Ken about his business, his interest in music, and his help in making the rescheduled CV Weekly Music Awards come together.

Ken founded and runs a successful food warehousing business in Canada, where he’s based in Richmond, B.C. His company, CDS Group of Companies, distributes frozen and dried food products all over Western Canada. Aside from food warehousing and distribution, Ken has a transportation company he uses to ship said food products as well as export meat out of the country. Aside from this, he also owns and runs Indian Springs Golf Club, highly rated by Golf Digest and The Desert Sun (among others) as one of the top golf spots in the Coachella Valley and Big Rock Pub, the new exciting venue for music, delicious and cleverly-named dishes (Fleetwood Mac and Cheese and Sympathy for the Devil-ed Eggs, to name just a witty few). This savvy business owner had to work his way to the top. He started from nothing in 1995 as a piano mover. Through hard work, innovative thinking, and perseverance, he now travels back and forth between Canada and Indio to run his businesses, which employ several hundred. When asked what he feels has made his businesses a success, Ken’s answer was simple. A mixture of excellent customer service, going beyond the call of duty and most importantly, treating his staff with respect is what drives Ken’s businesses. Ken said, I never ask my staff to do something I wouldn’t do. They enjoy the work they do and in turn, they do a good job for us and for our customers. That makes our customers feel wanted and supported and further drives our success.

What originally brought Ken from the Great White North to the perpetually sunny desert? In 1996, he attended a convention in Palm Springs and liked it here so much that he would venture down here often and eventually buy a house in Indian Springs in 2010. He loved Indian Springs, but kept wondering if there were a different way to run it more efficiently. In 2014, he purchased the golf course and ran it as is. He saw a vision for the pub and golf club to work together and in two years time, finished all the renovations and thus, Big Rock Pub was born. He had recently finished doing renovations to his house in Canada and made the Pub a carbon copy of his house, down to the furnishings on the walls.

“I just saw the vision and thought there was an opportunity to do something different. I never necessarily wanted to run a golf course or a pub, but it’s worked out well. It’s a new concept and I’ve had some celebrities come in in the rock n roll world and give me high fives, which has been very rewarding.”

Ken is excited about the future of Big Rock Pub. I certainly want to get the kinks out. There are a lot of exciting projects coming down the pipe. We’re looking at more live events, more celebrity appearances, celebrity golf tournaments. We will continue to grow that piece.  Ken’s been asked to open up other Big Rock Pubs in other parts of the country. People love the concept. Understandably.

Ken’s passion for rock n’ roll and its memorabilia developed at an early age. He describes himself as a lifetime music fanatic. He took lessons as a child, but nothing ever panned out, so he now admires instruments although he doesn’t play any. One of his good friends is the biggest memorabilia dealer in the world and that has certainly influences how many pieces he owns. These pieces number over 100, including prized memorabilia from Jim Hendrix and Eric Clapton. He has more, he tells me, that he hasn’t had a chance to put up yet. He accepts no help when hanging memorabilia up at Big Rock Pub. All 100 pieces have been hung by Ken Hanna himself before the Pub opened and he hangs any new pieces up after hours, sometimes staying until 2 am for this labor of love. When asked why he doesn’t delegate this duty to any of his employees, he states that as the Pub is a replica of his Canadian home, he knows best where they all should go. During Desert Trip, Coachella, and Stagecoach, Ken donated guitars to be auctioned off with all proceeds going to Desert Cancer Foundation. All told, the guitars raised about $40,000 for cancer care and Ken couldn’t be happier to do that for the organization. He recently lost his brother to cancer and loves being able to combine a passion with a charity close to his heart. The money goes to making sure people get treatment and it’s just an awesome way to give back to the community. I’ve been able to get memorabilia down to a price people can afford, so it feels good to make these great pieces accessible for fans.

When asked how he juggles a busy business life and his family, Ken claims he’s a master of delegation. While he does work a lot, he blocks weekends off for family time. Says Ken, “My wife and daughter are pretty cool about understanding. We take vacations and I turn my phone off. But I enjoy what I do and they know that. It’s all about balance. As long as I have great staff that can handle things when I’m not around. I delegate as much as I can. Right now things are running quite well in Vancouver.”

Asked why he felt compelled to further contribute as a CV Music Awards “Hero” even though he was already a Title sponsor, Ken responded, “Well, you know what… I mean there’s not too many magazines like them and they had a tough go of their last awards ceremony a month or so ago and I felt bad for what happened. They’re big supporters of Big Rock Pub. They’re a one and only and we’re a one and only. I definitely felt bad about what went down with the power outage. I felt that I wanted to do that for them.”  In parting, Ken wanted to thank Tracy (Dietlin) for all of her support of the Pub, Lisa Morgan (Chief Business Development Officer at Big Rock Pub and Indian Springs Golf Club) for all of her hard work and for everything she does for the company, and to let people know they are hiring a new food and beverage manager and to look for great things from Big Rock Pub as they grow and get better and better.

We at CV Weekly, local musicians, and all attendees of the CV Music Awards surely appreciate Ken’s kindness and generosity. We look forward to what’s to come from Ken Hanna and his fantastic Pub.