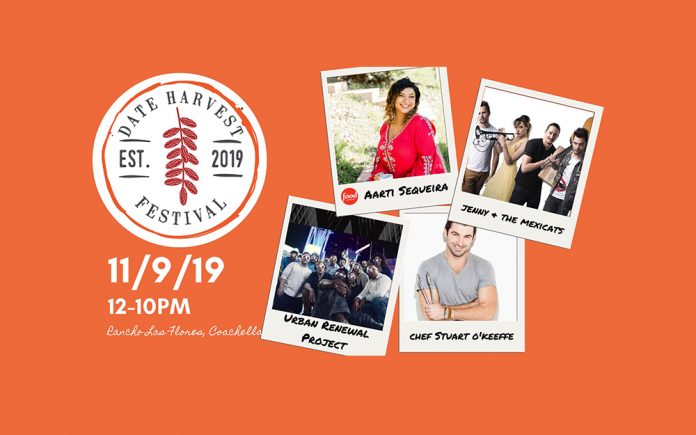 People called them crazy since the day they said they wanted to throw another festival in the valley known for festivals. But when you are as passionate as they are about introducing people to dates, you throw caution to the wind and go for it. Enter the inaugural Date Harvest Festival, a celebration honoring the Coachella Valley’s incredible date industry with food, live music from Jenny & The Mexicats and many more! There will be dates of all shapes, sizes, and flavors. Fun for the whole family! The event is scheduled from noon to 10 pm on Saturday, November 9, 2019 at the Rancho Las Flores Event Venue in the city of Coachella. Tickets are $20. Military veterans are FREE with ID and kids under 12 are FREE. You can still purchase tickets at dateharvest.com.

The California Date Commission, the title sponsor, works on behalf of all date producers within the Coachella Valley to oversee the quality development of dates and date products; provides field and nutrition research, regulatory support and generic marketing promotion. The Coachella Valley is the leading producer of dates in the United States. More than 70 million pounds of dates are grown in this international destination resort area in Southern California’s desert region. Dates require special environmental conditions to produce fruit; hot, arid weather but plenty of ground water. Therefore, dates can only be grown in a few places in the United States. Coachella Valley has the ideal environment.

A large draw of the festival is its music line-up. Here’s what’s coming your way!

Jenny and the Mexicats, whose name is a nod to the common way of calling the locals ‘cats’ and the Mexican origin of two of their members, mix Jazz, Rockabilly, Folk, Flamenco and Reggae rhythms. Their themes jump from one style to another with a seemingly impossible naturalness. First, you’re in the square of Garibaldi, now in a flamenco tablao in Spain, and suddenly, you’re on a beach in Jamaica. Jenny and the Mexicats is a musical journey that shows us that there are no borders when it comes to music. There are also no labels and no prejudices.

Jenny began playing the trumpet at age 7 and began singing at 15, while teaching herself to play the guitar. Playing both in Jazz and Classical bands as well as orchestras most of her life, she had an ear and a love for music. A fusion of nationalities and personalities, the band’s story is a little unusual and more of an accidental occurrence rather than a planned adventure.

Jenny & The Mexicats began life as Pachucos y la Princesa in June 2008, when Jenny was invited to Spain by Icho who she had met two years previously while touring Madrid. In search of something new, Jenny fell right into place in Spain, decided she wanted to call it home and set about starting a band. Icho contacted the best guitar player he knew, Pantera, a flamenco guitarist, whom Icho had known all his life and was in previous bands with, including a Rockabilly band in Spain. The closest thing to a drummer they could find was David, a Spanish cajon player extraordinaire, whom Pantera had played with in a Flamenco band. Thrown together in the midst of an English girl’s urge for adventure, Jenny & The Mexicats were born.

They just released their fourth studio album Fiesta Ancestral which is the evolution of their journey through music and the places they have visited around the world which allows them this new story to tell. Listen to “Sonido de Tu Voz (The Sound of Your Voice” an upbeat dance tune that references being away from loved ones and ties in all the elements that have brought Jenny and The Mexicats this far. “I miss the sound of your voice, … when you arrive, my heart fills and it is empty if you leave.” Also listen to “La Oportunidad (The Opportunity)” a slower tempo and chunky cumbia jam that sings to heartbreak; that heartbreak that comes after having given time and another opportunity to fail.

Jamie O’Neal is an Australian platinum-selling Country singer and songwriter that became a household name in 2000 with her back-to-back #1 singles, “There Is No Arizona” and “When I Think About Angels.” With multiple hits that followed, including “Shiver,” “Trying To Find Atlantis” and “Somebody’s Hero,” O’Neal was on fire.

She has earned multiple Grammy nominations, won Academy of Country Music and Billboard Awards and appeared on the national television shows Access Hollywood, Entertainment Tonight, The Tonight Show with Jay Leno, Late Night with David Letterman among many others.

While she has penned most of the songs for her own albums, O’Neal has also written hits for such notable artists as Reba McEntire, Martina McBride, Leann Rimes, Cece Winans and Idina Menzel, among others. O’Neal has toured with Reba McEntire, Keith Urban, and Kylie Minogue.

Her voice can be heard internationally in major motion pictures including Bridget Jones’s Diary, on ABC’s Desperate Housewives and in commercials.

O’Neal gained heightened industry respect when she was chosen by producers as they searched country music for its most powerful vocalist to perform in place of Celine Dion in a major motion picture film. She was then once again selected to perform with Carrie Underwood when she won American Idol and needed the perfect duet partner to introduce her to the Country music world. Their duet of “Does He Love You” made the list of CMT’s 100 Greatest Duets.

The Urban Renewal Project is a Los Angeles-based forward thinking, new kind of funky fusion that incorporates Traditional Jazz, Big Band, Hip-Hop, Pop Rhythm and Blues and Soul. It includes a lot of great musicians throwing down some great music in a really contemporary and new way. Their message is to be ‘real’ ‘raw’ and ‘organic’ and to help you look at what’s happening around you and the life you may be missing out on. They ask you to step away from your path and focus on our humanity and what makes us unique so that we may experience each other.

Their shows are a society themselves with upwards of 15 people sweating on stage cranking out music at full blast for 60 minutes non-stop. It’s become a family and a home. They infuse a lot of hope in the music and the premise that you never really know what’s there until you jump.

The group features a Big Band horn section, a singer and a rapper who perform upbeat originals and fresh interpretations of everything from Jazz standards to recent hits. They’ve toured nationally from New York to the San Jose, and their recordings have received airplay on taste-making radio stations across the country.

Omar Offendum is a Syrian-American rapper/spoken word artist living in Los Angeles. Known for his unique blend of Hip-Hop and Arabic poetry, he’s been featured on prominent world news outlets, lectured at a number of prestigious academic institutions, collaborated with major museums and cultural organizations, and helped raise millions of dollars for various humanitarian relief groups. A graduate of the University of Virginia’s School of Architecture, he’s been able to carve a distinct path for himself as a thoughtful entertainer/activist able to speak to a multitude of relevant issues and diverse global audiences over the course of his decade-long career. Offendum was recently named a Kennedy Center Citizen Artist Fellow for 2018-2019.

One thing DHF founder Mark Tadros wanted to incorporate was local musicians who also happen to be veterans. Martin Barrera, guitarist for La Quinta-based Rock and Roll band 5th Town, is a veteran of the Army and will be performing along with his bandmates Chelsea Sugarbritches and Linda Lemke Heinz. Also a United States Army veteran, singer/songwriter Richard Finn from Joshua Tree will be kicking-off the musical festivities at 1 p.m.