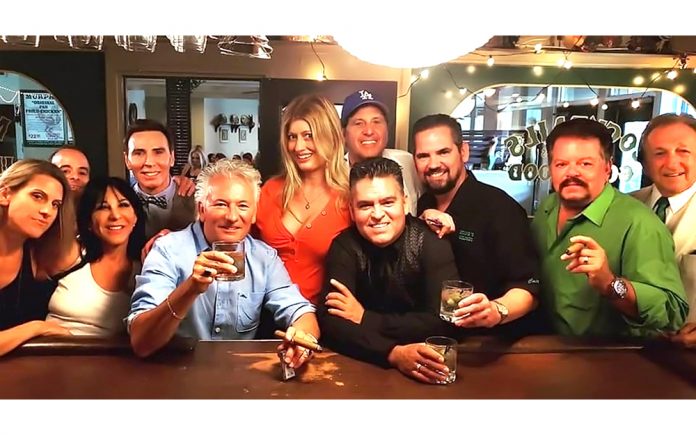 The Coachella Valley has been home to an assortment of film projects and shoots throughout the years, and adding to that list is the currently-in-production web series sitcom, Mark’s Place, directed, produced, and written by Sonny Vellozzi. The plot follows an Italian hit man from Chicago who relocates with the help of The Witness Protection Program to Palm Springs to open up an Irish Pub. Antics ensue with a comical cast of characters and situations.

Vellozzi has been in the entertainment business for 20 years—lending his hand to various projects for television, radio, and film. Whether as an actor, writer, or director, he has always exhibited a passion for filmmaking, even as he and his wife moved from Philadelphia 14 months ago.

Mark’s Place was a project that came about after Vellozzi had co-written a script that took place in Joshua Tree called Desert Dick, a comedy centering on a ranger in the famous National Park. While so far only being able to accumulate half of the budget needed for the film, Vellozzi started to pen the script for Mark’s Place, having experience in the web series medium by previously working on the comedy series Finders Keepers a few years ago.

“While working on Finders Keepers in Philadelphia, I had variety of actors and crew members at my disposal. The film community in Philadelphia is very collaborative and open to working together on projects. When I moved to Palm Springs, I knew it wouldn’t be feasible to have those actors come in on this project, so I made it a very local project,” said Vellozzi.

In regards to Vellozzi’s inspiration while creating the concept for Mark’s Place, he found the shared similarity of feeling like a fish out of water in a new location to be the driving force of the narrative.

“Philly is a place where people mostly stay, but in Palm Springs, it was an entirely different experience for me. You have people from all over—Canada, Chicago, or Seattle—and writing the script, I just kept thinking how I was feeling as an Italian American guy from South Philly. It’s an entirely different vibe than what I was used to. It kind of felt like I was in the Witness Protection Program in a way,” explained Vellozzi.

The casting process for Mark’s Place involved Vellozzi networking with a group of Palm Springs-based actors through Facebook, even before moving to the Coachella Valley. It was through there he was able to find the right people to portray the characters, including Marcus Lantero who plays the title character of Mark, and Domingo Winstead, who plays the character of Billy Stogden, one of the first Palm Springs actors he came in contact with on Facebook.

“When I’m casting for a project, not only do I choose from professionals I’ve worked with before, but I also try to just pick people I know in real life who I think would be great for the part. If I think they can bring something really special to a character or if they’re naturally funny, I’ll ask them to memorize a few lines or improvise to see if we can get something going,” stated Vellozzi.

The humor found in Mark’s Place implements the same style of dry humor found in some of Vellozzi’s favorite shows like Seinfeld and Curb Your Enthusiasm, while also integrating some elements of dark humor found in The Sopranos.

“As far as drama goes, I’m a big fan of Martin Scorsese and Brian De Palma. I’d also have to say that Robert De Niro and Al Pacino are my favorite actors, so if I was ever stuck on a deserted island with all their movies to tide me over, I’d be fine with that,” revealed Vellozzi.

The cast and crew of Mark’s Place have been dedicated to the project and are looking forward to showcasing the local acting and film talent in the Coachella Valley to audiences worldwide.

“Anytime we as actors get in front of the camera, we always just try to have fun and put our best efforts towards a project. I’m really proud of Mark’s Place and the people I worked with. I think audiences are really going to enjoy it,” stated Domingo Winstead, who plays an undercover FBI agent posing as the manager of Mark’s Place.

Mark’s Place is expected to have six episodes in the first season with an anticipated release date towards the end of January of next year on Amazon Prime Video.