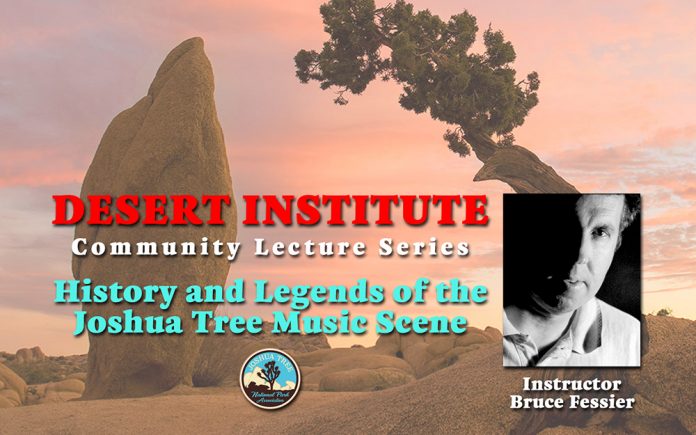 The Joshua Tree area has attracted spiritual-seeking musicians, singers and songwriters since the 1940s, or less than a decade after President Roosevelt established the Joshua Tree National Monument. Songwriters Hall of Famer Allie Wrubel wrote the Andrews Sisters hit, “The Lady From 29 Palms,” in his Twentynine Palms home near where Paramahansa Yogananda was writing his influential “Autobiography of a Yogi” in 1947.

Bruce Fessier first visited the Twentynine Palms Inn at one-month old in 1953 and his family has owned a house in Joshua Tree since 1958. He’s chronicled the Joshua Tree music scene since 1981, when he moved there in hopes of meeting the town’s most famous resident, the English troubadour, Donovan.

In his class, Bruce will explore the music scene’s origins and share stories of how psychedelic experiences in the high desert not only shaped pop culture, but led to a vibrant scene including music festivals, famous recording sessions and a lounge named after Donovan’s 2004 LP, “Beat Café,” where an open mic night was heard internationally via Internet radio, inspiring a documentary of the influential but seemingly invisible Joshua Tree music scene titled “Nowhere Now.” In addition to the story-telling, Bruce will share a playlist of music recorded by integral participants in the Joshua Tree music scene and lead a caravan car tour of important sites, including the home of the Joshua Tree Music Festival, the hotel where Parsons died and Donovan stayed, and a studio where the high desert sound was recorded.