Having just dropped their new EP, Setting Sail, this past April, these Coachella Valley Music Award nominees are starting to book shows out of town and aren’t looking to slow down anytime soon. On the contrary, this duo is among the most ambitious local artists I have the pleasure of knowing. Relatively new to the scene, anyone who spends any amount of time with the Palm Springs based duo knows they are passionate performers who have an eye on the prize and are willing to hustle for their craft.

Featuring LBOOGIEDAMANN, A.K.A. LaRon Tremaine Williams, and Zack No Slack, A.K.A. Zack Siefker, I first encountered the duo earlier this year when they were performing downtown Palm Springs and I was immediately drawn in by their lyricism and track choices. I later found out that Desert Pirates are not only talented performers, but two of the most genuine and sincerely nice guys you could meet. Humble in nature, yet confident about their music…I dare you not to like these guys.

CV Weekly: How did you guys meet and start making music together? 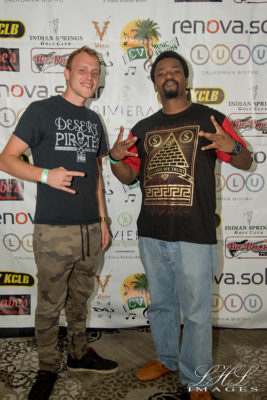 Zack No Slack: “I was working at Starbucks at the time and he would come in and we would talk about music and hit it off. A couple of smoke sessions later we were discussing making music together.”

LBOOGIEDAMANN: “Yeah, basically I was a regular customer and would go in and tell Zack about upcoming shows I had going on and he could never attend because he always had to work and what happened was…”

Zack No Slack interjects: “And what happened was that I got fired. And then I was like…Okay, it’s time to do this.”

LBOOGIEDAMANN: (Laughing)”Truth be told, I got fired from my last job as well and it was for the dumbest reason. At that point when all you have is time you start realizing that things happen the way they do for a reason so we decided to put all our efforts into making this project successful. I had been making music for years and had a couple of previous projects I had been working on. Zack and I were hanging out blazing and he told me he had a rough recording of a song that he had written. I heard it and said, ‘Hey that’s hot, why don’t we re-record that?’ Then he let me know that he no longer had access to the beat and I was like, ‘Okay, let’s get a fresh beat and make a new recording.’ Which we did and that was, “Mad Bitches” and it’s featured on our new EP.”

Zack No Slack: “Pretty much everyone I ran into who said they wanted to make music, or record or whatever, never seemed to put any real effort into making anything happen. We decided to go in together on some recording time and I was like, ‘Hey why just record a song or two? We might as well put together an EP’ and here we are. Seeing as how we both realized that we were equally as dedicated, it made sense.”

You can see Desert Pirates this Friday, August 11th at The Hood Bar and Pizza in Palm Desert and they will be at The Airliner Club in Los Angeles on Sat, August 12th.