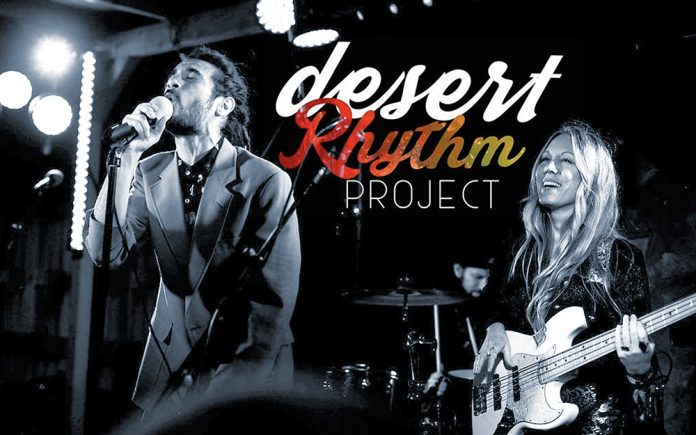 Desert Rhythm Project is a Neo-Roots, Reggae, Funk, Soul band from California’s Mojave Desert. They are as deviated from the norm as an artist can get. Michael Reyes’ dynamic presence on lead vocals and guitar is reminiscent of the soulful and energetic James Brown combined with the ethereal appreciative consciousness of Reggae legend Bob Marley. Bryanna Evaro’s timeless velvety Folk-Roots presence on bass guitar and vocals lends herself as the crowning essential counterpart of this celebrated divine duo. These desert natives have created their own unique style comprised of soulful harmonies, effortless melodic guitar techniques and smooth elemental bass rhythms. They have built a movement from the ground up and they have done it over an extended period of time and at their own velocity. In doing so, the band can virtually play any show, venue or festival they desire. The 2018 complete and flawless album Mojave Roots is a sublime segue to new music coming in 2020.

The band will be performing, along with BLIMES and VIAA at Gadi’s Bar and Grill in Yucca Valley, California on Saturday, February 15, 2020. They will also be debuting their highly anticipated new single and video for the song “Stay” on February 21st at Furstworld under the desert stars in Joshua Tree, CA. Evaro shared, “Before we release the song and video on all major platforms, we’d love to share in the excitement with all our loyal supporters, friends, and family by inviting you to pre-screen the video, before everyone else!”

The song will be officially released on February 22, 2020 and is the first single from the duo’s upcoming EP which primarily focuses on the feminine mystique of bassist Evaro. The duo released the four-disc album Seasons in 2019 as a solo project under lead vocalist Reyes, but this is the first single the band has released since Mojave Roots. “The last few months, we have been tirelessly working on this highly anticipated new single and are over-the-moon ecstatic to finally be able to share it with you! Evaro shared excitingly. Along with the new single coming out in February our new EP will be out in the months to follow. We are looking forward to getting on the road this summer and hittin’ the ground running!” Evaro shared.

“Stay” is an exciting release for many reasons and predominantly because it focuses on the creative direction and vocal stylings of Evaro. Sonically layered with lush harmonies and haunting melodies “Stay” will take listeners and viewers alike on a journey through disturbed vulnerability.

Backed by the talented, world-class trombone player Scott Kisinger, this high-energy Reggae, Funk band is a force to be reckoned with.