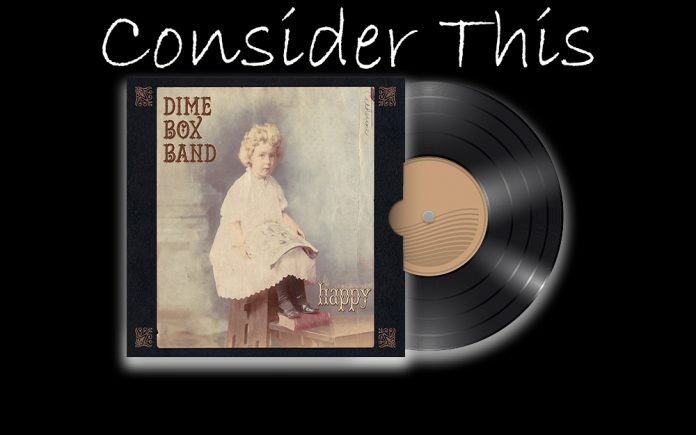 That tart declaration of independence can be found on “Going My Way” from the new album by the Dime Box Band. The five-piece, fronted by Kristi Callan, has been quietly creating fresh music for nearly a decade.

Kristi Callan has been a part of the Los Angeles music scene for…ever. Back in the early ‘80s she and her sister Kelli formed Wednesday Week with Heidi Rodewald and David Nolte. Although they took their name from a song by Irish Punk Rockers the Undertones, their music crossed musical boundaries. Their sound, sandwiching somewhere between the Garage Pop of The Bangles and the Country flavor of Lone Justice.

Signed to the indie label, Enigma, the band recorded a couple of well-received albums and one of their songs was featured in the camp Horror classic, “Slumber Party Massacre II.” Unfortunately, the myopic music industry could never look past the Go-Go’s and The Bangles to make room for Wednesday Week.

By the early ‘90s most of the original line-up reconfigured as Lucky, they made an underrated album entitled Live A Little before disbanding. Since then Kristi has made music with everyone from the Cruzados, the Wondermints, David Gray and Dave Davies of the Kinks. She’s also released solo music and even fronted an all-female Cheap Trick tribute band, Cheap Chick.

The first incarnation of Dime Box Band included Kristi and her husband, David Nolte, following a 10-year pause, Kristi pushed play again at the beginning of the 21st century. A completely distaff version released Five And Dime Waltz in 2008. The album garnered critical acclaim and the band cultivated a loyal fan base. Unfortunately, not every member was able to fully commit, so by 2010, Kristi was back to square one.

Luckily, she connected with multi-instrumentalist Lyn Bertles (their kids took Ninjitsu together), Lyn and her husband, Nick Vincent, became the nucleus of the band. Both have lengthy musical rap sheets and have played with a cornucopia of cool artists, including Rob Laufer, The Continental Drifters, Tito and Tarantula, plus John Fogerty, Art Garfunkel and Frank Black. Dime Box Band

became even more of a family affair when Kristi drafted her son James for lead guitar and vocals duties, while Lyn and Nick enlisted their son Alex to play bass and cello. Together, they have recorded the second official Dime Box Band long-player, entitled Happy.

The album opens the one-two punch of “All Of Nothing” and “As The Crow Flies.” “All…” is something of a jangly hoedown powered by ringing guitars, brawny bass lines, keening violin and a breakneck beat. Sweet harmonies wrap around lyrics that limn the uncertainty that comes with gauging mutual attraction; “I don’t want to say the first word, I don’t wanna look like I need, it’d be so easy if you spoke first, then I could casually agree/But you might laugh, then you might leave, but then again-maybe you need me.” Even as the lyrics speak to what Jimi Hendrix once dubbed “Love Or Confusion,” the instrumental prowess, buoyed by swooping strings and muscular guitar, undercuts the diffidence.

“….Crow” is a blend of brushed percussion, rippling mandolin, angular guitar riffs, serrated bass, muted keys and a rattle-trap rhythm. The iridescent instrumentation is matched by Kristi’s winsome vocals. The lyrics note if you bypass the hard stuff in life, you’re missing the point;  “…The road is long, it dips and winds, you’ll take a wrong turn and lose some time/Cause it’s well-worn, but not well marked, and all the shortcuts take you back to the start.”

Mark Twain famously said “Write what you know,” and the best songwriters take that dictum to heart. Several songs here either come from firsthand experiences or real-life events. There’s a heartbreaking specificity to the lyrics of “Butterflies.” Over sawing violin, swirly keys, willowy guitars and a tick-tock rhythm, Kristi tenderly pays homage to a pal who lost her battle with ALS; someone who “had a way of making boring things cool.” Even in her absence, her presence is clearly felt; “Your two kids, all the things that you did, you are the memories you left behind, all the things that you said are stuck in my head.”

There’s a bit of a cowpoke groove to “Spilt Milk,” which is propelled by, loping guitars, languid bass, shimmery keys and a hop-a-long beat. The lyrics unspool a litany Kardashian-size concerns; “I’m not thin enough, I’m not rich enough, pretty enough, smart enough for you/I haven’t done enough, I’ve wasted time, I should have been workin’, not sitting and cryin.” The brittle violin solo on the break leads to an epiphany; “Life’s too short to have no commitments.”

Both “Happy” and “What Went Wrong” offer wry observations that feel up close and personal.  The former is a bit of a back-porch ramble, anchored by ricocheting guitars, mandolin and fiddle accents, bucolic banjo notes and a caroming beat. The sprightly arrangement nearly camouflages the lyrics’ earnest advice; “Might as well just be happy, no matter what comes cause trouble and changes don’t stop for anyone/Just smile through the tears, cause one thing’s for sure, nothing lasts.”

The latter examines that moment in a marriage when passion and attraction give way to apathy and familiarity. Chiming guitars, swooning violin, high lonesome pedal steel and wily bass lines are tethered to a galloping gait. The lyrics wonder why it all slipped away; “Was it the bills-was it the kids? Maybe just that old reality setting in/Getting older-dreams not coming true, losing that wonder just does something to you.” Violin and guitar enact a tender pas de deux on the break, trying to recapture the magic.

On an album packed with great songs, three tracks stand out: the aforementioned “Going My Way” weds buzz-saw guitar riffs, rollicking piano, fluttery violin and gritty vocals to a Bo Diddley beat. When well-meaning busybodies offer unsolicited guidance, the Dime Box Band graciously demurs; “Everyone’s giving me advice, I don’t ask but I get it anyway/Seems they know how to run my life, I just smile and keep going my way.”

On a couple of songs, the political becomes personal. “Keystone” is a bitter broadside against the controversial pipeline project that runs roughly from Canada to Texas, tearing up private property in the name of progress. Over shuddery guitars, ticklish keys and a rattlesnake shake rhythm, the opening couplet says it all; “They tore a hole through my Daddy’s land, to make way for the tar sands, splintered trees, mangled roots/Blood red soil caked on my boots, it ain’t right, we gotta fight.” Decrying corporate avarice and eminent domain, the chorus extrapolates a bit of “This Land Is Your Land,” flipping the script on Woody Guthrie’s populist anthem.

“Close Your Eyes” is a lilting charmer, written in ¾ time. Plaintive piano connects stutter-y guitars, thrumming bass, swiveling violin and understated percussion. The lyrics place a parent between a rock and a hard place when confronted by the homeless epidemic; “Close your eyes walk away, there’s nothing that you can do anyway/Keep to yourself, don’t get involved, it’s always been this way.”

Other interesting tracks include the sparkling quickstep of “Detour,” and the liquid luck of “Felix Felicis.” The album closes with “Everybody Lies.” If Oingo Boingo had ever collaborated with The Carter Family, it might sound something like this. Girl Group harmonies lattice over rubbery bass lines, stripped-down guitars and an elastic beat. Smart(ass) lyrics take on the sin of social hypocrisy, but ultimately concede; “You don’t have to lie to me, I can take the truth/But only if you tell me what I want to hear.”

The Dime Box band received some musical assists from a wolfpack of talented players including Ana Callan and Lisa Jenio on vocals, Judy Cocuzza on drums, Matthew Downs on pedal steel, Doug Freeman and Nancy Luca on lead guitar, Probyn Gregory on banjo, Danny McGough on accordion, North Vincent on trumpet and David Nolte on bass, electric guitar and piano. Legendary producer Earle Mankey (essentially the Phil Spector of early ‘80s L.A., he got his start with Pop provocateurs, Sparks), acted as an arranger on “Happy.”

Happy is the perfect name for this record, as the Dime Box Band evince a feeling of beatitude across all 12 tracks presented here. Sweet and tart sounds are tempered by astute lyrics and razor-sharp production. Homespun, sophisticated, heartfelt and funny, Happy makes a joyful noise.