Movie production has ground to a halt and theaters are shuttered.  Enjoying movies on the big neighborhood screens are no longer our shared community experience and it’s all for our own good.  Or so the experts say.  So what’s a movie buff to do?  Already streaming of pandemic themed movies like “Contagion,” “Outbreak” and “28 Days later” and has dramatically spiked.  But there’s another category of movies that are supremely relevant and perhaps even helpful during our times of enforced (coming soon?) isolation. 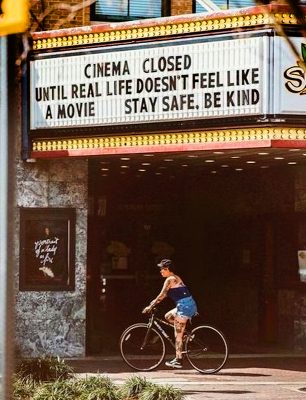 Consider the movie posters on this page as a suggestion for films about the dangers, and opportunities potentially inherent in some circumstance of human isolation.  Many of these see-worthy movies can be found on various streaming platforms for purchase or rental.

If this pandemic with its ominous predictions is indeed an existential crisis, than why not make the best of it with a few (less than 50 please) friends and a new, unseen or favorite movie?

Or, for something a little different, you might enjoy streaming a Shakespeare play recorded at London’s Globe Theater.  Go to: thelondonist.com

Stanley Kubrick’s masterful horror flick was not liked by author Stephen King.  But there’s no doubt that it took the notion of “cabin fever” to new heights.

In John Frankenheimer’s iconic and ironic film, Burt Lancaster plays Robert Stroud, a convicted murderer who became a recognized ornithology expert after caring for an injured sparrow that he rescued in his prison cell.

Is it better to confront an alien creature in a remote place with colleagues, even if everyone’s not on the same page?  Is knowledge more important than survival?

Tom Hardy is the only face on screen as he makes a series of phone from calls from his car while driving across the country his car that could radically change his life before he reaches his destination.

A lonely man is haunted by the suicide of his apartment’s previous tenant.

Imagine being isolated with only a very smart computer as a companion.  CERI, ALEXA are you paying attention?

Sam Rockwell is an astronaut miner on the far side of the moon completing his three-year contract who sees and hears strange things.  This is a brilliant examination of isolation with all its attendant paranoia and existential angst.

Billy Wilder’s recreation of “Lucky Lindy’s” trans-Atlantic solo flight stars a wonderful James Stewart as a determined, humble and heroic Lindbergh.  The isolation of the flight is palpable.  Especially when the fly starts buzzing the cockpit.

In Alfred Hitchcock’s wartime survival drama, a handful of British and Americans are stuck in a lifeboat in the dangerous North Atlantic after their ship is sunk by a U-boat.  Now they must find a way to survive each other, the sea and and the nearby enemy.

Now, go wash your hands and watch a movie.  It’s the safest way to face our collective fears and pass the time we have left until we get an all clear signal from our alleged authorities in-the-know.  Make America well again.

What are you favorite self-isolation movies?