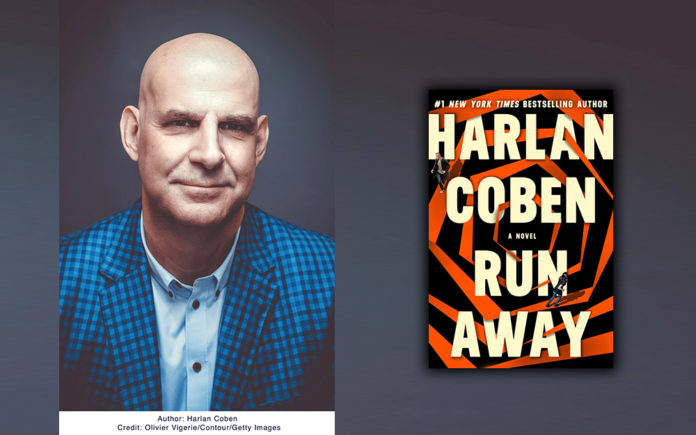 As a parent, there is nearly nothing we wouldn’t do to help or protect our children.  In Harlan Coben’s Run Away (Grand Central, 371 pages), one parent crosses an unthinkable line to free their first-born.

The story begins with Simon Greene, a father desperate to find his daughter, Paige.  For reasons he does not know, she dropped out of college and became a junkie.  Now, he has a tip that she has been seen singing for money in Central Park.  When he tries to rescue his emaciated, drug addled girl, he is thwarted by her vicious boyfriend.

Weeks later, the boyfriend is found murdered and Paige has gone missing.  The police suspect the killer may be either Simon or Paige.

Meanwhile, private detective and former FBI agent Elena Ramirez is searching for a missing young man who seems to be connected to the missing girl’s boyfriend.  More men are murdered, and Simon and Elena team up in hope to cover more ground to find the missing kids.

It seems the common denominator is the victims were all adopted.  But how does Paige fit in?  Is she not Simon’s blood daughter?

Run Away is about a family torn apart after a traumatic event, which is kept secret and a father who is frantic to bring his family back together.

Drug addiction is a serious dilemma for any family, as it robs not only the life of the addicted, but those who love them.  Getting a loved one into treatment can be very difficult and there are no guarantees.

Author Coben is a global bestseller.  He does a great job with action and his violence is intense.  Coben’s stories always move quickly and there are twists and turns that keep a reader searching for who done it.

Run Away explores the phenomenon of inexpensive and easily available DNA ancestry testing.  Where once an adopted child could remain a secret, now a simple test can reveal parents and siblings.  There is a significant data bank of DNA, where crime solvers can now go to find suspects or at the very least their relatives.

I loved this idea in the book and found the ancestry information fascinating.  The premise that someone is killing off half-siblings so that no claims could be made on an estate could be feasible but is extreme — although not implausible.

There is a cult in the book that also provided stimulating ideas about what we believe and how we choose to follow those who claim to have “The Truth.”  Ironically, the murderers have the most thought-provoking conversations as they blithely go about killing those on their hit list.

Coben is always full of surprises and never hesitates to kill off a likeable character.  I really appreciated the energy of the private detective and never saw her fate coming.  I was hoping PI Ramirez would some day get her own literary series.

But, one of the beautiful things about Coben, he is a storyteller first and not bound by popular serial characters.  This adds a great deal to the mystery of his stories because at any moment someone may die – and that makes reading Coben really fun.

I thought it was interesting that Coben decided to separate the title into two words as opposed to runaway (intentional? or merely cover design?)

The father, Simon, beats himself up for not being a better dad.  He’s a high-powered successful money manager but not a great head-of-household.  He scrutinizes his parenting skill and weakness punishing himself for not being able to set his family right.  As he pursues his daughter, he realizes Paige is not a runaway, but he has run away from being an engaged father  — until now.

There is no instruction book for parenting.  It may be one of the most challenging roles on the planet.  All we can hope for is that we do more good than harm to the ones we love most.