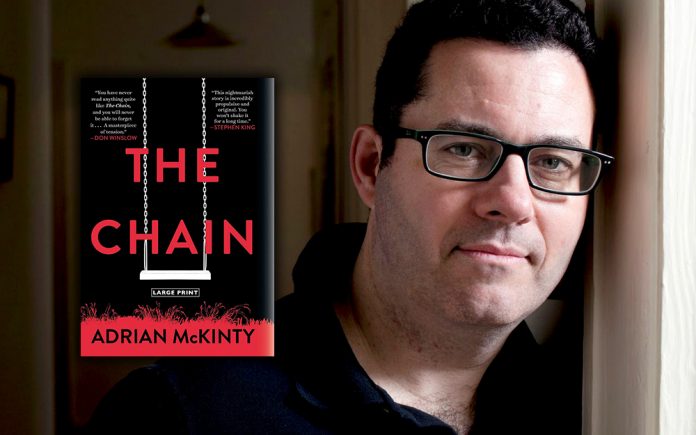 Is there anything a parent wouldn’t do to try and save the life of his or her child?  How far would you go to help your son or daughter?  In Adrian McKinty’s The Chain (Mulholland Books, 359 pages) a mother must decide if murder and kidnapping is justified to rescue her daughter.

Rachel Klein has survived divorce and chemotherapy.   She managed to keep herself and her thirteen-year-old daughter Kylie afloat through the thick of it.   She is looking forward to a better future.

When Rachel is on her way to a new job, she gets a call from a frantic woman claiming to have kidnapped Kylie.

If she wants to see Kylie again, the woman demands Rachel pay the ransom and kidnap another child in exchange for her daughter.  If she refuses or goes to the police, not only will Kylie be killed, but so will Rachel.  The caller explains she too is a mother whose son has been kidnapped.  And, if Rachel does not do as she is told, the caller claims she, her family and son will also be killed.  That is how The Chain works.

There’s no getting out of it, Rachel and Kylie are now part of the despicable Chain.  As Rachel struggles to get the money and determines who and how to kidnap another child, the Chain’s reach seems to be everywhere.  Strangers – regular people — bump into her, threaten and warn her to not betray the Chain.

The Chain is deadly.  Kylie’s kidnappers don’t hesitate to kill a policeman.  The Chain follows Rachel’s every move and must approve her victim.  There seems to be no way to escape the Chain.  Rachel is required to do their bidding for the rest of her life – as is everyone else in the Chain.

This is a terrifying narrative of how far one might go to save the life of one’s precious child.   Rachel is an unlikely hero.  Not a candidate who could hurt anyone.  Why did they choose her?  She is petit, poor and proper.  Although she is a Harvard grad with a PhD in philosophy, she has never used her degree.  And, worse, her cancer is back.  She is a pawn in an evil game.

But Rachel is committed to do whatever it takes to get Kylie back.  She enlists her ex-husband’s brother (ex-marine, five tours) to help, and together they kidnap a seven year-old girl.  It’s horrible.  Once the girl’s parents pay and they kidnap another child – Kylie is released.

When the mother and daughter are reunited, the two face a new challenge as the Chain continues to impact their lives.  Rachel knows they will not survive the PTSD unless the Chain is broken.

All the Chain families before Rachel and Kylie suffer in similar ways.  Rachel decides she must get to and destroy the Chain’s leaders.  If she was willing to kill and kidnap before, Rachel is determined to go to war against the Chain to save herself and her daughter.

The author does a great job revealing the Chain’s psychopathic leaders, a twin brother and sister who devised and created the Chain — their terrifying and bizarre childhoods having shaped them into duel monsters.  They are memorable villains.

I especially enjoyed the “philosophical” moments as Rachel rationalizes and considers the consequences of her actions and the nature of human behavior.  I wanted a lot more debate about the justification to kill another innocent child for the sake of saving your own flesh and blood.

The Chain’s sick designers use it to manipulate people into an inescapable horror, which brings the most moral of folks to do evil for those they most love.  A brutal dilemma no parent wants to face.  The Chain challenges and exploits the most fundamental of human emotions — love and compassion – something sociopaths cannot feel or reconcile even when they’re family.