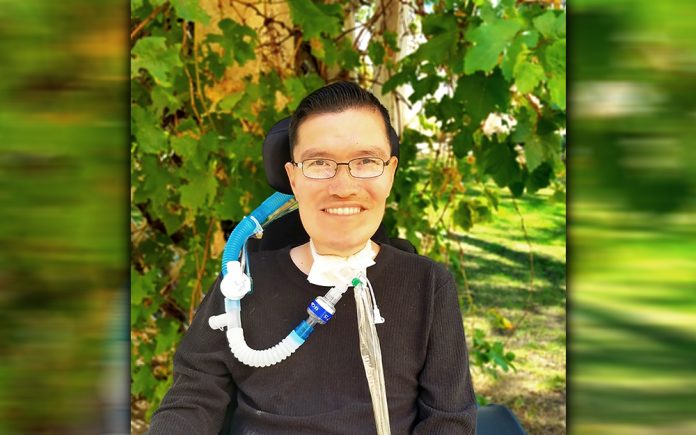 The human body is capable of so much, yet we often overlook just how important it is to function on a daily basis while some struggle to even reach their full potential. Peter Li has experienced the hindering effects of Muscular Dystrophy, a group of genetic diseases that cause progressive weakness and loss of muscle mass, since he was nine years-old. Now in his 40s, Li’s condition has worsened since then, but despite being bound to a wheelchair, he exudes an unmatchable positive, can-do attitude. This was not always the case, however, as he describes growing up with Muscular Dystrophy as an emotional roller coaster.

“All I could do was watch other kids playing, running, jumping, or swimming. My teens were the roughest. That’s supposed to be the age of experience to know what I like to do or don’t like. I wasn’t able to hang out with friends at school or outside of school. I was watching everyone else having fun and enjoying their lives and being in a relationship. I was there just to watch, and it was frustrating at times. As I got older, I learned not to dwell on things I can’t do and focus on the things I can do,” stated Li. 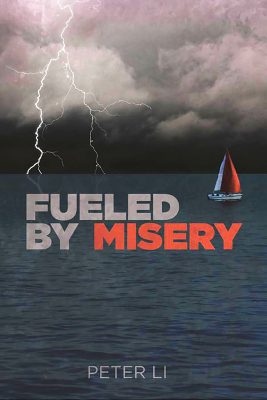 One of the hardest parts of dealing with Li’s condition is feeling as though he is a burden on his mother, as he needs constant assistance from her and physically cannot do anything on his own. His brother, Jason, also has Muscular Dystrophy, which he feels doubles the stress. This inspired Li to begin writing a book to help other mothers cope with their child having Muscular Dystrophy.

Fueled by Misery: My journey through life with Muscular Dystrophy took 17 years for Li to complete and was published by Overboard Ministries Publications. He typed the manuscript himself using a special track pad in the corner of his glasses frame that connected to keystrokes on the screen. With his autobiography now available on Amazon, Li cites the book as his greatest accomplishment to date.

“I started writing a journal and I just decided to write it out in a book format. I was inspired to finish my book by watching my mom take care of me over the years. I could see the helplessness in her eyes. She doesn’t know how to help me deal with Muscular Dystrophy. I wrote my book that describes the emotional aspect of living life for the moms out there who have kids with Muscular Dystrophy. Maybe I can give the moms a little insight of what they can do for their kids,” said Li. 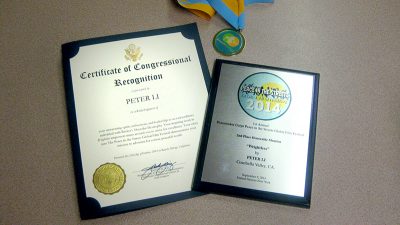 Taking up residence in the Angel View residential facilities in Desert Hot Springs with his brother as a roommate has afforded Li many opportunities to share his story and inspire others with his positivity. He has appeared on The Joey English Show, The Desert Living Show with Bryan Gallyot, KESQ News Channel 3, and Morning Coffee with Dan McGrath. He even took part in the Peace in the Street Global Film Festival, where he appeared in an anti-bullying short film called Weightless, which was played to forty countries at the United Nations Building in New York and earned Li a Certificate of Congressional Recognition.

Besides television and media appearances, Li has been featured in articles in the Desert Sun newspaper and Desert Charity Magazine. He has also promoted Angel View in commercial and billboard appearances, while also giving speeches to schools, universities, and donor functions.  Li is proud to say he has already checked off most of the items on his bucket list. 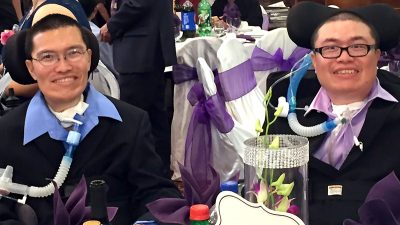 “If I wasn’t at Angel View, I wouldn’t have done so many things that I never dreamed of doing. I have the opportunities to meet all types of people to make friends with. I get to give tours of Surnow House to many visitors, have attended the Emmy Awards, attended the Palm Springs International Film Festival Awards Gala, got to do speeches to the Rotary clubs, attended prom, helped with the Disabilities Sports Festival, and attended celebrity functions like the Barbara Sinatra luncheon. Most importantly, I get to bring awareness about Muscular Dystrophy and Angel View,” explained Li.

Even with this long list of achievements, Li aspires to do even more in the future. Some of his current goals are to get his book made into a movie, finish a screenplay, write a children’s book, and get on The Ellen DeGeneres Show or with Oprah Winfrey.  In his free time, Li enjoys an assortment of activities like watching Japanese animations and movies, listening to music, meeting new friends, and taking in the sun.

Li’s message is one of uplifting perseverance through hardship that is difficult to ignore, providing a voice to those in the community who suffer from any debilitating illnesses. His reasons are personal, but his cause is universal.

“I want to let people know that it’s okay to be seen with a disabled family member or friend, and to not be embarrassed. We are out and about in the community… I would tell someone with Muscular Dystrophy that they need to let go of that anger of having it. Nothing is going to change that. Once you realize that, you’ll feel free,” stated Li.