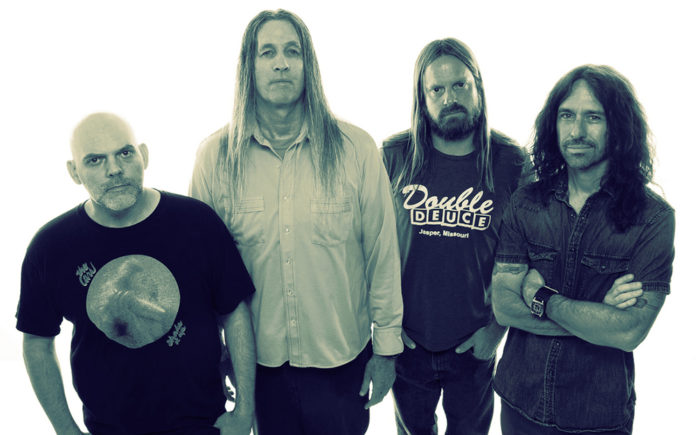 Long time heavy fuzz rock band FU MANCHU will be performing a SOLD OUT show at Pappy & Harriet’s Pioneertown Palace on Saturday, December 16, 2017 at 9:30 p.m. Scott Hill (vocals, guitar), Brad Davis (bass), Bob Balch (guitar) and Scott Reeder (drums & percussion) are preparing to release their new album, Clone of the Universe (At the Dojo Records), on February 9, 2018. Featured on the album is the prodigious 18 minute song “Il Mostro Atomico” which spotlights a guest appearance from RUSH guitarist Alex Lifeson. FU MANCHU will embark on a world tour beginning March 2, 2018 in Paris. Prior to their departure they will perform two album release shows on February 9th and 10th in Southern California. Given their history and affinity for the desert, the FU have blessed us with a warm-up show at Pappy & Harriet’s.

In speaking with Balch and listening to snippets of the album on-line I get the feeling the album will be the next progressive step after the monstrous sound of GIGANTOID.

I spoke with Bob about the sold out show, the album and upcoming tour. Not to mention some miscellaneous shit every ‘FuFan’ should know.

CVW: What do we need to know about your upcoming release Clone of the Universe and how fuckin’ stoked are you about Alex Lifeson’s (RUSH) contribution?

Bob Balch: “Super stoked! It’s the heaviest record we’ve ever recorded. I think playing together for 17 years as this lineup really helps solidify a sound. Then you introduce Lifeson from RUSH and have him play on an 18 minute song and you’ve got something special. Side two is that song.”

CVW: Dr. Fu Manchu was an archetype of the evil criminal genius. Who is the most corrupt & villainous in Fu Manchu?

CVW: And why don’t any of you sport the Fu Manchu mustache? Seems like a no-brainer.

BB: “That would be a little much. I think Reeder has had one from time to time. He did a half mustache for a day. That was killer.”

CVW: Your show at Pappy & Harriet’s is standing room only and your 2018 world tour is gaining copious momentum. How is the band preparing and are you doing anything different this time?

BB: “A new Marshall 800 for me. I also have to find some new pedals to get some of Lifeson’s sounds.”

CVW: Scott Hill has the longest tenure in Fu Manchu. Does he share with you any memories of the early days?

BB: “Sure, they had a van that was converted from an old folks home transportation van. It still looked the same and old ladies would run after Hill thinking they missed their rides.”

CVW: I was fortunate enough to see Fu Manchu perform in 1994 at Mario Lalli’s Rhythm & Brews in Indio, California. You’ve been a member since 1996. How does it feel to be a part of a band with such a huge legacy?

BB: “Pretty good. I don’t really reflect on it like that. Just try to address the matter at hand, be it ‘where’s the toilet?’ to ‘how long is our drive tonight?’ simple stuff like that.”

CVW: Your last album GIGANTOID was essential Fu Manchu; stripped down with fanatical fuzz. How would you review Clone of the Universe?

BB: “It’s like the next step sonically after GIGANTOID with fuzzier tones and heavier riffs. And then again….we got Lifeson!”

CVW: Your website PlayThisRiff.com (music lessons for fans by the very artists who perform the songs) continues to thrive. You have interviewed and filmed lessons from artists like Adolescents, Anthrax, Clutch, Deicide, Every Time I Die, Exodus, Fatso Jetson, Gwar, Helmet, Kyuss, Obituary, Queens of the Stone Age, Trivium and 3 Inches of Blood. What keeps you providing these videos and giving private guitar lessons? In other words what type of fulfillment do you get out of it?

BB: “Money! Really! I teach 11 hours a day. I love my job. It’s made me a better player. I also love PlayThisRiff.com because I can bother bands I grew up listening to for interviews and they usually say ‘yes.’ I just interviewed Wayne Kramer from MC5 and lifted a lot of his ideas for this new record; just ways of playing with two guitar players in a band and inverting chords and stuff to get bigger sounds.”

CVW: Anything else you want to add?

BB: “Come on out and see us rock an epic 18 min song. That’s once the record comes out Feb 9th. And check out PlayThisRiff.com if you play guitar!”

Clone of the Universe track listing: