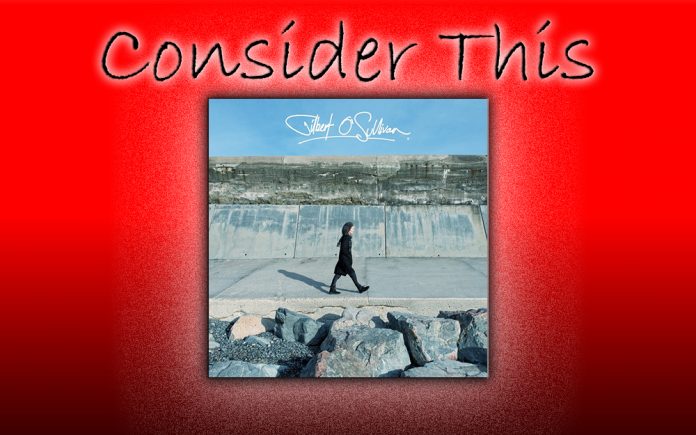 “I’m not suggesting for one minute living in the past is everything that it’s cracked up to be/But don’t tell me the future is looking at a phone, you sit for hours knowing in it’s powers you are who it owns”

That’s Gilbert O’Sullivan, indulging in a little nostalgia on “Dansette Dreams And 45’s” off his new, self-titled album. In turn, that inspired me to briefly reflect on my yesteryears.

I was born in the early ‘60s and came of age in the ‘70s. Technically, I’m a Baby Boomer, although I’m also part of Generation X. Somehow this shit overlaps, and I don’t care enough to google why. Point is, I grew up in the late ‘60s/early ‘70s. Shag haircuts, shag carpet and crushed velvet bell bottoms are touchstones for me, much like Bobby Socks, saddle shoes and Frank Sinatra defined teenage girls from the Greatest Generation.

By the early ‘70s, I was obsessed with “The Brady Bunch,” Fish stick Fridays at school, somehow tricking my mother into letting me wear pants instead of dresses to school and, of course, music.  L.A. radio was the soundtrack for my childhood, and although I have never written them down, I have had at least one favorite song a year since I was four in 1967. (“Happy Together,” by the Turtles, in case you care).

When I was nine in 1972, my two favorites were “Me And Mrs. Jones” by Billy Paul and “Alone Again, Naturally” by Gilbert O’Sullivan. Anyone familiar with these songs, know they are diametrically opposed. The former, is a slice of creamy Philadelphia Soul detailing the bliss and agony of an extramarital affair. (See, they “had a thing going on”). The latter, was a lachrymose ballad about feeling isolated and all alone in the world. I had heard it a million times on the radio- both songs shot to #1 on multiple Billboard charts-when it came on during the car ride home from my mother’s restaurant. Listening to the song that day, I suddenly burst into tears, because I was missing one of my cousins in Denver. Right there, in that moment, I too felt alone, again, naturally.

Gilbert was born Raymond Edward O’Sullivan in Cork, Ireland, in December, 1941. By the time he was seven, his family moved to Battersea, London, a year later they relocated to Swindon, Wiltshire, England. While attending Swindon College Of Art he cycled through a series of bands, one of whom included Rick Davis, who would go on to form Supertramp.

By 1967, he had signed a five-year contract with a music publisher. His manager suggested he change his first name to Gilbert, as a nod to Operetta composers Gilbert and Sullivan. He didn’t really make much headway until he signed with Tom Jones’ manager, Gordon Mills who added him to his MAM record label. He had his first Top 10 U.K. hit in 1970, but it wasn’t until 1972 that he achieved international stardom with “Alone Again…” It received two Grammy nominations for Song and Record of the year, but lost both to Roberta Flack’s “The First Time Ever I Saw Your Face.”

A year later he hit #2 on the Billboard Hot 100 with “Clair” the single from his Back To Front album. The song travelled some twee territory, whistle-y intro and all. The lyrics ambiguously shift, from an adult love song to a sweet ode to his manager’s toddler child. Her fey giggle closes out the song. In quick succession his third record, I’m A Writer, Not A Fighter arrived in late 1973. A rollicking effort that rocked a little harder, incorporating electronic keys and synths, it leaned closer to the music of Elton John and the Funk flavor of Stevie Wonder. A huge change of pace, it would be the last time he hit the top of the charts.

Music is a fickle business, and although Gilbert continued to write and record interesting albums, genres like Disco and Punk seemed to eclipse his appeal. His last Top 20 single appeared in 1975 and protracted legal proceedings against Gordon Mills kept him out of the recording studio until 1980.

Weirdly, he achieved street cred in the Hip Hop world when Biz Markie sampled “Alone Again, Naturally” and later J. Dilla blended a bit of “Clair” into the Slum Village track, “Players.” But Biz used the song without permission. Gilbert sued and won, citing copyright infringement. That judgement changed the Hip Hop music industry, requiring any future sample to be cleared by the original copyright owners to avoid litigation.

All told, Gilbert has released 18 studio albums since 1971. His latest, which is self-titled, is produced by Ethan Johns. The son of legendary producer, Glyn Johns (Small Faces, Rolling Stones, Humble Pie, The Who, The Eagles, Bob Dylan, to name a few), Ethan has worked with everyone from Ryan Adams, Kings Of

The first three songs kind of set the tone for the album. “At The End Of The Day” opens with lonesome harmonica, buttressed by fluttery keys, razor-wire guitar and a breezy rhythm. Gilbert’s warm tenor is surprisingly boyish as he wryly ruminates on the passage of time; “Say what you like, it’s nice to be told, you look so much younger than you do now old.” A winsome harmonica solo on the break underscores the gentle sincerity.

The melody and arrangement for “The Whole World Over” packs a surprising Power Pop crunch, anchored by a see-saw beat, rambling guitars and wooshy organ. Droll lyrics reflect on the peaks and valleys that accompany the aging process; “A wise old woman once told me grow old but gracefully, don’t go wasting time, what lies ahead will soon be behind/And I must say she’s right, no sooner is it dark when suddenly it’s light.”

There’s an inherent sweetness to “Love How You Love Me,” which is powered by player-piano arpeggios, darting keys and rippling electric guitar. The melody is equal parts Beatlesque and Ye Olde English Music Hall, while the lyrics offer a lovely encomium to decades-long domestic bliss; “The way you in the dead of night, the morning too even into the light, love how you leave me, leaving me love you.”

The latter is a wistful, Country-flavored waltz. Dansette was a British brand of record player that were manufactured just in time for the advent of Rock N’ Roll. Over a tick-tock rhythm, swelling strings and reverb-drenched guitars, lyrics recall those halcyon days when Rock N’ Roll was all that mattered.

The best tracks here feel a million miles away from “Alone Again, Naturally.” Take “What Is It About My Girl,” it simply pulsates with New Wave-ish energy. Wiry guitar riffs, angular bass lines and brittle keys are tethered to bendy beat. Rapid-fire guitar riffs wig-out at the close of every verse, and Gilbert’s mien is blithe and playful as he recounts his true love’s attributes.

It’s clear from the brisk Boogie-Woogie piano, rollicking guitars, tensile bass lines and sturdy back-beat, that “This Riff” is a sly homage to Rock N’ Roll progenitors like Fats Domino, Chuck Berry and Bo Diddley. Lyrics like “Played as I say like a gentle refrain, is not how it should be done/Let the hammers fall as your pounding it out, going for hammer and tongue,” leaves no room for equivocation.

Finally, “The Mind Boggles,” performs some musical slight of hand. It opens with churchy organ notes and rhythmic piano interplay that promises to meet somewhere between “The Lord’s Prayer” and the choppy chord progression of “Heart And Soul.” But it suddenly turns on a dime, latticing ringing, Byrdsy guitars and sinewy bass atop a ricochet rhythm. The lyrics seem to question the efficacy of modern technology.

Other interesting tracks include the celestial symphonic shimmer of “I’ll Never Love Again,” the swivel-hipped grace of “No Head For Figures But Yours” and the meandering character sketch of “Where Did You Go To.” The album closes with “For The Record,” a Folky Minuet featuring a stately French horn solo. Here, stealthy lyrics seem to be taking aim at the jingoistic policies of Brexit.

Nearly 50 years ago, Gilbert O’Sullivan’s songs provided psychic salve for my tender (somewhat melodramatic) emotions. It’s nice to report his music continues to resonate, with me and anyone smart enough to pay attention.