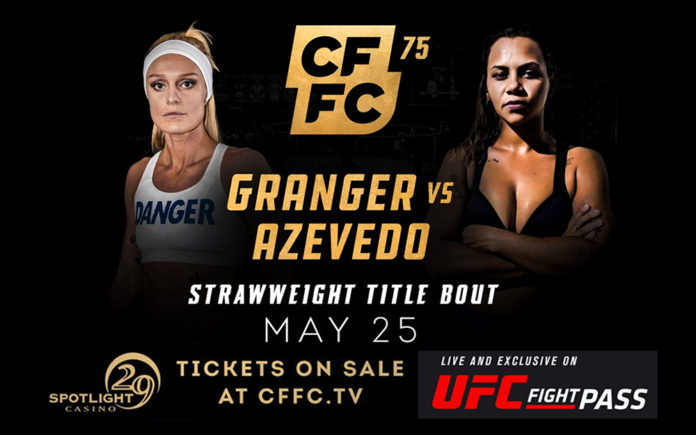 Miranda Granger is in the (Danger) Zone

Miranda “Danger” Granger has been making waves in the world of Mixed Martial Arts (MMA) fighting, being regionally ranked #1 in the Pacific Northwest women’s group pound for pound and having a current winning streak of 10 wins with a Pro MMA record of 5-0-0.

Granger will compete against Brazilian hopeful Heloisa Azevedo in the Cage Fury Fighting Championship (CFFC) 75 at Spotlight 29 Casino on May 25. This momentous match marks CFFC’s return to California and the introduction of the strawweight title, as well as being Granger’s sixteenth fight to date.

“I’m feeling very excited about this upcoming fight. I feel very strong; my weight cut’s been very easy, so I feel better than ever,”

Granger started martial arts training when she was four-years-old, taking Taekwondo classes and receiving her blackbelt when she was 12. She has trained with the same coach, Charles Pearson, since her youth.

“I’ve known him basically my whole life. He was always been there for support and motivation when I need it most,” said Granger.

After practicing kick boxing in high school, Granger decided to get into the world of mixed martial arts fighting.

She has since dominated every match as a pro, defeating the likes of Jamie Colleen, Jamie Thorton, Ivana Coleman, and Nikkid Lowe, within the last two years alone. Having reached pro status, she has honed her skills and abilities—both mentally and physically.

“My mental toughness and the ability to push myself beyond what I thought was possible have definitely grown over the years. From a young age, people have tried to set boundaries for me saying very few become professional athletes. I always knew I would be one of them. That just goes to show that no one can put a barrier on you,” stated Granger.

While being underestimated because of her age, Granger also understands the struggle that women go through in the world of professional sports and MMA fighting in a field traditionally dominated by men. Her advice to women wanting to break out of those societal expectations is to never doubt themselves. She also encourages every woman to take any kind of martial arts class at some point in their life.

“MMA fighting is not normally considered to be a womanly sport, but at the same time, I’ve never felt more empowered than I do when I’m in the cage, and it’s not just because I’m a girl. I go out there and everyone is a fighter. You turn into a fighter,” explained Granger.

While preparing for her upcoming fight, Granger has employed the same rigorous exercise regimen that she has maintained throughout the course of her career to stay in shape.

“I pretty much live at the gym. I would say that a typical day would start with a morning run between two to ten miles long—depending how I feel. I go home to eat before starting my workout. At that point, I usually do some kind of lifting workout with my coach, and then follow that up with some cardio or sparring. I try to keep my body as healthy as possible. I can spend as long as eight hours at the gym,” revealed Granger.

With confidence and the determination to push the limits of her mind and body, Granger has prepared for her upcoming match with the intention of taking home the historic title.

“I want to show my appreciation for CFFC. They’ve been so helpful and accommodating throughout my journey. I’m very thankful to be part of this event and represent my team through it all,” said Granger.

Brazilian dynamo Heloisa Azevedo will face off against Miranda Granger in the Cage Fury Fighting Championship (CFFC) 75 at Spotlight 29 Casino on May 25 at 6:00 p.m. The two Mixed Martial Arts (MMA) stars will compete for the first-ever CFFC Strawweight (115-pound) title at 6 p.m. live in the Spotlight Showroom.

With a Pro MMA record of 4-1-0 and being the #53rd ranked in the Women’s Pound for Pound in Brazil, Azevedo has proven herself to be a worthy contender for the title, even earning the nickname of Mão de Pedra (Stone Hand).

Getting the chance to compete in this Championship has been a goal of Azevedo’s ever since fellow teammate Isabelly Varela competed for the CFFC title in 2016 against Katlyn Chookagian.

“I train under my coaches Josimar Junior and UFC’s Talita Bernardo. We train in a lot of BJJ, Wrestling and Boxing. We’ve also trained in some Muay Thai for this fight,” explained Azevedo.

Azevedo has high hopes for her match against Granger, despite her opponent’s undefeated winning streak of 10 fights and a Pro MMA record of 5-0-0.

“I am very confident that I will put on a show and come out with the belt, I believe my game matches up well with my opponent’s,” said Azevedo.

Her passion for MMA fighting derives from the thrill of knowing that anything can happen at any time during a match, always keeping Azevedo on her toes and challenging her capabilities in the ring.

In support of female empowerment and testing the boundaries and expectations of women in the ring, Azevedo encourages women interested in practicing any sport or martial arts to pursue their goals with passion and dedication.

“Keep training, keep believing and keep fighting. Always take your career step by step and believe that you will arrive here one day,” stated Azevedo.

Throughout her successful MMA career, Azevedo has come to realize how strong she is and continues to test herself with every adversity that comes her way, in everyday life and during matches.

“I can’t wait to show the USA and the world who Heloisa Azevedo is. My team is growing a lot. Right now we have two UFC fighters in Johnny Walker and Talita Bernardo and I am ready to be number 3!” exclaimed Azevedo.

CFFC’s first appearance in California and the inaugural straw weight title makes this upcoming fight one for the books, and Azevedo could be one step closer to making history.