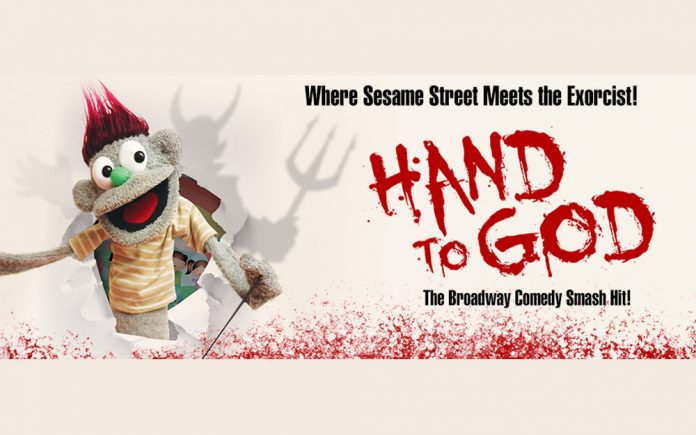 Hand to God, is a southern expression that is often used in an effort to get others to believe that what is being said, is the absolute truth. It is also the title for Robert Askins’ award winning comedy currently kicking off Dezart Performs twelfth season.

Self-described as ‘where the exorcist meets Sesame Street,’  “Hand To God,”  tells the story of several devoutly religious characters living in Cypress, Texas.  Margery, (Yo Younger,) is a widow whose husband has recently died. To keep her occupied, her minister, Pastor Greg, (Roy Abramsohn,) has asked her to run the puppet club, which is often used in Fundamentalist Christian congregations to teach children how to follow the Bible and avoid Satan. Margery’s son Jason, (Eddie Vona,) Jessica, (Brenna Williams,) the sweet girl next door and only seemingly normal person, and Timothy, (Danny Gomez,) the neighborhood troublemaker, all attend the Puppet Making class as a part of their church education.  Religious values weigh heavy on these characters.  Unrealistic expectations require they hide their dirty laundry a little deeper.  Everyone’s life is thrown into turmoil when suddenly Jason’s Puppet, Tyrone, takes on a life of his own, announces that he’s Satan and begins to vomit out all of the well-guarded secrets that will most certainly destroy their pious images.

Hand to God, has some of the finest actors to cross a stage.  Younger, is mesmerizing in just about any role, but she really portrays Margery, the widow on the edge of a breakdown, with such realism that, like an oncoming car crash, it will be impossible to look away.

Vona, as the good son Jason, is absolutely riveting when Tyrone, the demon puppet, possesses him and lets the mouth and words of a deranged psychopath take control.  His ability to switch voices between the good Christian teen and the devil incarnate, will have you watching from the edge of your seat.  Williams, Abramson and Gomez round out this incredible cast. Together they all display some wonderful chemistry.

Michael Shaw is a very talented director and he brings his A game to this production with such ease.  Thomas L. Valach’s Set Design, Derrick McDaniel’s lighting and Aalsa Lee’s costumes all contributed to the top-notch professionalism of the show.

While the production and performances for this show are top quality, it’s the script I struggle with.  I love a good laugh and part of any culture is often humor.  We laugh at others misfortunes and ideas that are different from our own.  And it’s acceptable to take humor with a grain of salt, even when it’s offensive and disturbing. Hand to God, certainly accomplishes that.

But we have also learned that there are some topics in our society that are no longer funny to make jokes about.  Racism has fallen into that category. We have finally arrived at a time when there is a common agreement that insulting jokes about race are no longer funny. Unfortunately, we seem not to have arrived at that point when it comes to blatant sexism.  The idea of calling women derogatory names and insulting their bodies still seems to be a line that writers feel is acceptable to cross.  I don’t.  Theatre is a reflection of our culture and our communities. Women have a long history of subjugation and degradation and being the butt of the joke. Hand to God, is extremely sexist and as we approach the year 2020, it seems that the idea of women’s degradation should be a topic that we no longer find to be an acceptable form of humor or a reflection of our community.

Hand To God, is running through November 17th.   For Mature Audiences.