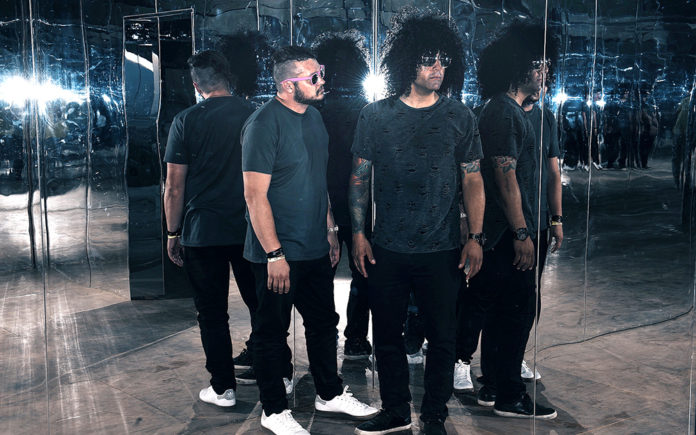 Do you remember Mingtran, Breakdance Vietnam, The Jovian System, and Metroid? Some of the members of those bands are back with a new band, High Fantasy. Orlando Welsh was done with music, stating, “After Metroid went on hiatus, I was super depressed about music… I didn’t want to play anymore.” Thankfully, Fellow Metroid member, Ryan Jovian, convinced him it was time to start again. It was fun again for Welsh. “Ryan came to my Palm Springs apartment and we just started jamming again and the vibe was there. I play bass, he gets on his guitar or his keyboard and we come up with ideas and record them on the spot, then Ryan goes to his home studio and chops the songs up to create what we then put vocals to. We write the vocals very organically, I come up with a line then Ryan comes up with a line and a melody and go with it. It’s never forced. If it’s not fun, we trash it.”

Being able to record and produce from Jovian’s home is also a plus. There’s not the stress of paying for a studio and having to schedule time off to go to the studio. This allows Welsh and Jovian to get the exact sounds they have been after. If you are a fan of Welsh and Jovian, High Fantasy (yes, it is a Dungeons & Dragons reference) is a band you definitely need to check out. It seamlessly blends indie rock and shoegaze with a pinch of EDM thrown in. Their first song, “Firelike,” will be released with a video on November 7. Keep an eye on SoundCloud and YouTube.