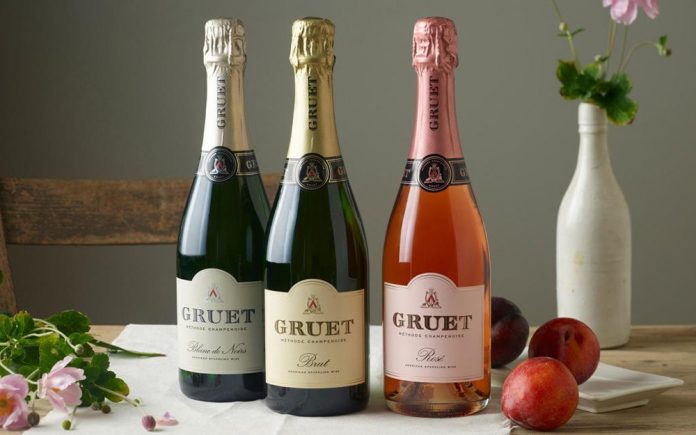 Anyone who has perused the sparkling wine section at your favorite wine store has no doubt come across a bottle of Gruet sparkling wine. And hopefully your interest was piqued when you looked at the rather French-style label and read: American Sparkling Wine.

The next point of interest that should have grabbed you is the fact that the wine is produced and bottled at the Gruet Winery that is located in New Mexico. And that’s the story right there.

Gilbert Gruet, founder of Gruet Winery, was born in Bethon, France in 1931. He grew up in a poor family and began working at a young age. In 1952, Gruet, along with his wife Danielle, dreamed of producing fine quality Champagne. Gilbert followed his heart and in 1967 created the U.V.C.B. (Union Vinicole des Coteaux de Bethon), a co-op in the village of Bethon.

In 1983, the Gruet Family was traveling through the southwestern part of the US, and while in New Mexico met a group of European winemakers who had successfully planted vineyards in Engle, near the town of Truth or Consequences, 170 miles south of the city of Albuquerque. After hearing of vineyards planted there as early as the 1600s and learning about the specific climate and soil conditions of the region, the Gruet Family knew they had found what they were looking for. And of course Gruet rhymes with hooray.

It’s this fact of American wine history that most Californians are unaware of. The Spaniards settled this rich country in the late 1500s, and as devoted Catholics, attended church frequently. Of course, a vital part of Catholic Mass is communion—a sacred ritual which involves accepting the symbolic body of Christ with wine and bread.

But here was a major shortage of wine in the New Mexico region. In 1595, the Spanish put in place a law to protect Spain’s thriving agricultural industry, thereby prohibiting Spanish grapes to be exported and planted in foreign soil. New world Spanish settlers scratched their heads on that one.

For a while, the monks were forced to use small amounts of imported wine that contained a lot of alcohol & sugar (needed to protect the wine on the Atlantic voyage). And they were desperate for a local source of wine to produce something more palatable for the people.

The colonists had to do what they had to do! In 1629, rebellious Spaniards smuggled vines out of their home country and planted New Mexico’s first grapes in a field just south of modern-day Socorro. The variety that was planted is currently known as the Mission grape and is still grown in New Mexico today.

In 1984, Gruet made the decision to plant an experimental vineyard in Engle, NM. The plantings were exclusively Chardonnay and Pinot Noir grapes. As mentioned above two of his children would take the lead of what soon became the American endeavor, Gruet Winery. The first official wine release from the Albuquerque-based winery was in 1989. Using the traditional méthode champenoise technique, they began producing sparkling wine exclusively from Pinot Noir and Chardonnay grapes.

Like his father, quality is Laurent’s top priority and it underscores his winemaking passion today. In 2011 Wine Spectator named his Gruet NV Blanc de Noirs a Top 100 wine of the world, a crowning jewel of acclaim for any winemaker and nearly unprecedented for a sparkling wine under $20. The Gruet Grande Reserve, a Blanc de Blancs that is as true to Old World champagne as possible in America: rich, complex and long-finishing. It is barrel-fermented like the old style, and some of the best champagne houses still use this method today. The style reminds Laurent of his childhood.

Of course, having French in his blood, Laurent’s favorite still wine to make is Pinot Noir. “I have always called this variety the king of the grapes,” he says. “Still Pinot Noir is the most sophisticated wine and very versatile with food. It is my favorite wine to drink, with a very feminine and delicate character.

And now as a resident of New Mexico, Laurent tirelessly supports local and regional events through the winery, such as Vintage Albuquerque and Santa Fe Wine and Chile, benefiting the New Mexico Youth Symphony Orchestra. When he’s not making wine, you’ll find him playing tennis, skiing and cooking.

Last year Wine Spectator Magazine ranked the Gruet Brut as one of the year’s top 100 Value Wines; Bon Appétit praised it as a “crisp, dry, elegant sparkler; and Martha Stewart’s Living Magazine extolled the merits of their sparkler rosé.

As the wine world knows, sparkling wines are selling more than ever. Gruet surged 35% to 190,000 cases last year and grew more than any other sparkling wine company in California, which includes the big hitters like Domaine Chandon, Mumm Napa, Roederer Estate, and Gloria Ferrer—wow!

And the market is going to explode. Brazil is one of the biggest importers of French Champagne; China falls in that group as well. Gruet and their new partner Precept Wine Company anticipate going global claiming, “We have many options. Export in the next ten years is going to be big growth for Gruet.” Hmmm…It’s a brave new wine world out there—like it or not

The non-vintage Gruet Brut shows lemon and sweet bready aromas on the nose. Flavors of apple and pear with a toastyness throughout. There’s also white peach and lime zest that finishes with crisp medium acidity. ($16).