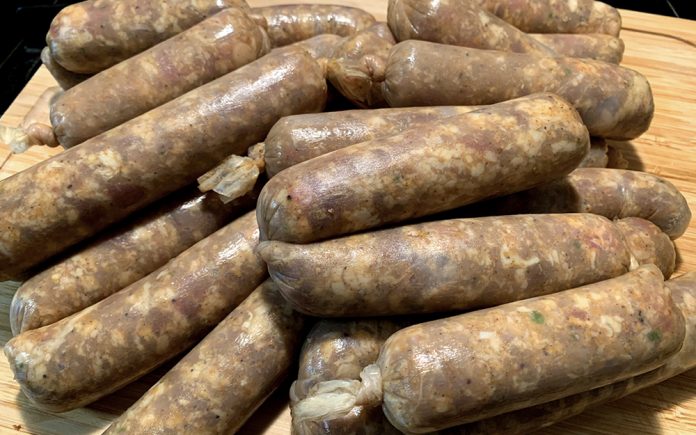 If you’ve never attempted to make your own sausage before, the first part is easy; the part where you make your filling. For this recipe, it’s just ground pork, spices, peppers, citrus, beer. If you can make a meatloaf, you can make this sausage filling. In fact, here’s the recipe, should you ever be tempted to recreate my Serrano, Orange and IPA Sausage.

8 lbs. Picnic roast or Boston butt. Both are cuts from the shoulder, and are the most flavorful part of the hog. High in both fat and connective tissue, this cut of meat lends itself very well to sausage making. You’ll want about 20% fat in your sausage, as your sausages will be tougher and drier when cooked without it, so don’t be afraid of buying a roast with a nice rind of fat. If you don’t have a meat grinder at home, you can have the market butcher grind it for you.

The first thing you’ll want to do is add the dry spices to your ground pork, and mix well. If you are grinding your own sausages, go ahead and chill this mixture for an hour in your refrigerator, or 20 minutes in your freezer before grinding a second time through a smaller plate (I forgot this step, and ended up with chewier, chunkier sausages from only grinding once). Cold fat keeps shape better and won’t liquify into oil as your attempt a fine grind. If you’ve purchased your pork already ground, just mix your spices in and set aside.

Puree your peppers, garlic (peel the paper off and separate the cloves first), orange and lime zests all together in a blender or food processer until it forms a slurry. Mix slurry, and an entire bottle of beer into your ground, spiced pork, and mix well. 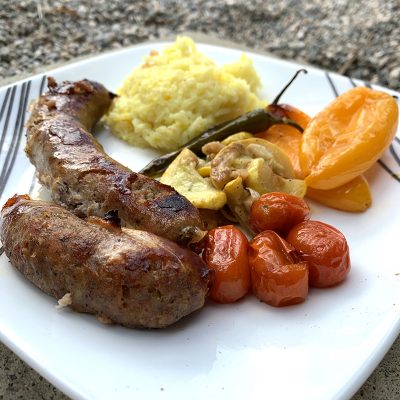 You now have a bulk-mix. With the citrus and baking spices, this recipe is well-suited for breakfast, but is versatile enough to go with any meal. You can form it into patties by hand and fry it on your stove, which I highly recommend doing if you don’t want to invest in a sausage stuffer. I do have a sausage stuffer, so I attempted to stuff my mix into sausage casing without really knowing how. It’s not that I don’t have the internet or anything, I’m well aware that there are multiple YouTube videos available to me that would have shown me exactly what to do. But, as it were, over confidence is the great humbler of man, and I was feeling way over confident about everything. 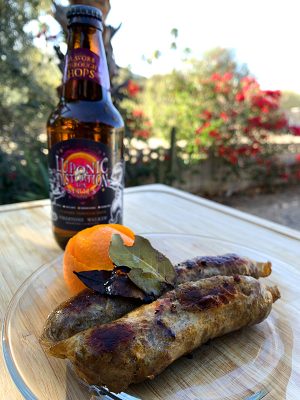 When stuffing sausage casing, you’re supposed to bunch your casing up flush to the base of the rod, tie a knot at the end of the casing, and let the casing expand out as it’s filled. What I did was the complete opposite, creating a massive mess at every step as I attempted to fill, twist off, then tie off squishy, balloons full of raw pork. I’d also added too much orange juice to my mix (which I’ve since corrected in the recipe given above), and my sausages were much too moist, softening the collagen casing and bursting some of my sausages as I attempted to tie them off. There was a lot of trial and error in my first effort, and a whole lot of Lysol went into disinfecting every surface of my kitchen afterwards, but I’d finally done it and created my own sausages from scratch.

Flavor-wise, these sausages cannot be beat. The IPA adds a bit of bitter, earthiness that blends perfectly with the taste of citrus and garlic. The peppers adda bit of heat, while the spices give warmth and savory flair. I will attempt to do these again in a week or so, and do it right this time, but this was a very fun experiment in cooking with beer that I would recommend to all of you.