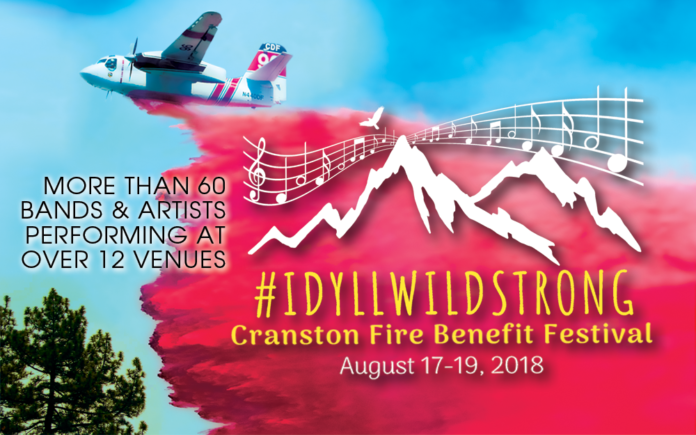 Musicians Rally to Help the Victims of the Cranston Fire in Idyllwild Friday through Sunday, August 17-19, 2018

Beginning on July 25, approximately 13,139 acres burned over the course of 17 days in Idyllwild’s Cranston fire. The estimated containment date was Friday, August 10 with over 1,000 fire personnel from across the state, required to get the blaze out.

Brandon N. McGlover, 32, of Temecula has been charged with 15 counts of arson, following the Cranston Fire. The Riverside District Attorney alleges McGlover set nine separate fires on July 25 in the Idyllwild, Anza and Sage areas. McGlover pleaded not guilty to all 15 counts during his arraignment [July 27th, 2018] at the Southwest Justice Center in Murrieta.

With so much devastation to the town of Idyllwild and surrounding areas, including homes lost, businesses suffering damages, and residents and businesses losing all of their food from the power outage, a benefit will take place this weekend Friday through Sunday all across Idyllwild to help raise money for those affected.

The community has banded together after the fire, but many people are still in dire need of help, especially those who lost everything in the blaze. The response from town as well as neighboring communities has been astounding! This festival will bring much needed revenue to the local businesses of Idyllwild, as well as provide relief for those victims who need it most. This is a 501(c)3 nonprofit event. All monies raised will be dispersed amongst the victims tax-free, and all donations made will be tax deductible. There will be donation stations at all 12 participating venues, plus raffles and silent auctions for the 60+ items that have been donated.

Free Admission, all ages welcome.  501(c)3 event presented by Young Idyllwild and Soroptimist International of Idyllwild. The benefit’s Event Coordinator, Brian ‘Puke’ Parnell, guitarist from punk band Throw the Goat, who is also an Idyllwild resident, spoke with me about the fire and the benefit.

CVW: Are you the one spearheading this event and was it your idea? 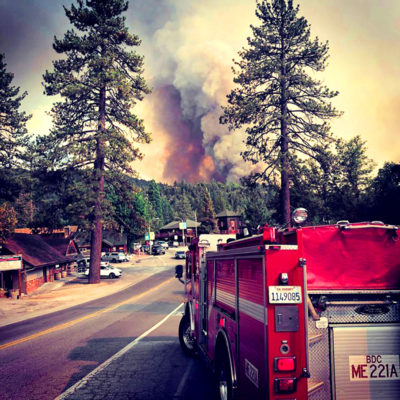 Brian ‘Puke’ Parnell: “When the fire started on July 25th and word started spreading about the houses that had already burnt to the ground, my first thought was to do a benefit CD on Regurgitation Records. That idea morphed into a CD and concert. I was still in Idyllwild during the evacuations, volunteering at the local fire station to feed the crews and also keeping evacuated people updated. I had mentioned the idea of a concert and album to some of the business owners in town and they liked it, then I got approached by a local nonprofit, Young Idyllwild, about putting something together. The fire wasn’t even halfway contained yet at this point. Once town started getting repopulated, I put the idea out there on social media and the response was overwhelmingly supportive. It turns out a couple people in town were thinking along the same lines and we all got put in contact with one another through social media. From there, we started delegating duties with myself as the Event Coordinator.”

CVW: Is there a specific 501(c)3 that the money goes to so people know?

Parnell: “Young Idyllwild, as I mentioned, but Soroptimist International of Idyllwild are also helping out.”

CVW: At the donation stations what all items aside from cash should people bring that fire victims still need?

Parnell: “Donation stations are mainly for receiving cash donations during the festival, although we’ll be able to accept checks and cards as well. All donations will be tax deductible. We’ve received donations of over 60 items for auction and raffle so far. But to those looking to bring up food, water, clothing, etc. for those still in need, the best place to bring those items is to the Idyllwild Help Center, another great nonprofit in town.”

CVW: For those that can’t attend, is there a GoFundMe or somewhere they can directly donate funds to?

Parnell: There are GoFundMe pages set up for victims and those can be found on the Idyllwild Town Crier website. Just keep in mind that the GoFundMe website will take a cut of whatever is raised, and whatever is left will be taxed. We definitely encourage people to make the drive up, support the local businesses and donate directly at one of the donation stations that will be set up around town. 100% of those funds will go to victims, tax free.”

CVW: Do you have any stats on how many people lost their homes?

Parnell: “We know of at least half a dozen families whose homes were either damaged or completely destroyed. There are other leveled buildings where an owner has yet to be identified. We’re working with the local newspaper and other residents to keep up to date on the damages.”

CVW: In your words can you share what it was like for you to come so close to possibly losing everything? And how close did the fire come to your home? 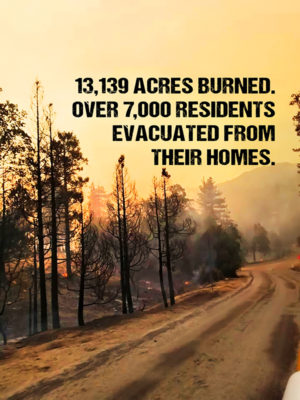 Parnell: “To be perfectly honest, this was my fourth fire that I’ve lived through up here. Some have been much worse than others. So, I had an almost irrational confidence that things were going to be okay. I could see the smoke coming from Inspiration Point and before too long it had really seemed to improve. Then the power went out and I walked into the center of town. I saw the smoke rising from the area where the Transfer Station is… and then it got scary. That’s less than 2 miles from my place. I picked up another 12 pack and went back home right as Mike from TTG pulled up to my place in the red van. We had a couple beers and agreed that the fire was too close for comfort and it was time to start packing. It’s a pretty surreal feeling to be looking at all your belongings and start deciding what’s worth taking and what is okay to stay and burn. Good thing I’m not much of a hoarder.”

CVW: How has it affected the businesses up there? Are they all back open or did they have fire damage?

Parnell: “The middle of town was spared from any fire damage. But Idyllwild’s economy depends on tourism. Being evacuated for a week seriously hurt our businesses in lost revenue. Not to mention being without power all that time, so the restaurants lost massive amounts of food to spoiling. We’ve already had one business shut its doors completely. Others are struggling to keep the lights on and taking it day by day.”

CVW: How is the air quality up there currently?

Parnell: “The air quality had just gotten much better, although new fires in other areas of California aren’t helping the situation. For the most part it’s just fine.”

Brian ‘Puke’ Parnell is the guitar player for Throw the Goat