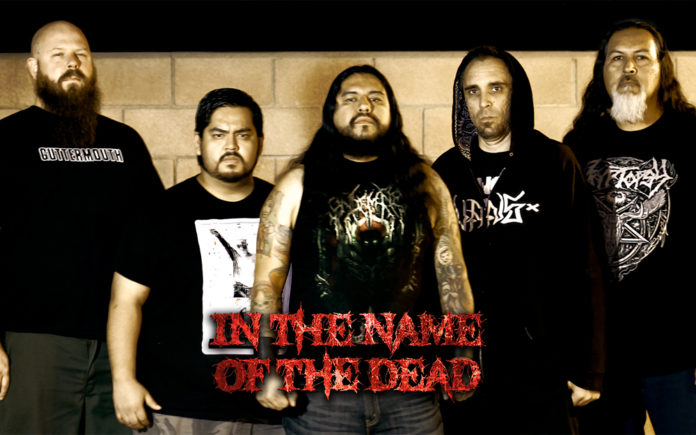 In The Name Of The Dead (ITNOTD), the band that has strived to become the loudest and most obnoxious metal band in the Coachella Valley, and has succeeded in doing just that, is definitely shaking things up for the upcoming year!  Band members Luis Diaz (guitar), Tetsuo “Tut” Olivares (vocals), Woody (Bass and vocals), Justin Cira (drums) and Ruben Torres (guitar) are gearing up for a busy year ahead.  The band describes their music as “Overall loudness” with Elements of death, mixed with a melodic tune, what they refer to as “Death Groove.”   ITNOTD are geared up for a busy year ahead with the release of their new EP and set shows you will not want to miss.

The band based out of The Coachella Valley, are ready to venture out and go full force playing shows that are set throughout Southern California.  Their new EP, Chaotic Psychosis, will release on February 14, 2018. The album includes their first single release of “The Hunted,” which represents a little of all five songs recorded. The band explains that “it is also the most brutal song of them all.”  In Chaotic Psychosis, ITNOTD delivers a massive sound that will keep you enraptured throughout their highly-fueled and intense sound. The members, influenced by a variety of genres of music incorporate those differences in their music’s writing and execution process.  Their influences include Metal, Punk, Jazz and Hip Hop.   All members of the band all have a part in the writing process and put heart, soul and some personal truths into their songs with common themes of mortality.

The band has come to be known as “that loud ass band” because they are loud and heavy and on occasion have shut down places because they have blown out fuses for playing so loud.  With the Metal music scene fluctuating in the Coachella Valley they have managed to maintain being one of the last metal bands from the last wave here that are still very active.  They feel that by their persistence, keeping it professional, and being true to themselves and their music is how they have survived the metal scene and would like to bring it back.   The band has expanded their fan base by getting involved in shows that include all genres of music where they performed to a diverse audience that wouldn’t have listened to metal otherwise, and then became fans of their music. According to the band, “Witnessing fans having a great time and rocking out, gives us such a rush and makes everything worthwhile, but the best part of it all is when we see families at a show together with kids on their parent’s shoulders head banging together.”

Their new EP will be released on February 14, 2018, following the release of their lyric video “They Came With Machetes,” which is reference to the Rwanda genocide.  With several shows lined up, their next local show is on March 24th at The Hood Bar and Pizza in Palm Desert.  ITNOTD have two upcoming competitions, one is Wright Record Battle of the Bands IV for a chance to win a record deal with Wright Records, The Orchard and Sony Music Entertainment on February 2 at Characters in Pomona.  It has been a dream of the band to play at The Wacken Open Air in Germany and now it may be coming true if they win that spot after competing in the Wacken Metal Battle on March 2 at Brick By Brick in San Diego. You can support the band by purchasing tickets on the event pages on their ITNOTD Facebook page.  Wish you the best of luck guys!  Other set dates and times for their shows can be accessed on ITNOTD Facebook and Instagram pages.  The band reports that they will continue to branch out and expand playing shows anywhere and everywhere, stating, “2018 is the year they’re trying to push ITNOTD upon the world.”  The EP will be available on all platform sources (CD Baby, Bandcamp, iTunes, Amazon and Spotify) after its release date. ITNOTD is off to a great start, we look forward to your success.