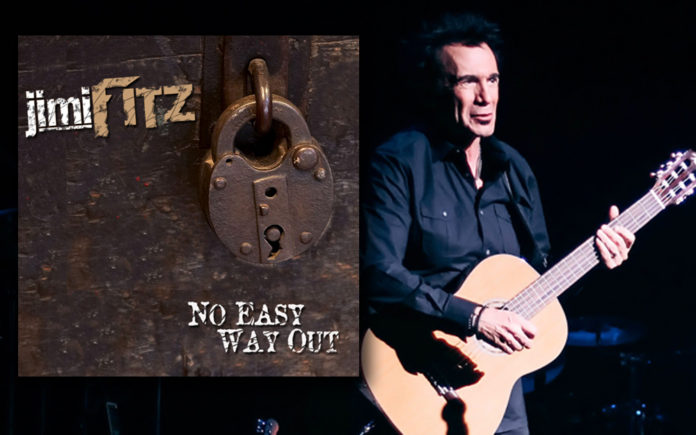 Jimi Fitz returns with his new album No Easy Way Out, following his solid 2014 self-titled album. The new record offers up 8 tracks – 7 studio recordings and 1 live recording with the band Penny University. This collection delves more into the rock side than his previous record.

Opening the record is the title track “No Easy Way Out”. It is an enticing mid-tempo rock song that catches steam at the chorus as Fitz sings the memorable hook “There’s no easy way out.” Fitz sings about how life isn’t always easy, but looking within yourself to stay positive is the best way to deal with what is thrown your way. It’s a perfect opener and the song that sticks with you the most.

The following track, “Money,” evokes a bit of AC/DC with its opening salvo of distorted chords.  Fitz warns about the trappings that love of money can bring. Bringing the sizzle and crunch to the track is Patrick Dean Bostrom, lead guitarist for the legendary Salton Sea punk band, Throw Rag. Along with his guitar playing, Bostrom also contributes high pitched backing vocals that work nicely in juxtaposition to Fitz’s deep baritone.

The record offers some diversity, especially with the fourth track. The sound of a choir opens, “Who Are We.” With piano playing the lead instrument, harmonizing guitar parts and layered vocals, the song is reminiscent of something you might hear in Queen’s music. Of course Fitz’s voice is completely opposite that of Freddie Mercury. In this track Fitz’s trademark delivery is even more spoken than sung. In truth, this is really a gospel song. Certainly the vocals create that feeling, but Fitz’s words are like that of a preacher, reminding and inspiring us about the people we are and the people we could be.

The diversity continues with “As Long As I’m With You” and “Worry”. These are both much different from the earlier tracks. “As Long As I’m With You” might just be a love song to his wife and co-writer, Wendy. But the music itself is intriguing and trippy. “Worry” is an acoustic based song that speaks of the most common problem with humanity – worry. “Worry. Worry. It’s a terrible thing. Has no place in a life worth living.” Regardless of your opinion on Fitz’s music, the words here are spot on. So much of the human condition revolves around fear and worry. And it can be stifling. After the title track, this is the most memorable.

The album finishes with “Citizens of the Universe,” a live take with Penny University. The composition, harmonies and lyrics evoke the feeling of a few decades ago, perhaps the late 60’s or early 70’s. It is a beautiful song that reminds us we are all part of this one existence.

Recorded at 17th Street Studios, in Costa Mesa, CA, this record is polished and solid. The songwriting, engineering and production from Fitz’s collaborator – Lewis Richards – and his wife, Wendy, are apparent throughout.

There are many things that are appealing about Jimi Fitz’s music, but none so much as his voice. Fitz has been making music and spearheading radio shows since the 1980’s. His voice is the reason. The deep tenor of his delivery can be mesmerizing. Fitz has had much success with his annual fall show at the McCallum Theater in Palm Desert, CA. Part of that is delivering music that has a bit of an edge to it, without turning a listener off. The lyrics to his songs are simple, poignant and without pretension. He doesn’t have to paint an abstract idea to his listeners. He is giving you his thoughts in straight forward terms.

To check out this record, and more music from Jimi Fitz, go to www.jimifitz.com