Jonas Udcoff, CEO of Cord Media in Palm Desert, was born in New York, raised in Chicago, and attended Illinois State where he received his Bachelor’s degree in Broadcast Journalism. He moved to the Coachella Valley in 1997.

His first job in the valley was working as a bartender at the old TGI Fridays in Palm Desert. That is where he met the General Sales Manager for KESQ, who told him he would introduce him to the News Director, as Udcoff had dreamed of being a newscaster growing up. However, after meeting with the station he decided he couldn’t afford to live on the salary of a news producer or entry level reporter. They offered him a sales position that was commission only and that was the beginning of how Jonas Udcoff has become one of the most successful businessmen in town.

“I was really aggressive,” shared Udcoff. “My success there was about having long term client retention.” He worked there from 1997 to early 2002, until he was recruited by Bob Hoffman, who is currently the COO at Cord Media, but at the time owned 3 CBS affiliates.

“At the time Bob met the Houston family who was looking to bring a local CBS affiliate here and they looked to see who was the largest biller of TV sales locally. I was the first one called and they offered me a job. At that point I was the youngest General Sales Manager for a big 3 affiliate and at that time I was 28,” shared Udcoff.

He left there in 2007. He and wife Jaci Fitzsimonds worked together at CBS and when he left there they started Cord Media. After buying out a partner, in less than a year, it was just the two of them. They originally started out as a video production, infomercial business with a TV show called “New Home Television” but opening a business that’s going to specialize in new home builders in late 2007 was bad timing.

Udcoff says he got where he is today because of a lot of “hard work”.

“It was Jaci and I at the kitchen table and the builders weren’t paying us because they were going bankrupt,” shared Udcoff. “We had the clients, we had the receivables, but we weren’t being paid what we were owed. And then in late 2008 we got some breaks.”

“Jaci was pregnant at the time with our daughter and we found this space we’re in now that had 3 small offices and we hired an assistant and it was just the 3 of us. Then we got a few accounts like Family Development, Teserra and Spotlight 29, and those were the 3 that anchored us,” said Udcoff. 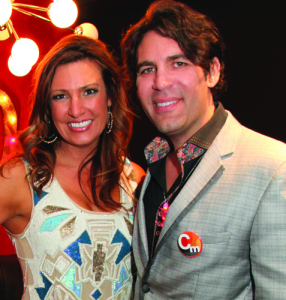 Jonas and Jaci have gone from the kitchen table, to 649 sq. ft. of office, to over 10,000 sq. ft. in their current location. They now have 39 employees and are continually growing and boast a serious roster of high end clients. Many of them are Indian Casino’s across the country.

“We handle everything in house. We do it all; video producers, web designers, graphics, writers, all under one roof,” said Udcoff. “If you achieve your client’s goals everything else will fall into place. Jaci and I actually worry about our client’s well-being and not just if they’re going to have enough money to pay us, but for instance some of these home builders that might be going out of business, we’re lying asleep at night thinking about what we can do to help them. So if we put their goals before ours then all the sudden you go from that kitchen table to here.”

The charities that Udcoff supports are the Native American Culture, The Cancer Foundation and Desert Aids Project.

What motivates him is creating new ideas and presenting a new pitch. He says his best trait is his work ethic. “He doesn’t stop,” insists his wife Jaci, President of Cord Media. “He’s up at 3:30am thinking about the business.”

When asked what he enjoys in his down time he chuckled, saying, “What down time?” Then he went on to share that he enjoys going to the beach and watching gangster movies like Scarface and The Godfather Part 2.

He said he was currently listening to AC/DC, but his musical tastes run the gamut from country rock like Luke Bryan and Jason Aldean, to rap artists like Jay Z, Tupac and Kanye.

When asked what people would be surprised to know about him he said: “A lot of people think I’m unapproachable, I will say that, but I’m definitely harder on the outside. There’s very little that’s fake about me. But once people get to know me I’m an overly loyal person to friends, family and employees.”

The most defining moment of his life: “When I met my wife.”