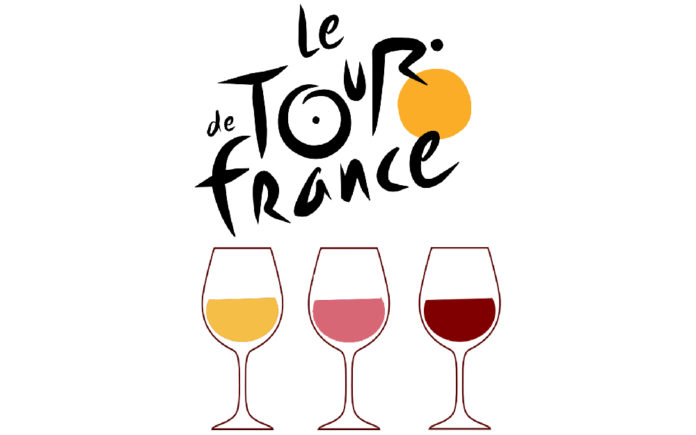 The Wine Tour of France 2018! is what we’re calling this piece as we mix in the current bicycling championships with a couple local wine selections that the spectators, there in France and the spectators here at home, can partake as we follow along the route and stages of this annual grand event.

I’m thinking most of you wine enthusiasts—especially the French wine lovers in the group, are familiar with this major sports event.  Champion cyclist Lance Armstrong brought the Tour de France to America’s attention when he won that painstaking event seven consecutive times from 1999 to 2005—but, unfortunately for the sports world, using overt deception to evade drug-enhancing detection. As a result, he was stripped of his Tour de France titles. Interestingly, in a 2015 interview with BBC News, Armstrong stated that if it was still 1995, he would “probably do it again.”

As a college student, I came upon the Tour de France early in my French travels.  After spending most of my money in Paris, I realized I needed to get to the South of France stat!  After having a ball in Bordeaux, I took a very long train ride to Nice and fortuitously met up with the Tour’s “le peleton”—the main pack of riders, whizzing into town and finishing the stage for the day.  There was so much wine & partying through the evening & night, I don’t see how the cyclists got any sleep.  We spectators and fans certainly didn’t.

And who knew? Back then I didn’t know that the Tour began in 1903 and modernly consists of 20+ or so day-long segments or stages, over a three-week period, covering around 2,200 miles. The race alternates between clockwise and counterclockwise circuits of France and at times occasionally dipping into bordering countries such Spain, Andorra, Switzerland and Belgium.

It’s the largest annual sporting event on the planet and not just the world’s biggest bike race.  The press writes, “There is a massive support staff as well as journalists, police officers, mechanics, chefs (of course chefs!) and many more people who literally help put the show on the road. It’s amazing logistics: thousands of people move almost every day from one town to the next like a mini city on wheels.”

When I witnessed the race, the course that year was figuratively a clockwise hexagonal border tour of France, starting and ending in Paris.  Indeed, the French used to refer to their own country as l’hexagon—the five-sided country.  This year, for the 105th edition, there are two geographically distinct areas of the race: in the north of France and in the south.

Running from Saturday July 7th to Sunday July 29th, this year’s tour will be made up of 21 stages and will cover a total distance of 2,080 miles.  Except for a short visit of around nine miles in Spain the Tour will never go out of the borders of France.  It will include a total of 26 mountain or hill climbs that include the Alps and the Pyrenees, and, 8 flat stages; there are only two rest days.  Of interest, during the 9th stage, there will be 13+ miles of cobbled-stone roads for the cyclists to maintain their cool!

So it’s summertime—and, with the French just having won soccer’s World Cup, why not continue to frolic French by considering & enjoying a couple of the famous wines from the two areas that the Tour de France is passing through.

As mentioned above, this year’s two-part geographical race scheme starts in the North Atlantic area just south of Nantes nearby the famed Loire River.  The wine country of Brittany is sometimes known as “Neptune’s vineyard”, where the sea meets the River.  Glorious seafood in abundance, where the gods have provided wines that are crisp, fresh, lively & tasty that match perfectly with plates of shrimp, oysters, mussels, and fish.

Muscadet [moos-kah-DAY] is the name of the wine, not the place or a grape (where in Muscadet’s case—the grape is Chardonnay’s cousin, Melon de Bourgogne).  This is a very light-bodied, very dry white that is slightly salty but balanced with welcomed acidity. It shows flavors of anise, green apples, flowers, grapefruit, lemon, lime, melon, minerals, peaches, pears, sea breeze and yeast.

In other words, Muscadet could well be the signature wine of the Coachella Valley. Serve this chilled to around 45 degrees and it will handle the heat of the day and every appetizer, salad, white meat and shellfish dish around the table.

Look for the labels containing the words Muscadet Sèvre-et-Maine for very bright and crisp wines.  The labels that also include the term sur lie, mean they have been aged a bit for added flavor complexity and richness.  A good bottle can be found at your local wine purveyor for around $12.

The 10th, 11th and 12th stages of the race take place just south of the Jura Mountains in the east of France bordering Switzerland.   There are woodlands and meadows about; and, its appellations of Arbois and Cotes du Jura own wholly original ancient grapes that are the fascination of vino lovers and foodies.

The late-ripening Savagnin grape is made like a sherry—with oxidation. With a blend of local Chardonnay, the fresh version provides a hazelnut note that is delightful and distinctive.

The other version, known as Vin Jaune [van-ZHOHN], is the famous strong “yellow wine of Jura” where the Savagnin grapes are picked as ripe as possible, fermented and then left in old Burgundian barrels for over six years. It can age for a century! This wine is not for the faint of heart—crazy flavors of apples, smoke, nuts and nutmeg, citrus and spices. It needs adequate decanting and aeration as it is very aromatic and intense.  The French love this wine with the local poulet de Bresse along with Comte cheese. This combo should be on your bucket list!

Cheers to the Winner!