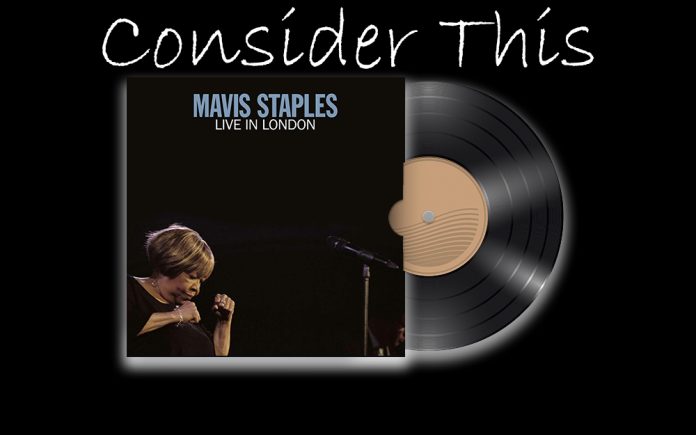 Mavis Staples is a force of nature, that’s an indisputable fact. She’s lived a thousand lives to your one. She turned 80 in July and celebrated that milestone with a new live set entitled Live In London.

Music was a family affair for Mavis, who began performing professionally in 1950 as part of The Staple Singers. Initially, they played churches and on local radio. A true family affair, the group included sisters Cleotha and Yvonne, her brother Pervis, and their dad, Robuck “Pops” Staples on guitar.

Gospel was The Staple Singers’ original lingua franca, but throughout the years, they embraced Soul, R&B, Folk and Rock N’ Roll, putting their imprimatur on Bob Dylan’s “A Hard Rain’s A Gonna Fall,” Buffalo Springfield’s “For What It’s Worth” and The Band’s “The Weight.” They quickly recognized there was a spiritual quality embedded in these most secular songs that mirrored the struggles of the Civil Rights movement.

From the beginning they cycled through a series of small, independent labels, but in 1968 they signed with Stax/Volt. The Memphis, Tennessee label began life in 1957 as a movie theatre converted into a recording studio. Although it wasn’t as nationally recognized as Motown and Atlantic, their roster included an impressive array of talent including Booker T. & The MGs, Otis Redding, Isaac Hayes, Johnny Taylor, Eddie Floyd and Sam & Dave.

At Stax, The Staple Singers achieved critical and commercial success, crossing over to mainstream radio. Between 1971 and 1975 they had eight songs reach the Top 40, including “Respect Yourself,” “I’ll Take You There,” and “If You’re Ready (Come Go With Me).” Their spiritual sound wed themes of self-empowerment to an infectious, sanctified Soul-Funk groove. Their momentum stalled during the Disco era, and this is when Mavis first struck out on her own. Her solo output during the ‘70s and ‘80s was sporadic, but in 1989, her most famous fan, Prince, signed her to his Paisley Park label.

Prince produced two albums for Mavis, Time Waits For No One in 1989 and The Voice in 1993. A couple of years later she returned to her roots with Spirituals & Gospels. It would be eight years before she would make another album. At the end of the 20th century The Staple Singers were inducted into the Rock & Roll Hall Of Fame, less than a year later, Pops Staples passed away, following complications from a concussion.

Mavis made a stunning return in 2004 with Have A Little Faith, a collection of Blues, Folk and Gospel songs released through the Alligator label. Three years later she signed with Anti-, an offshoot of the venerable indie label Epitaph. Anti- boasts a disparate stable of artists including Neko Case, Marianne Faithfull, Merle Haggard, Beth Orton and Tom Waits.

Released in 2007, her first Anti- effort paired Mavis with musician/producer Ry Cooder for We’ll Never Turn Back a collection of Civil Rights era protest songs. Three years later she partnered with her musical soul-mate Jeff Tweedy. He is best known for establishing the alt.country style that originated in the late ‘80s, with Jay Farrar in Uncle Tupelo, and more lastingly as the front-man for Wilco. As Illinois natives Mavis and Tweedy connected on myriad levels, and their first collaboration, You Are Not Alone arrived in 2010 and won a Grammy for Best Americana Album. They have worked together two more times for 2013’s One True Vine and 2017’s If All I Was Was Black. In between she enlisted musician M. Ward to produce her Livin’ On A High Note album, which was released in 2016.

Three songs from Livin’ On A High Note crop up on the new live set, “Love And Trust,” “Take Us Back” and “Dedicated.” The record kicks into gear with “Love And Trust.” Mavis finds the sweet spot between Blues and Gospel as guitars sting and squall beneath her authoritative rasp. The quicksilver call and response on the consecrated chorus walks the line; “Do all you can, do what you must/Oh Lord! We want some love and trust.”

Both “Take Us Back” and “Dedicated” offer tart tributes to her dad, Pops, her siblings and her hometown of Chicago. The former blends slinky guitar, sidewinding bass lines and a rattle-trap rhythm. Mavis is playful and good-natured as she notes “Sometimes people take all they can get from you, but they don’t call me Bubbles for nothing now, people ask my Pops he’ll tell them now, She gets it from me baby, she gets it from me darling/Chicago wasn’t always easy, but love made the Windy City breezy.”

A rippling guitar intro opens the latter, shadowed by brawny bass and a thwoking beat. Mavis’ vocals are hushed and intimate as she confides “There was a time I thought half the friends you got were counterfeit at best, and you thought it wasn’t right how I lived my life, but time put those thoughts to rest/And if it’s us against the world, well I would be on us to come out on top, but if you go your way and I go mine, all bets are off.”

Mavis and Jeff Tweedy’s musical symbiosis is on full display with two cuts from One True Vine, and two from If All I Was Was Black. Somehow, he has managed to channel her voice into his songs. Take “You Are Not Alone,” a study in compassion, the song is powered by flange-y guitar, rumbling bass and a tick-tock beat. Mavis’ vocals are warm and empathetic as she gently asserts “You are not alone, I’m with you, I’m lonely too/What’s that song, can it be sung by two?”

Her mien is frisky and assured on “We’re Going To Make It,” bolstered by shang-a-lang guitars, tensile bass and a loping rhythm. Lyrics promise that even as times are tough, love, to quote the Captain and Tenille, will keep them together; “…If a job is hard to find, and we have to stand in the welfare line/I’ve got your love and know you’ve got mine, and we’re going to make it.” The song takes on a tent-revival fervor as the audience joins in.

The political gets personal on “Who Told You That,” which directly addresses a racial divide that has only widened since a certain spray-tanned espot has taken up residence at 1600 Pennsylvania Ave. Blistering guitar riffs are bookended by walking bass lines and a ricochet rhythm. Emotions are on a knife’s edge, Mavis is elegantly defiant when told “Now hold back, my, my, don’t explode, we don’t want to rock the boat” He incredulous reply; “Who told you that?” A gritty guitar solo on the break underscores her urgency.

Finally, “No Time For Crying” is an powerful cri de couer. A greasy Soul-Funk boogaloo, it builds off a powerful four-on-the-floor beat, slithery guitars and sinewy bass runs. Guitars crackle and fuzz ratcheting up the tension, mirroring the urgency behind the Black Lives Matter movement. Mavis has no time to explicate or equivocate when lives hang in the balance; “People are dyin’ bullets are flyin/No time for tears, no time for tears, we got work to do.”

As usual, Mavis offers a couple of trenchant cover songs. First, she puts her stamp on a particularly Funkified Talking Heads song, “Slippery People.” The Staple Singers originally recorded a version of the song in 1984, but it kind of slipped (get it?) through the cracks. This arrangement is more fluid, anchored by roiling bass lines, a crushing backbeat and guitars that wah-wah, chicken scratch and glide. The scorching guitar solo on the break is positively incendiary.

Meanwhile, her rendition of the George Clinton/Funkadelic classic “Can You Get To That” jettisons the sing-a-long quality of the original, locking into a swampy groove. Razor-sharp guitar notes cascade over angular bass and a thumpy beat. There’s a measure of authenticity to Mavis’ vocals as she confronts past betrayals; “I recollect with mixed emotions all the good times we used to have/But you were making preparations for the coming separation, and you blew everything you had..” but then she sorta turns the other cheek with this cutting observation; “When you base your love on credit, and your loving days are done/Checks you signed with love and kisses later come back ‘insufficient funds,’ can you get to that?”

As is her tradition, Mavis includes a Pops Staples song on all of her records. This time, she resurrects “What You Gonna Do,” which the Staple Singers originally recorded in the mid ‘60s. She also offers a sly and slippery take of the Staple Singers’ 1975 hit “Let’s Do It Again,” impishly tipping her hat to the song’s writer and producer at the end; “Curtis Mayfield, Y’all!”

The album closes with band intros and a faithful reading of the Staple Singers’ #3 hit, “Touch A Hand.” But just before, the audience joins in on an impromptu chorus of “Happy Birthday” to Mavis. She playfully chimes in, noting “Yes, I tell you, I’m thankful and I’m grateful to make another year. Yes indeed, I tell you, it just ain’t no stoppin’ me, is it?” followed by a wry chuckle. That about sums it up.

Mavis is ably supported here by her long-time touring band, which includes guitarist Rick Holmstrom, bassist Jeff Turmes, drummer Stephen Hodges and backing vocalists Donny Gerrard and Vicki Randle. The record is dedicated “To my loving sister and best friend, Yvonne Staples, we will love you always, Yvonne.” Her older sister, who had toured with her as a back-up singer and road manager, passed a way in 2018 after losing her battle with colon cancer.

Nearly 70 years after she began singing professionally, and over 50 years after the Staple Singers signed with Stax, Mavis is still here. She’s railed against social injustice for over half a century; she has performed for Presidents (Obama) and Kings (Martin Luther). She actually turned down a marriage proposal from Bob Dylan back in the ‘60s. She’s fought the good fight and she’s persevered. The case can be made that she’s created her most vital and enduring body of work over the last 15 years.

Live In London is a celebration, an evocation and a benediction.