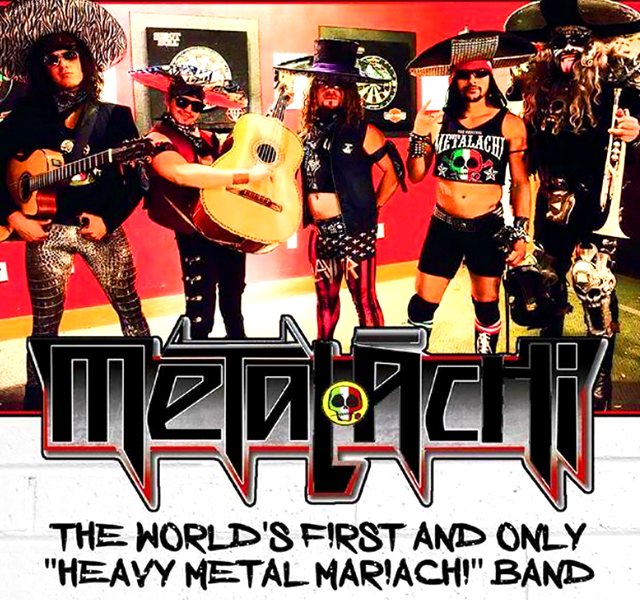 Metalachi has performed in the desert several times now and each show has brought a high energy mariachi + metal + comedy show that cannot be duplicated. This Friday, November 4th at 9 p.m. at the Date Shed in Indio, Metalachi continues its metal dominance of the lively Mexican street music played with brass instruments and guitars traditionally performed at weddings and Quinceañeras. Tickets are available at ticketfly.com and at Old Town Barbershop & Shave Parlor on Miles Avenue in Indio. I spoke with Metalachi ‘unmasked’ this past week to give us a glimpse ‘behind the scenes’.

What do you like about performing in the Coachella Valley?

“Every time we come to the Coachella Valley we are received with the warmest of welcomes. We are so fortunate to have a fan base that is so loyal to us and what we represent. We call it ‘Metalachi Nation’! That is what we enjoy the most about coming down to the desert cities; our fans and what they bring to every Metalachi concert. They are loud, sing along and they are the life of the party!”

Have there been any songs you’ve had difficulty playing mariachi style?

“Not that they are difficult to play in mariachi, but they might not have the same punch as that of the original song on its own as metal. I believe any song can be played with mariachi instruments but won’t necessarily mean it will be to our liking. There have been a couple of songs we’ve worked on but that at the end we decided not to keep because either the audience doesn’t react to it as we would like or because it needs more work.”

What do you do when you’re not playing mariachi and being funny?

“When we’re not on tour we have rehearsals at least one time a week so as to not forget the songs or to work on new ones. We also work on our new Metalachi Podcast where we already have 1,500 downloads! I don’t feel like we stop being funny. Being funny is a way of life and helps us maintain that humorous attitude towards living. There are of course certain circumstances where we need to be serious and we know how to flip the switch when need be.”

What’s it like when the band members are hanging out on an ‘off’ day?

“When we are on tour and have days off we usually look for places to go. For example, we look for caverns around the area and to see new places. We go to the movies, exercise or if someone wants to stay at the hotel they can just chill. It’s always a good time. We try to keep it interesting and of course try to rest when we have days off if the schedule is tight.”

What do you want to relay to your fans in the Coachella Valley?

“We just want to invite everyone to come and party with us at the Date Shed and to remember to get their livers ready for all the tequila that will be consumed because the more you drink the better we sound ha-ha! But on a serious note, we would love to see everyone there to rock out with your taco out!

We’ll have shirts, stickers and CDs for sale. Also I would like to let them know that our new album is done and we’re in the mastering process so look for it soon on iTunes! WE LOVE YOU METALACHI NATION!”

Find the Metalachi Podcast on iTunes 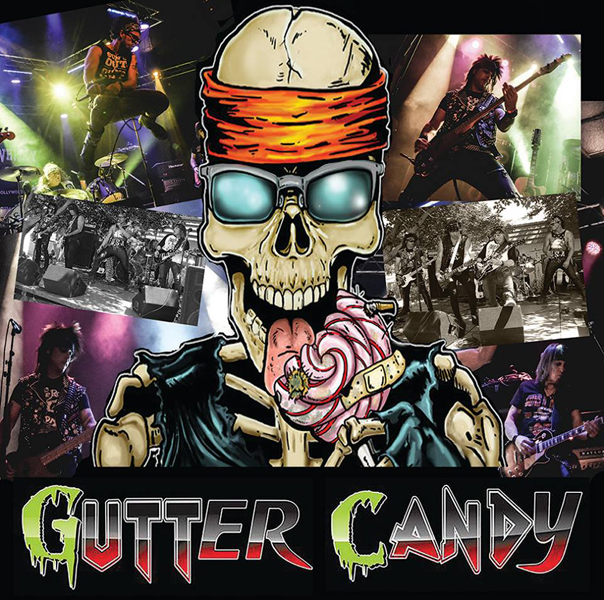 Coachella Valley Weekly chewed the fat with Jersey Dagger, lead vocalist for Gutter Candy this past week as they prepared to provide support to Metalachi this Friday at the Date Shed in Indio. The hard rock, classic punk & metal band is based out of Joshua Tree, CA.

What’s the premise behind Gutter Candy?

“Gutter Candy was late to the ‘hard rock’ party as the 90’s swept away hair metal on the Sunset Strip and handed the rock star crown to the likes of Nirvana and Green Day. However, this merry band of rock ‘n’ roll wannabes would survive with leather jackets, cheetah print skinny jeans, and studded belts intact. More than two decades later singer Jersey Dagger, drummer Sin Balls, bassist D.D. Gunz, and guitarists Lixxx Candy and Shawn Smash would hit the Hollywood club circuit to promote the release of their first five song EP, Come Guzzling (2015). Vowing to revive the hard rock landscape of the late 80’s and early 90’s Gutter Candy would not only release their own original material but would also launch a ‘cover tribute show’ to this era performing songs by the best hard rock, sunset strip metal, punk, and alternative indie rock acts, as well as early classic punk bands like The Ramones. Most notably, Gutter Candy has performed an almost yearlong residency at the popular Palm Springs night club, Tryst, which is located next to the Hard Rock Hotel on Indian Canyon Drive, an area of Palm Springs that the band has now referred to as the new ‘Sunset Strip’ performing a Saturday night showcase of their cover-tribute show called ‘Hard Rock Radio’. Popular in their home state of California, their notoriety has grown primarily from their cover song-tribute act, satirical comedic stage show and loud attire. Gutter Candy has also garnered a strong reputation in the United Kingdom and Europe, as well as Thailand and Vietnam, for their unique personas and their original songs. They have obtained substantial airplay for the first single off their five song EP Come Guzzling entitled “Ricky Skittles.””

What should Date Shed patrons expect from Gutter Candy on 11/4/2016?

What’s next for Gutter Candy?

“We will be returning to the studio in early 2017 to record two new original tracks as well as our own version of Tom Petty’s “Free Fallin’”; other than that, just trying to avoid collection agencies and incarceration.” 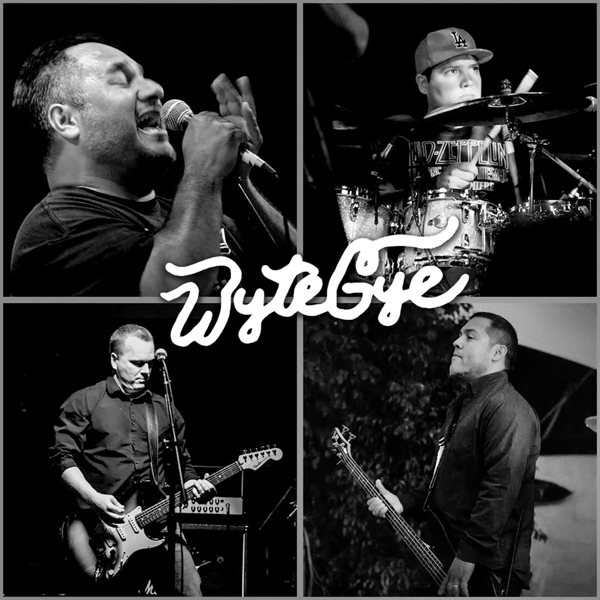 “Simply put, Wyte Gye is an attitude. We are just four dudes from Indio, California who have a passion for rock music. We are more than fans. We took it a step further and decided to share our enthusiasm for the music with others in a live setting. Wyte Gye is the epitome of a ‘party band’. On guitar we have Eric ‘WYTE GYE’ Willman, on bass Michael Jimenez, on drums Dominic Jimenez, and on vocals Noe Gutierrez. Having filled numerous Coachella Valley venues to capacity with its fan base, the ‘Wyte Gye Brigade,’ Wyte Gye creates an atmosphere of intoxicating auditory pleasure. Wyte Gye has performed over 250 different hard and heavy classic rock songs during its 12 years in existence. Performing renditions of songs from AC/DC to ZZ Top, these gyes know how to stay true to the song while putting their own stamp on it. If you are looking for a guaranteed great time and a way to momentarily detach from life’s stressors, you WILL be at the next Wyte Gye show Friday, November 4, 2016 at The Date Shed kicking off the night for GUTTER CANDY & THE MIGHTY METALACHI!”