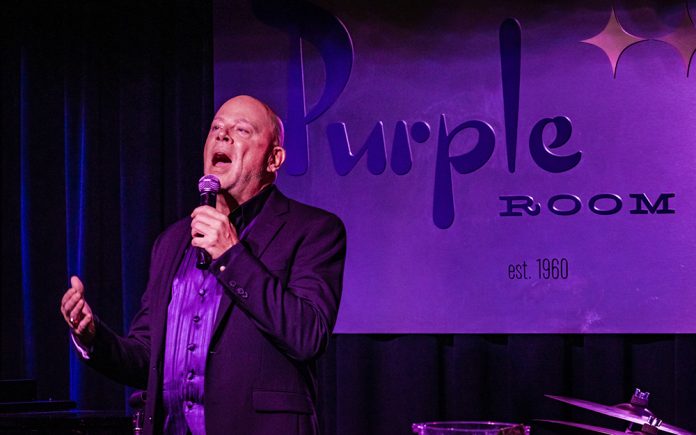 The stage is set, illuminated with the sensuous glow of violet lights and the glittering jewels of chandeliers dangling from the ceiling. With the downtempo of classic jazz standards wafting through the dining room and bar, the Purple Room transports patrons back in time to 1960s Palm Springs—exuding luxury and musical sophistication. The headliner of the night, Michael Holmes, takes his place front and center with the microphone in hand, crooning a medley of staples like “The Girl From Ipanema” and “Fly Me to the Moon” with a soft but controlled voice to the evening crowd. Applause follows, and Holmes has arrived.

Not only does he perform, but Holmes is also the owner of the historic Purple Room—where legends among the likes of Frank Sinatra, Sammy Davis Jr., and Dean Martin performed during their heyday decades ago. The venue is also known to be frequented by some famous names like Amanda McBroom, The Black Market Trust, and Lainie Kazan.

“When I moved to Palm Springs from the Midwest, I got here on a Saturday, met a pianist on a Monday, and did my first show on a Wednesday. That was in 2008 and I haven’t stopped since,” stated Holmes.

Although he started out as a singer in the Purple Room, Holmes bought the club in 2015, using his background in business to his advantage as he previously managed all the restaurants in the Palmer House hotel in Chicago.

Holmes performs on a weekly basis at the Purple Room, treating audiences to various selections from the Great American Songbook every Wednesday as he leads the Michael Holmes Trio, and starring in the Judy Show on Sundays. A parody of the 1963 CBS television show, The Judy Garland Show, the Judy Show begins at 7 p.m. and features Holmes dressed in tribute to the iconic star with an ensemble of other characters as well.

“It’s really fun bringing those characters to life. People ask me, ‘why don’t you do someone like Britney Spears?’ Problem is, she’s not really a character. You can replicate it, but there’s nothing funny about it. Someone like Bette Davis, on the other hand, is hysterical,” said Holmes.

Music has played a prevalent part in Holmes’ life, starting in his youth when he taught himself to play the piano while staying at home with his brother who was diagnosed with cerebral palsy. He also played in a band in high school—never learning to read music, but did manage to play by ear.

The genre that resonated most with Holmes was jazz, even though he admits that the classic Rat Pack tunes were a bit before his time. He still connects with the soulful sounds and messages of each song and recognizes that it transcends generations.

“I think it’s romantic. There’s a lot of emotional storytelling involved—be it joyful or sad—in so many great love songs that I’ve always been attracted to ever since I was a little kid,” explained Holmes.

In addition to the piano, Holmes taught himself to play the viola and trumpet. He also honed his vocal talent over the years and has not been professionally trained, although he did seek out lessons at the start of his career. 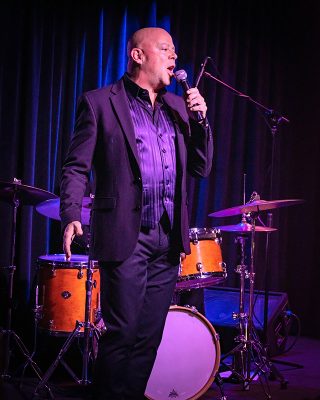 “When I was in college in the suburbs of Chicago, I saved up all my money to study with a voice teacher who was supposed to be the best. I worked with her for a month, then she gave me my money back and told me that I would never sing and that I should go into business. So I did for many years after that,” revealed Holmes.

During the time Holmes pursued business, he found success in his profession but was not fulfilled in the path he had taken. He realized singing was what made him happy. To this day, Holmes finds that revelation to be true, as he loves the thrill he gets from performing in front of an audience.

In addition to pursuing his passion, Holmes is also glad he moved to the Coachella Valley, as he has truly made a home for himself in Palm Springs that he hopes will be a permanent residency.

“I have no intention of ever leaving Palm Springs. It’s a big little town. It’s somewhat cosmopolitan—sophisticated, charming, and friendly. There’s so much support and the weather is great,” said Holmes.

As far as future aspirations go, Holmes wants to continue mentoring people who have a goal of making it as professional musicians, and encourages those starting out to follow their dreams and ignore the people who tell them they can’t make it. After all, Holmes was told he should stick with business, and he has—all while pursuing his passion under his own terms.

“I’m a little bit of a control freak. I would rather just sing all the time, but I would want everything exactly how I want it to be, and in order to do that, I have to run it,” said Holmes.

The Purple Room is open to the public at 4 p.m. on Monday through Sunday, from September to July.