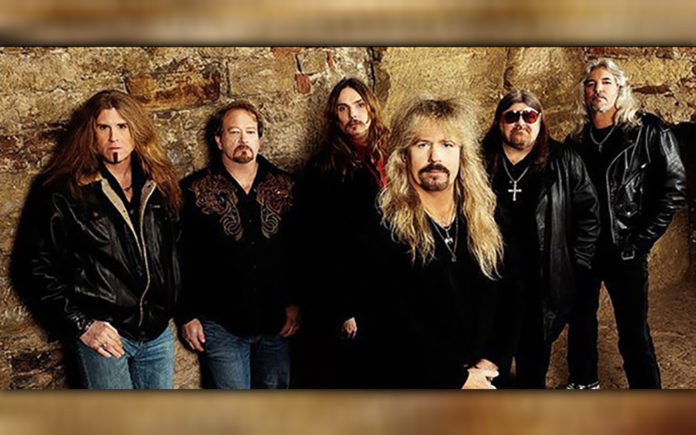 Stagecoach is “Flirting with Disaster” in a legendary way as southern rock band, Molly Hatchet, a band that has been “Beatin’ The Odds” for 40 years promises to “Take No Prisoners.”  All crafty uses of Molly Hatchet song titles aside, faces and brains will be melted as these guys pack as much of their 40-year existence into the one hour they’ve been allotted on the Palomino Stage, this Friday night.

I had the chance to have a heart to heart chat with Bobby Ingram, the longest standing member of Molly Hatchet – a bad ass musician as well as a guy with a bachelor’s degree in accounting, and who is now pursuing a law degree. There are those that would complain that Molly Hatchet no longer has any of the original players in it.  Others would offer that there is one man that has put it upon himself to keep Molly Hatchet rocking, touring and recording so that fans can throw their fists up and enjoy all that only this band can bring them.  Bobby Ingram would be that man. He has been a part of Molly Hatchet for over 30 years. The road has been long and at times treacherous and deeply painful – such is the music industry. Ingram shared openly about what it has taken and what the payoff is:

“Molly Hatchet’s career is like a lot of groups that came out of the mid 70’s. There was a lot of road work, records, concerts and great times.  Molly Hatchet didn’t start out any less obscure than 38 Special and Lynyrd Skynyrd.  Danny Joe Brown (Hatchet’s original lead singer) and I started out together in Rum Creek for a couple of years before he went to play with Molly Hatchet. When Danny went to Molly Hatchet, I finished my accounting degree. Then, when Danny left MH after making Flirting with Disaster, he wound up at my house on a rainy Sunday afternoon, and asked for my help in putting a band together.  That became the Danny Joe Brown Band. It was good timing. I had just finished college and was ready to go on the road.  That’s when I met John Galvin, the keyboard player, who is still with us.”

“We had just finished one album and were on track for a second album when Danny went back to Molly Hatchet.  Then Galvin went to Molly Hatchet.  In 1987, I went to Molly Hatchet.  I am now the longest standing, consistent member, without any breaks, for the past 31 years.  It’s weirder than people think. I know the true meaning of the word dedication.  I learned it in high school marching band, that’s for sure. I learned it in college, along with determination and sacrifice. I especially learned it in Molly Hatchet, and I relearn it every day. I’ve never gotten to the point where I say everything is ok, because that’s when you drop your guard and things go out to left field for a bit. So, I’m very hands on with the band. I’m the sole owner of the intellectual property of the band.  I’ve worked half my life for it. I deserve to be here, or the good Lord wouldn’t let me be here, that’s for sure.”

“In all that time I have seen so many things, it’s hard to cover it in one interview, I guess. I’ve Worked with some incredible producers, like Glenn Johns who produced the Danny Joe Brown album.  He also worked with The Rolling Stones, Led Zeppelin, and even The Beatles some. I’ve worked Karl Richardson who did ‘Layla’ and ‘Saturday Night Fever.’ Since then, I’ve started producing the albums myself. I didn’t plan on it. It was suggested by the record company. Since I’ve worked with some of the best in the business, it seems like a natural progression. It’s hard to give your music to another person and ‘tell’ them what it’s supposed to sound like. When a band is in its formative years, it’s important to have a producer because they help them find direction in the formative years.  But I firmly believe that once you have enough experience, you need to exercise what you’ve learned and produce yourself.  We took the bull by the horns and did that in 1996. We have now signed a new recording agreement with our longtime friends at SPV GmbH (an independent German record label that has grown to be one of the largest independent distributors and record labels worldwide). We are coming out with a double live album this year and a studio record will follow.  The album cover will be done by Paul Raymond Gregory who has been a real part of the band.  It will not be pre-painted before the album is made – he will wait and listen to the album first and gain his inspiration from the music.  We are currently recording in Germany at the top of an alp with windmills and snow all around.  We’re making good rock and roll and concentrating on making the albums the best we can possibly make them.”

“I have always felt a need and strong desire to keep the Molly Hatchet tradition, legacy, and spirit alive and well, and to keep it on the road, playing concerts, and recording new albums. I’ve seen every member come and go in the last 31 years. I feel fortunate to be able to do it for so long and so consistently.  I’ve never faltered or stepped out on the group, so to speak. I never joined another band. This has been my baby for over three decades, and I’m proud of it. I know what kind of sacrifice it takes to make it happen. It’s all worth it to see the joy of the fans, to see their faces light up, and see them jumping up and down and hollering and forgetting their troubles. That’s the reward. That’s the payoff.”

Ingram showed the dedication and determination throughout his career with Molly Hatchet – many times in the face of deep loss – losses he didn’t mention in our interview but are public record. Ingram suffered the loss of his wife Stephanie during the tracking of the Warriors of Rainbow Bridge album. He would of course finish after a delay. Stephanie was the seventh member of Molly Hatchet and she did many things behind the scenes that no one ever saw. She was never the person that would ever want anything in return. Longtime friend, Danny Joe Brown passed away in 2005 from complications of diabetes he had suffered with for many years. In 2006, Duane Roland, guitarist of the band, passed away leaving a legacy that will never be forgotten. In 2005, Dave Hlubek, a founding member after playing in various bands around the United States has returned to Molly Hatchet after 20 years. Everyone was glad to see Dave having a good time and doing what he does best until his passing in September 2017.

Today, the band members are Bobby Ingram on lead, slide and acoustic guitar, John Galvin on keys and Hammond b3, Phil McCormack on lead vocals and harmonica, Tim Lindsey on bass, Shawn Beamer on drums.  “I have not replaced Dave, nor could I ever.  I don’t know what the future is in that regard. Southern rock is about more than just three guitar players. This is a home of Southern gentlemen. We take care of our family. We believe in God. We support our military… As we enter the next 40 years of music, Molly Hatchet’s tradition keeps developing the common bond of southern rockers and keeps our southern-style of music alive and well. Rest assured, Molly Hatchet is a band, that after 40 years, is always workin’ hard, playin’ tough, livin’ fast, and still Flirtin’ with Disaster!”