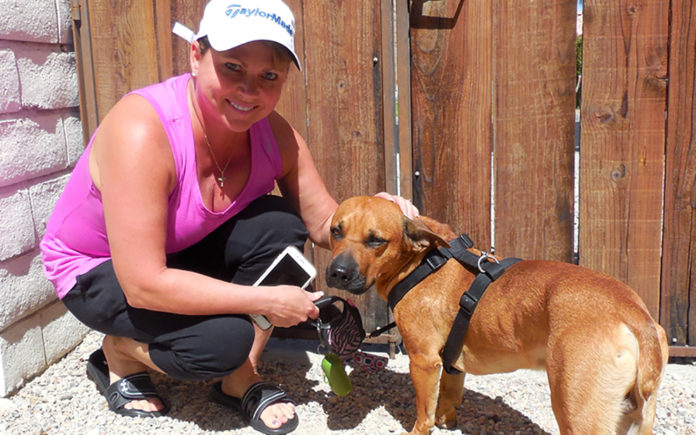 It was a happy ending for Munsey this week, pictured here with his new human, Dana McQuown.  Munsey and his two sibling dogs were left homeless when their 57-year-old human entered a hospice this month, stricken with terminal cancer.  There was no one selected to adopt these lovely pets, but fortunately friends stepped in and began networking the animals.  Animal lover Mark Green provided temporary foster care.  Mark decided to adopt one of the dogs, and the other fluffy pup was taken in by the owner’s niece.  However, Munsey lingered.  His sad face was posted all over Facebook where he garnered lots of sympathy, but no home.  Finally, Wendy Campbell put him on the website www.NextDoor.com and a wonderful home was found.

Munsey went to the vet this week where he received a clean bill of health.  He is blessed to be in a loving home, adored by two children who happily play with him.  His owner will leave this earth knowing that her dogs are safe in loving homes.

Munsey is one of the lucky dogs.  Sadly, over 500,000 cats and dogs end up in public shelters every year due to the death or incapacity of their humans.  Used to being in family homes, many of these animals become despondent or frightened in a kennel setting, and some will end up euthanized for a variety of reasons.  Some are senior animals who have given many years of love and comfort to their families.  Now they are older, often with medical problems of their own, and they are passed over in shelters for cute puppies and young frisky dogs.

The phone often rings at Loving All Animals with a familiar tale, “My mother just died and she left 4 dogs and 2 cats behind.  I leave town in 2 days, and live in an apartment that doesn’t allow pets.  I need to take these animals somewhere.”  You may tell yourself, “If anything happens to me, my kids will take my dog,” but later your daughter marries someone who is allergic to animals and your son has a full house of critters.  If you have an agreement with a friend or relative to take your pet, you must check in periodically to see if their situation has changed.

Palm Desert attorney, Henry Casden Esq. advises, “The California probate code allows one to create a trust and put assets there to fund care for the pets they leave behind. Those expenses can include food, veterinary care and grooming.  If they care about their domestic animals, including dogs, cats, horses or birds, people should make a plan for where those animals will go.  They can name a person as trustee who will oversee the distribution of the funds to care for them.  I especially recommend a pet trust for anyone who is in their 70’s or 80’s, as well as anyone who is in frail health.”  Casden does pet trusts at his local practice, and he can be reached at (855) 447-4442.

Do you want your pet to end up left behind alone in your home?  Do you want him to end up in a public shelter, heartbroken and alone?  Make a solid agreement with a friend or relative to take custody of your pet, and check in periodically to see if their situation has changed.  Make sure their housing situation allows for another animal.  Consult with an attorney about a pet trust.

Most people assume they’ll outlive their pets, says Barry Seltzer, a Toronto-based estate lawyer and co-author of Fat Cats & Lucky Dogs: How to Leave (Some of) Your Estate to Your Pet.  Death and disability are topics that many people refuse to face. The situation prompted Seltzer to pen a modified version of the Bible’s Proverbs 29:18:

Where there is no vision, pets perish.

And where there is no plan in place, pets perish.