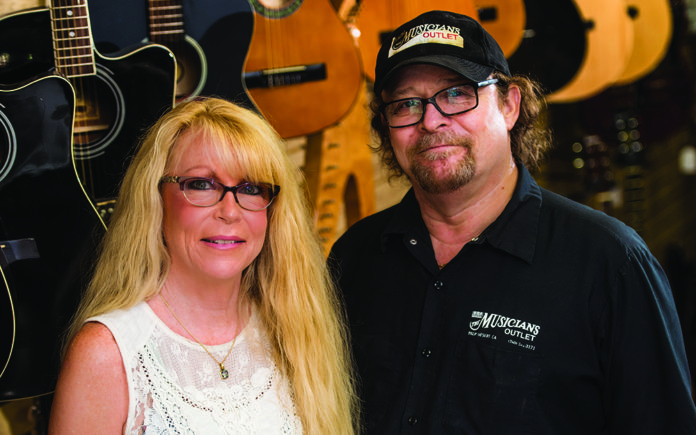 Musicians Outlet in Palm Desert will be closing its doors permanently this week after almost 32 years of providing the Coachella Valley with high-quality music products and services. From its inception, it has been independently owned and operated by Randy and Cindy Hewitson. Together, they gave us access to music lessons, sheet music, instrument repair. guitars, ukuleles, drums & percussion, brass/woodwind & strings, amplifiers, microphones, and everything under the musical sun.

We lost Randy on April 22, 2016 and along with his loss came the ambitious task of keeping Musicians Outlet alive and thriving. Cindy has done her best to secure her and Randy’s life’s work and now we honor all that the Hewitson’s and Musicians Outlet have done to better our lives through music.

Musicians Outlet has consistently been involved with the community. They have donated their time and services to fundraisers, festivals and churches. They have worked with virtually every venue and major event in the desert as well as provided support to every musician and band that has called upon them. They always went above and beyond the call of duty in whatever capacity they were involved.

The Coachella Valley will lose its only full-line independent music store this week. What we’ve gained cannot be measured and will carry on in the music of the desert’s musicians forever.

Wednesday, June 21, 2017 is ‘Make Music Day,’ a one-day event where free, live musical performances, opportunities to make music and other musical events take place around the world on the longest day of the year. I encourage everyone who is compelled, to make music in honor of the Hewitson’s and Musicians Outlet.

Ronnie King: “Many years ago I just got off a tour and cartage broke my keyboard. I had a session scheduled here in the desert. I called Randy and told him of my situation and of course he said, “Come get whatever keyboards you need from the store.” I took them right off the showroom floor. That’s who he was.”

John Stanley King: “I recall many private late night conversations in a building with hundreds of instruments; just walking around tapping on things and listening to different instruments. It was pretty cool.”

Steve Hall: “I was in a band with Randy called ‘Rumors’. We rehearsed at night in the store for years. I’ll never forget it.”