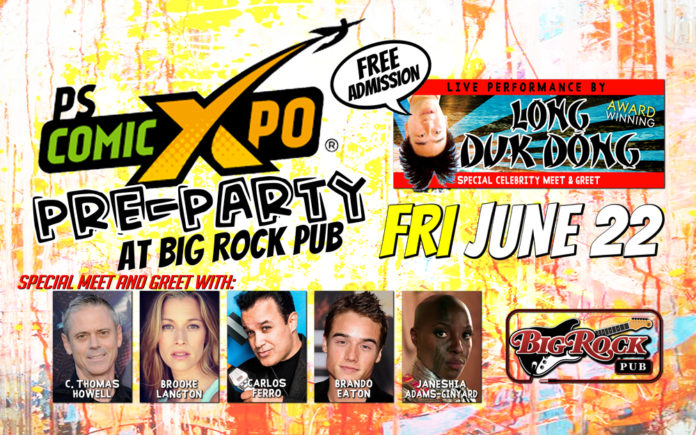 Comic and pop culture fans head to the Palm Springs Convention Center this weekend for PS Comic Xpo, Palm Springs’ premier comic convention, taking place from June 22 – 24. But before the event there’s the pre-party. On Friday, June 22, Big Rock Pub is hosting the pre-party, complete with special guests and live music from 8:30 to 11:30 pm.

This free pre-party includes a special celebrity meet and greet with some of the Comic Xpo guests. Among them: C. Thomas Howell, Brooke Langton, Brando Eaton, Carlos Ferro, and Janeshia Adams-Ginyard. Fans know Howell from his roles in The Outsiders (where he played Ponyboy), The Hitcher, E.T., The Punisher, and Criminal Minds. Brando Eaton starred in popular shows such as Dexter, Zoey 101, and Awkward, to name a few. Brooke Langton is best remembered from her role on Melrose Place, as well as Friday Night Lights, and The Replacements. Carlos Ferro is a voice actor who is known for his work on many video games and TV shows. Janeshia Adams-Ginyard is a stuntwoman and actress who most recently played the role of Dora Milaje in the box office smash, Black Panther. Partygoers will have the chance to chat with these stars, ask questions, and possibly get a photo with them.

As fans mingle with Comic Xpo celebrity guests, award-winning local band Long Duk Dong performs all night! Long Duk Dong, an 80s synth pop band, plays all your favorite covers from – you guessed it – the 80s. Big Rock Pub is proud to help kick off the PS Comic Xpo celebration. Join them this Friday at this FREE pre-party! This party is first-come, first-served – no reservations!

For more information, head to http://www.thebigrockpub.com/entertainment